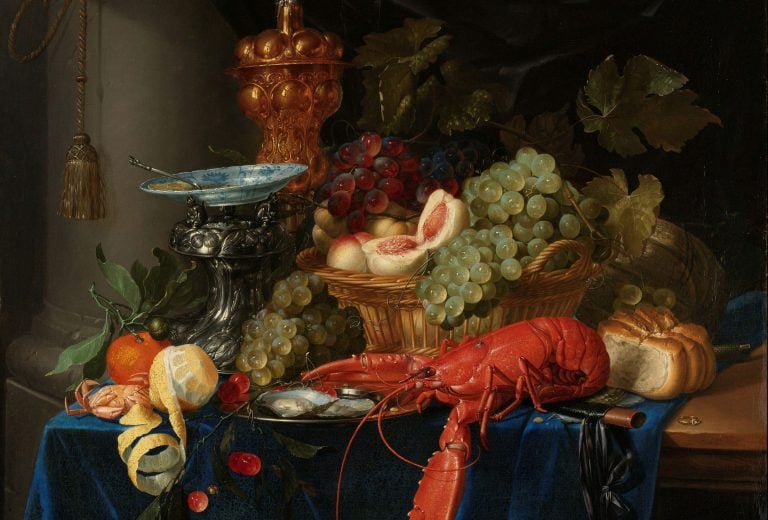 Why is food such a popular image for art and culture? For millennia it has been a source of inspiration from ancient Roman mosaics through Dutch Baroque paintings to modern foodie photographs. It is difficult to find a society that is not fascinated with its food. Food appeals to the emotions and senses. It can be beautiful, delicious, and comforting. It can be a source of pride and tradition. The Dutch Golden Age was not immune to this obsession with food. Artists like Pieter de Ring captured glorious banquets on canvas to be feasts for the eyes and minds of their viewers. Still Life with a Golden Goblet is a magnificent example of this artistic tradition. It explores not only the physical aspects but also the cultural implications of its food. Pieter de Ring was a master chef of the canvas.

Spain ruled the Netherlands for most of the 16th century until the Netherlands fought and won its independence in 1648. The country officially declared itself the United Provinces of the Netherlands, but quickly became known as the Dutch Republic. It was a proudly Protestant country rejecting the rule of the Catholic Church. The Dutch Republic also became an extremely prosperous country through its seafaring trade and far-flung colonies. Therefore, the Dutch Republic was a country lacking in the two traditional patrons of art: royalty and the Catholic Church. Consequently, the prosperous merchants, bankers, and businessmen of the rising middle-class became the cornerstone of the Dutch art market.

The moneyed middle-class patrons appreciated secular themes such as portraits, still-lifes, genre scenes, and landscapes. Artists like Pieter de Ring captured this burgeoning market by specializing and cornering in one particular theme. Pieter de Ring specialized and became famous for his opulent banquet still-lifes. Still Life with a Golden Goblet is one of his most famous examples.

Still Life with a Golden Goblet is an absolutely gorgeous painting full of vibrant colors, strong contrasts, and sharp lines. Fruits and seafood dominate the composition. The most striking object is the red lobster sitting in the foreground. This delicious creature is rendered with scientific observation. It is precisely depicted with realistic proportions, anatomy, and coloring. Pieter de Ring clearly studied the shapes, contours, and lines of the lobster when painting its image. Besides being visually appealing, the red lobster also has cultural implications of luxury, wealth, gluttony, and death.

Lobster has always been considered a luxury item. It is a food for the wealthy who can afford it. In addition, lobster represents gluttony because it is consumed for its flavor and sense of excess. Finally, lobster is a memento mori, or “remember that you will die.” Live lobsters are brown and black. They only turn a vibrant red once they are boiled until dead and cooked. Therefore, this lobster is dead and reminds the viewer that all pleasures must end one day with our own mortality. Pieter de Ring’s lobster ironically and simultaneously represents excess and the end of excess.

Above the lobster is a wicker basket filled with fruit. A split Mediterranean peach sits beside bunches of red and green grapes. Like the lobster, the fruit is depicted with exquisite realism. The peach pit flares with fine fibres while the grape skins shine with delicate highlights. The peach is an import from more Southern European countries. Thus like the lobster, it is a symbol of affluence due to its importation costs.

The grapes may cost less than the peaches, but they have more symbolic meaning. Grapes represent both fertility and salvation. Grapes were associated with the Roman god Bacchus. Bacchus was the god of agriculture, wine, and fertility; but he was also associated with debauchery and drunkenness. These pagan illusions contrast with the Christian meaning of grapes and wine.

Wine has a strong connection to the Christian message of salvation. Jesus Christ performed his first miracle by turning water into wine, and then referenced wine during the Last Supper. Ergo, grapes featured in Pieter de Ring’s Still Life with a Golden Goblet represent the best and worst of life. Sin and salvation are infused within the delicious red and green fruits.

On the table and to the left of the lobster is a small collection of citrus and seafood. A yellow lemon is the central focus while an orange and a crab flank its left, and red cherries and a plate of oysters flank its right. The lemon is partially peeled with its rind overhanging the table’s edge. Its skin is cut into a continuous peel that spirals and just catches the tabletop. The lemon’s composition is not just a flight of fancy but a clever ploy for Pieter de Ring to showcase his artistic expertise.

Only a skilled artist could realistically capture the delicate cascade of lemon peel. It allows Pieter de Ring to illustrate his expert handling of shape and perspective. The lemon also allows the painter to add more symbols to his composition. Lemons, like peaches and lobsters, were symbols of wealth. However, lemons were extremely expensive because they originated from either Spain or Italy. The importation costs caused lemons to become a symbol of conspicuous consumption.

Lemons were the Rolex watches of the Dutch Golden Age. To own a lemon meant you had arrived in society because you had enough disposable income to afford one. Ironically while the lemon represents the positive attributes of luxury, love, fidelity, and longevity; it also represents the negative attributes of sourness and disappointment. Every piece of food featured in Still Life with a Golden Goblet therefore has both positive and negative meanings.

As Still Life with a Golden Goblet conveys, a golden goblet appears in the composition. Gold has always been considered a precious metal in Western society. It has been considered the flesh of the gods by ancient Egyptians, and a cause for desire and corruption for centuries. Gold has been associated with kings and emperors as worthy of crowns and regalia. Therefore, featuring gold within the painting highlights the overall luxury of the banquet scene.

Gold was the most prized metal of the 17th century, and therefore only the extremely affluent could own such a large piece as the golden goblet. It is an opulent piece of Baroque metalworking. It has embossed scrollwork, repoussé relief, and a lustrous glow. To the base of the golden goblet is a Chinese porcelain dish in shades of blue. It sits jauntily on a three-pronged silver stand.

Like many of the objects depicted in Still Life with a Golden Goblet, the Chinese dish is an import and was very expensive. Chinese Ming pottery, like now, was highly praised for its delicacy and virtuosity in the Dutch Republic. Only the truly wealthy could afford an authentic Ming piece. Most Dutch citizens had to make-do with domestic imitations and copies. Hence, the Chinese dish and the golden goblet add to the accumulation of precious objects and luxury goods featured in Still Life with a Golden Goblet.

Pieter de Ring’s Still Life with a Golden Goblet is not a very large painting. It measures 100 cm (39.4 in) high by 85 cm (33.5 in) wide. The fruit, seafood, and tableware are all life-sized. They announce the success and newly acquired status of the prosperous Dutch Republic during the mid-17th century.

The Dutch were justifiably proud of their material accomplishments. Amsterdam had the highest per capita income in Europe. The Netherlands became an economic and financial center through its international banking and trading. Dutch cities like Amsterdam, Haarlem, and Delft became economic powerhouses. Sadly, the Dutch Golden Age ended in 1672, but its legacy continues on the walls of private and public collections throughout the world. Pieter de Ring’s Still Life with a Golden Goblet can be viewed at the Rijksmuseum of Amsterdam, Netherlands.

Notice the ring painted on the image’s right border by the base of the bread. It was Pieter de Ring’s artistic signature as it visually plays upon his last name. If you travel to other museums, look for other opulent banquet scenes. If you find a random ring painted into the scene, you might have discovered an unattributed work by Pieter de Ring! How amazing would that be?