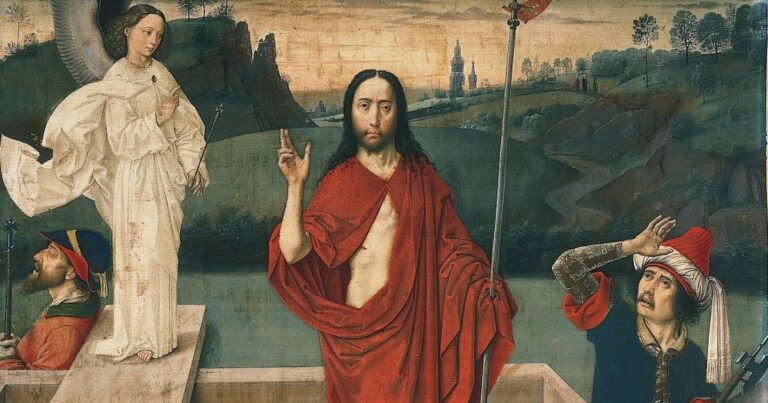 Dieric Bouts was a Northern Renaissance artist, greatly influenced by Jan van Eyck and by Rogier van der Weyden, under whom he may have studied. He is first documented in Leuven in 1457 where he established a school, became the city painter and lived there until his death in 1475. His pictures are highly expressive, well designed and rich in colour, with especially good landscape backgrounds. When he painted The Resurrection in 1455 Bouts was well established in his adopted city. The painting is painted with distemper on linen, an unusual technique called tüchlein which gives the work its matte effect. He used water-based paints, so he was able to apply very thin layers and yet achieve the opacity he desired. Since no primer or ground was used, in some spots the linen shows through where the painting has been abraded, for instance on the angel’s robe. Because of his technique the colors are less brilliant and appear flat. Unfortunately, the pigments that Bouts used have faded over time. The colors originally had more depth and brightness, and as a complete altarpiece it must have been a luminous masterpiece.   [caption id="attachment_11030" align="alignnone" width="842"] 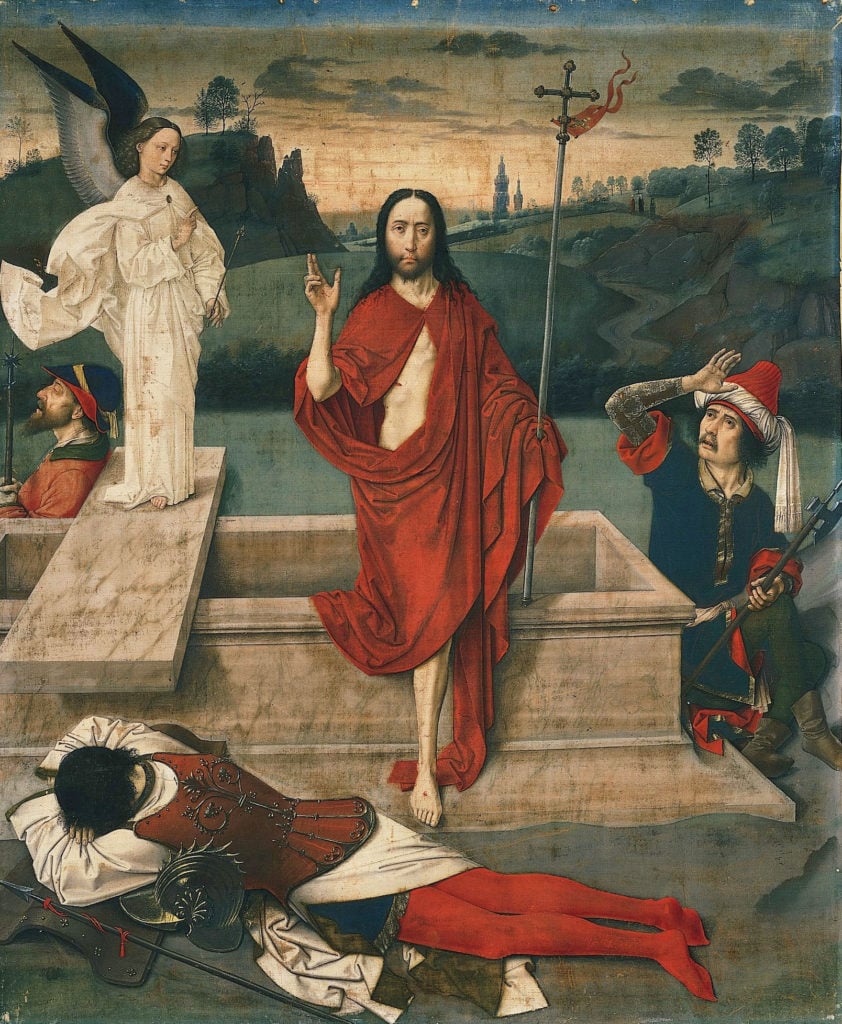 Dieric Bouts, The Resurrection, c. 1455, The Norton Simon Foundation[/caption] On The Resurrection we see a powerful spirituality typical for the 15th century Netherlandish masters. Christ with a very "Bouts-like" face  rises from the tomb, the drama and theatricality of the moment are stilled by his pose and gaze and by the lyrical landscape background. The Resurrection is believed to be one of a polyptych consisting of five sections that are now widely scattered. The Crucifixion from the Musées Royaux des Beaux-Arts in Brussels is the largest painting and would most likely have been the central panel. The left side would have consisted of the Annunciation at the Getty Museum and the Adoration of the Magi now in a private collection in Germany. On the right would be the Entombment from the National Gallery in London, while the Norton Simon Resurrection would be at the bottom right. The linen support makes the sections lightweight so it may have been intended to be a portable altarpiece, but, unfortunately, the patron who commissioned it is unknown. The painting was bought on auction in 1980 by the Norton Simon Museum of Pasadena who outbid Britain's National Gallery, and paid $3.7 million at a London auction. The price was unexpected. It exceeded by a factor of seven the presale estimate of $440,000. And it obliterated the previous auction record - of $35,000 - set in 1973 for a work by Bouts. Neither the National Gallery nor Jennifer Jones, the American actress who was bidding on behalf of the art museum founded by her husband, would leave the field of battle. That competition made Bouts' "Resurrection" the third-most-expensive picture ever sold at auction.