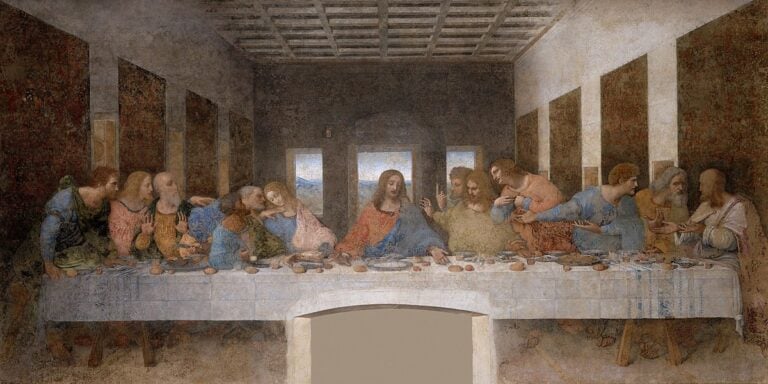 The legendary 15th century painter Leonardo da Vinci has an impressive legacy of artworks. The maestro left behind a huge number of works that played a pivotal role in adding momentum to the Renaissance movement. Get to know 10 important facts about The Last Supper by Leonardo.

Leonardo’s da Vinci’s artworks have always impressed critics and the masses for their subtlety, hidden meanings, and artistic appeal. However, some of his creations have reached cult status – leading to numerous interpretations and leaving a huge impact on the art and culture scene. One such legendary religious artwork by the maestro is The Last Supper.

Nuances of the Last Supper

This mural painting, created in the late 15th-century was completed 3 years after work was started in 1495. Located in Milan’s Convent of Santa Maria delle Grazie, it is hailed as one of the most iconic paintings by da Vinci. The original painting has a dimension of 4.6 meters x 8.8 meters (15 ft x 28.8 ft). The topic is the last meal taken by Jesus and his apostles before he is betrayed by Judas. The painting is in fact a visual interpretation of the event chronicled in the Christian New Testament. It depicts the reaction of the apostles after Christ reveals that one of them is going to betray him.

When Da Vinci started painting the mural, he did not have much expertise. He did a bit of experimentation and pigmentation was done on a dry plaster wall. That is why the painting did not stand the test of time well. Even when it was in progress, problems of flaking appeared. Da Vinci had to face much hassle fixing those issues at that time. Over the years, it underwent a number of restoration efforts. Therefore, very little of the original masterpiece remains now.

2. The painting captures a crucial and climactic moment

It is well known that The Last Supper depicts the last meal of Jesus with his 12 apostles. This event was followed by his capture and crucifixion. However, Da Vinci was keener to capture the reactions of the apostles through the painting when they came to learn of Jesus’ knowledge about a betrayer. The expressions captured on their faces are what makes the painting even more captivating.

Unlike some other paintings by Leonardo da Vinci, The Last Supper cannot be found in any museum. It is kept at a convent in Milan, Italy. Moving it from the wall of the Convent of Santa Maria delle Grazie would be tricky as well.

Contrary to widespread belief, this iconic painting cannot be classified as a fresco. Frescos are not painted on dry plaster. Furthermore, deviating from the usual methods led to deterioration of the work.

5. The painting has undergone many restorations

It is among those famous Christian paintings that underwent several rounds of restoration to survive the test of time. The tempera-on-stone experiment of Da Vinci was not very successful. The paint started decaying and flaking as early as the 16th century. There were several restoration efforts that left little of the original painting intact.

6. The authentic look of the apostles

Viewers cannot help admiring the look of the apostles in the painting. There is a theory that each of these apostles was modeled on real life people. For depicting Judas, Da Vinci reportedly chose a criminal.

7. John may actually be Mary Magdalene

To the right of Jesus in the painting is John the Apostle. However, a section of biblical scholars feels the person depicted in the painting is not actually the apostle John. The figure in the composition is the only one wearing  a pendant or necklace, which suggests that this could be Mary Magdalene in disguise.

8. Judas is depicted as a stereotypical Jew

By analyzing the painting closely, it becomes clear that Da Vinci depicted Judas in a typical way to make him resemble a cliché of a Jew. Judas is the only person among the apostles with dark skin. He has a crooked nose. He is seen drinking milk while others are sipping wine. He is seen with a bag of money as well.

It is well known that Da Vinci used maths and numerological aspects in his works and The Last Supper is no exception. In this painting, number 3 has been depicted in many ways which stands for the Holy Trinity. The apostles are present in groups of 3 and there are 3 windows behind the group. Jesus is positioned as a triangle in the painting as well.

It is not only weather elements that ravaged the painting. In the late 17th century, the painting was damaged by French revolutionary soldiers. Later, in World War II, bombing vibrations damaged the building where the painting is kept.

Vandana Sethi is the Co-founder and Editor of Historyly, a teacher by profession. She has a passion for reading and writing about different historical periods. Historyly was started with the view to make ancient history meaningful and interesting to the everyday reader.