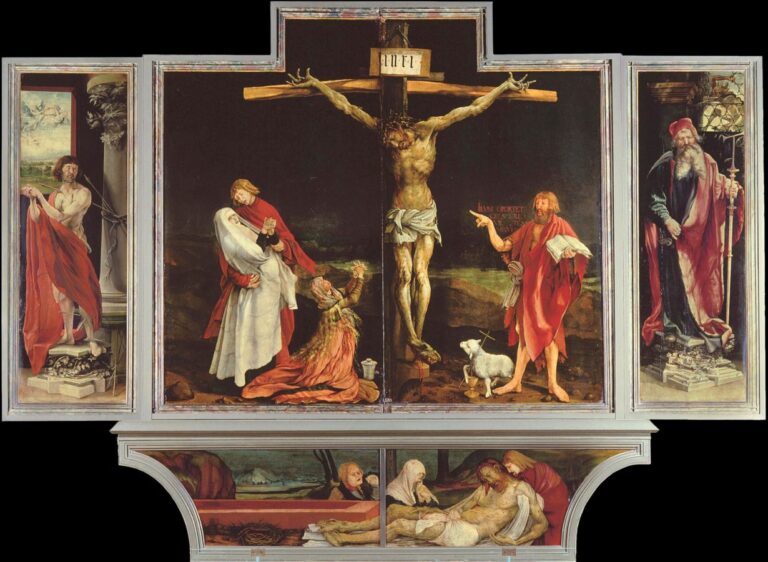 Easter is coming! But before the happy celebration and dancing with bunnies in the garden, Christians go through a Triduum, a three day period including Maundy Thursday, Good Friday, and Holy Saturday which remind of Jesus' passion. Good Friday is a day in which many Christians commemorate the death of Christ, who gave up his own life for the salvation of others, thee subject which is probably one of the most common themes in art history (since the Church was artists' main sponsor and every parish church and even family chapels required at least one representation of the Saviour's passion). Most often the crucifixion was the central piece in the church, placed above the altar, on which the attention of the faithful was focalized. Its main objective was to evoke sadness or remorse, as well as prompt to turn away from sin. Therefore, it had a cathartic function. 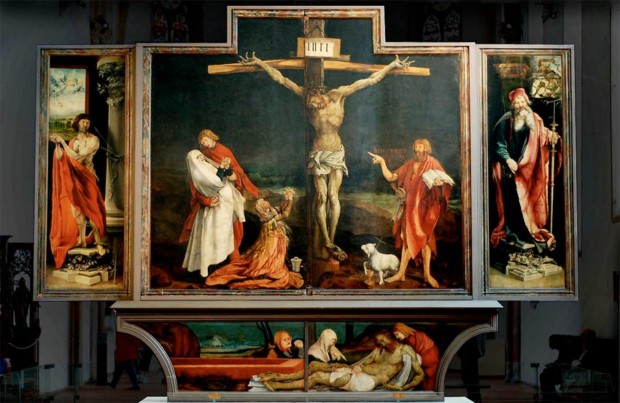 Matthias Grünewald, Isenheim Altarpiece,1510 - 1515[/caption] This altarpiece is a triptych with an additional bottom predella. The left wing represents St. Sebastian, who was a martyr, the right one St. Anthony, while the predella works as a flash forward to the central scene of crucifixion as it shows the Entombment of Christ. This is one of the most gruesome pieces I know: Jesus' body is contorted in pain, look at his hands!, the colour of his skin has become a cadaverous green. His mother is swooning from emotional breakdown in the arms of Jesus' favourite disciple John. The lady by the feet of the cross is Mary Magdalene, while the other man is a symbolic figure of John the Baptist, the first man who preached Jesus' arrival as a saviour.

Rogier van der Weyden, Crucifixion Diptych, c. 1460, Philadelphia Museum of Art[/caption] Van der Weyden was a true master of crucifixions, depositions and other sad scenes. Look at Jesus' body: it's skin and bones, whose eerie green colour is emphasized by the red cloth behind. The cloths refer to the usual practice in churches, where the red or golden cloths were hung behind sculptures of saints in order to highlight their importance, so that nobody would miss their presence. Also here, our eyes are straightaway peeled to the figures of swooning Mary and dying Jesus, and the austerity of the place is heightened by the stark colour contrast between the complimentary green and the grey and black. Antonello da Messina, Crucifixion, 1454-1455, Royal Museum of Fine Arts of Antwerp[/caption] I think that this painting is more gruesome for the figures of two thieves who were crucifies by Jesus' side. Their contorted bodies give us straightaway the idea of immeasurable pain they experience, and the curves of the tree branches they are crucified on, parallel their contortions and thus reinforce the visual effect, which is heightened even more by the contrasting peaceful landscape in the background. 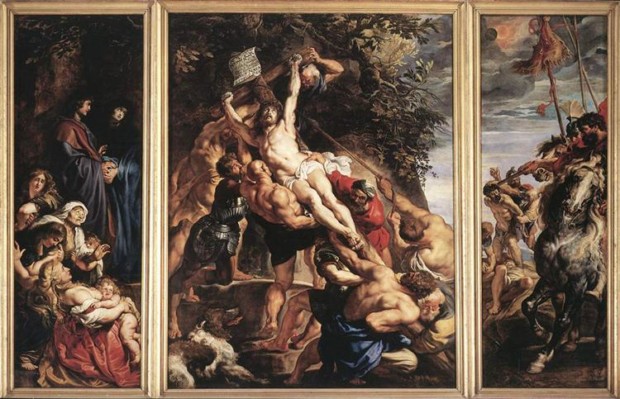 Peter Paul Rubens, The Elevation Of The Cross, Antwerp, 1610[/caption] Here comes another triptych, this time by Rubens, who having completed a journey in Italy came back to Antwerp and painted this piece, together with the second part, the Descent from the Cross, for the Cathedral of Our Lady in Antwerp. I want you to see it although it does not look gruesome or terrifying: Jesus' body is clean and does not bear any signs of tortures he has just been through, no pain on his face. Instead we get many muscles and first of all movement, which was Rubens' main objective. This work is emblematic for the Baroque love of dynamism and exaltation, and for it deserves a place for its heroism.