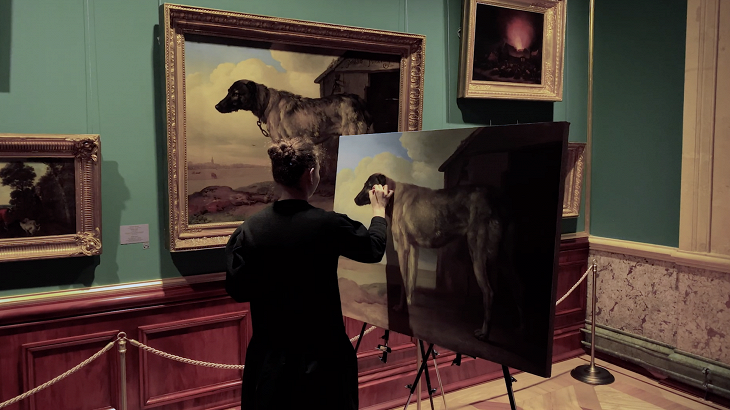 The Apple company recently presented a film that was shot within the State Hermitage Museum in Saint-Petersburg. It shows 45 halls and 600 works of art. And you can see the best moments of Apple’s Hermitage museum Journey here!

Aksinya Gog, director of the movie, calls it “a meditation”. This film is an attempt to capture one day in the life of the museum. It can certainly be seen, the Hermitage itself is a special character, the protagonist of a journey, who is living its own life. The movie combines the latest technology and art that exists outside of time.

However, you don’t need to watch the whole movie at once. It consists of completely self-contained pieces. So you can immerse yourself in it at any moment and break away from the world’s fuss and anxiety with many parts of this meditative beauty.

The film was shot in one continuous take on a single charge of the iPhone 11 Pro Max. It lasts 5 hours and 19 minutes. Before the Apple movie, there was only one feature film with the Hermitage’s treasures. In 2002, Aleksandr Sokurov shot the film Russian Ark; also done in one take.

Preparation for the shooting took about four months. During that time, the production team wandered about the halls among visitors, mapping out the perfect route. The filming itself took place on Monday, the Museum’s day off. However, even on this day, thousands of employees are busy cleaning, checking inventory, and restoring everything within. Therefore, the crew only had six hours to film the five-hour movie: no mistakes allowed!

Let’s dive in to some of the Collection’s Highlights!

Welcome to Hieronymus Bosch’s world at 1:08:26! Sadly, there are no original Bosch’s works in the Hermitage but there is the masterpiece The Garden of Earthly Delights painted by one of his followers. It became public in 2016 after a restoration.

Bosch created his triptych, an paneled relief often used as an altarpiece, at the beginning of the 16th century. The original is in the Prado National Museum in Madrid. The Hermitage’s rendition entered the museum in 1922 and is much smaller than the original. For this purpose, the artist, in order not to overload the composition, reduced the number of figures in the upper part of the picture.

Frans Hals’ Portrait of a Young Man Holding a Glove

At 1:32:36 we see the fascinating picture of this young artist studying and recreating Frans Hals’ Portrait of a Young Man Holding a Glove (1650). Frans Hals was one of the most brilliant portrait painters of the mid 17th century. He was not interested in the subject’s solemn pose, full dress, and social position. Above all, he was interested in a man’s feelings and emotions and all his natural essence and character. Hals conveyed all shades of facial expressions with the immediacy of instant photography. So it seems that if we turn around, here he is: a young man with a glove, posing, very close to us.

At 1:55:00, we are welcomed to Rembrandt’s Kingdom within the Hermitage. The museum is quite rich with this master’s paintings. It contains such masterpieces as Flora (1634), a portrait of Rembrandt’s first wife Saskia as the goddess, Danaë (1640s) (here you can read all about their love story), The Return of the Prodigal Son (1661-1669) and more. Also, if you want to see some of Rembrandt’s etchings and engravings, the State Hermitage is a great place for it (the Apple movie does not show them).

Among Rembrandt’s works, we find many self-portraits, as well as images of his mother and Saskia. Rembrandt concentrated all the power of light on the faces, plunging everything else into darkness. Therefore, the viewer pays attention to the face, and not to details and surroundings. In conclusion, people appear before the viewer’s eyes with all their flaws and virtues. Certainly, Rembrandt changed the general view of the role of light and shadow in paintings. That is to say, the study of his work will never be completed. It is impossible to put an end to the study of genius.

Judith by Giorgione (1504), his only painting located in Russia, can be seen at 2:29:21. This biblical image of the heroine who saved the hometown Bethulia from the invasion of the Assyrians was one of the most popular in the Renaissance. But Judith is different in Giorgione’s eyes – she is calm and tender, not firm and resolute, contrary to how she often is portrayed. The image of a young woman echoes with the soft clarity of a peaceful nature. At the same time, the cold cutting blade of the sword and the unexpected cruelty of the motive brings a feeling of anxiety to this seemingly harmonious, almost idyllic mood.

Another great Renaissance painter, Titian, finished some of Giorgione’s works after his death. And in this regard, the Hermitage also has something to offer! Look at the Penitent Magdalene (1565) at 2:41:20. It was believed that to be captured by Titian’s brush meant to become immortal. You can look through the Hermitage collection of his paintings and see for yourself!

Another diamond of the collection, The Lute Player (1596) by Caravaggio, waits for you at the 3:56:00. It is the only painting of the famous Italian in Russia. He used an amazing technique “Alla prima” – which means painted without the preliminary drawing! Caravaggio’s reputation was infamously unfavorable. Despite this, the renown of his paintings, on account of their amazing beauty, rivaled his own poor one. And, you can read more about Caravaggio’s paintings related to music here.

And there are many more treasures in the museum’s collection!

You can find the movie on Youtube with free access. There is also a soundtrack playlist at Apple Music.

Want to dive in to more art while safely remaining at home?