Art Timeline: Paintings Inspired by Themes of the Film Orlando 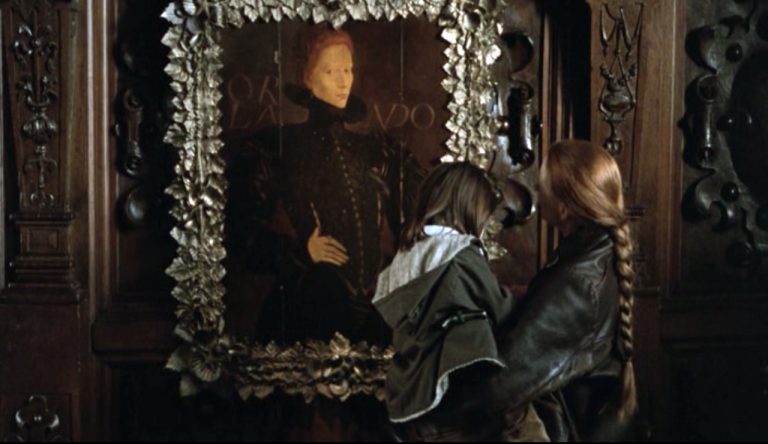 Orlando (1992) is a British period drama based on the Virginia Woolf novel of the same name and is directed by Sally Potter. Orlando, played by British actress Tilda Swinton, is an English nobleman who lives for four hundred years. In the early years his life, he lives in a male body and the rest of the time in a female’s. His life story covers a large historical period – from the 1600s to the 1920s. Orlando observes the changes of society and, moreover, as he moves through time, he changes his attitude on seven global philosophical terms – death, love, poetry, politics, society, sex, and birth. Let’s go through the Art Timeline of the film Orlando and paintings inspired by it!

Interestingly, the first point on our Art Timeline is an image of death. But what an incredible story Caravaggio depicted on canvas with Judith Beheading Holofernes!

The story of this painting began with desire… The desire of a young Roman courtesan, Fillide Melandroni, to do something heroic on canvas. Painter Caravaggio offered to depict her as the widow Judith, who saved her city of Bethulia from an Assyrian army led by the general Holofernes. Did you know that Caravaggio posed as Holofernes himself? This was not to predict own death, but the reason was simple – the artist did not have enough money to hire a male model.

There are plenty of paintings of Judith, but let us explain what makes Caravaggio’s Judith Beheading Holofernes so special.

First of all, artists usually depicted Judith after the murder, holding Holofernes’ head in her hands. Typically, Judith is tranquil with a blithe smile, her figure is extremely feminine and exquisite. Obviously, Caravaggio’s Judith is completely different! She looks like a peasant girl with a childish face, her blushed cheeks and frown express disgust, but her strong arm holds the sword tightly. And take a look at Holofernes, his expression of horror in face of death, so that in this painting you clearly see him as a victim.

Flemish painter Peter Paul Rubens made lots of mythological and allegorical paintings during his life. The canvas Venus and Adonis became a pearl of Catherine the Great’s collection at The State Hermitage Museum in St. Petersburg, Russia.

The original legend tells the love story of Venus, the Roman goddess of love and beauty, and Adonis, a mortal hunter. Mars, the god of war and Venus’ husband, wanted to punish the mortal lover while Adonis was out hunting. Learning about the plan for revenge, Venus and her son, Amour, tried to prevent Adonis from going hunting. Unfortunately, the hunter disagreed with the goddess.

By all accounts, Rubens was a master of painting nudes. Male figures in his artworks are muscular and females had voluminous and fertile bodies. He believed that a body with voluminous flesh, with its creases, bulges, and curves, looks more interesting in paintings. Rubens knew how to paint realistically, adding delicate details to the humans body using blue, red, white, and brown colors.

You can see Venus looking straight into Adonis’ eyes, begging him to stay safe. Neglecting her anxiety, Adonis’ gaze is tranquil; he is brave and fearless in the face of danger. Additionally, there are swans behind the lovers as a symbol of loyalty. After Adonis’ death, Venus suffered for a long time.

The next point in the Art Timeline is poetry. The 17th century gave birth to the Classicism style, mainly in France. Classicism is an aesthetic based on the tastes and culture attributed to ancient Greece and Rome.

The Inspiration of the Poet by Nicolas Poussin reflected the impact of antique mythology on 17th-century Art. The central figure is Apollo, the Roman god of archery and art, being crowned with a laurel wreath. He inspires the poet to write. The young poet on the right is probably Virgil.

The figure standing on the left is Calliope, the muse of epic poetry. Additionally, the golden light shows the influence of the great Venetian painters of the 16th century. Apparently, the appearance of the muse Calliope has led to the suggestion that the picture was painted in honor of a recently dead poet.

1700s. Politics on the Art Timeline

The beginning of the 18th century was a key point in European politics because of the appearance of the Russian Empire. In 1697-1698 the Russian Tsar, Peter I of Russia, made a big journey around Europe to learn how to build a navy and to master other professions.

Previously, Tsar Peter made acquaintance with Franz Lefort and Patrick Gordon, who had a huge impact on Peter’s outlook. From his late teens, the young sovereign visited Kukuy Quarter, where his European friends lived and taught him about their culture. As a result, Peter was thrilled to turn Russia into a powerful empire on the Baltic Sea.

To built a new empire, the Russian Tsar decided to see European life with his own eyes and enlisted the support of European monarchs such as Frederick I of Prussia, William III of England, Leopold I of Holy Roman Empire, and Augustus II The Strong of Saxony.

1750s. Society on the Art Timeline

In the 18th century, portraits were means to depict the occupation and wealth of the person being portrayed. The English artist Thomas Gainsborough made lots of remarkable portraits of British nobles. In fact, Gainsborough hated to paint standard, boring portraits, so he decided to make something really rebellious. Portrait of Ann Ford was a challenge for 18th-century society!

You may wonder, what could be scandalous about this portrait? Well, let’s plunge into 18th-century morals.

First of all, the lady in the portrait was Ann Ford, a famous English singer and musician, but artsy women at the time were considered to be a kind of prostitute. Also, pay attention to her relaxed pose. She crossed her legs, sitting like a man. Ann holds an English guitar tenderly, even intimately. Overall, she copied a sculpture of Handel and consequently compared herself with an outstanding composer!

The next point on our Art Timeline is middle of the 19th century. Courtesans were the most popular women in Paris. The French courtesan Marie Duplessis inspired French writers, poets, and musicians. For instance, the French writer Alexandre Dumas fils and the Hungarian composer Franz Liszt were her lovers. So that is why we see numerous portraits of courtesans depicted as goddesses, romantic nymphs, etc.

However, Manet’s Olympia is neither goddess or nymph. Manet showed an ordinary scene from a Parisian prostitute’s life, deprived of romantic and mythological background. Moreover, her face and figure didn’t meet the requirements of women’s beauty in the 19th century. Read the following review from a critic named Ego:

A courtesan with dirty hands and wrinkled legs lies dressed in a Turkish shoe and a colorful cockade in her hair; her eyes, green eyes, bloodshot, seems to defy the public under the protection of an ugly black woman…has the livid tint of a cadaver displayed at the morgue.

A critic named Ego. Griselda Pollock. Differencing the Canon: Feminism and the Writing of Art’s Histories.

And the last point on the Art Timeline is The Birth of Venus by the French painter Odilon Redon. Redon’s artworks are divided into two groups: “black period” and “colored period.” The artist explained changes in his artwork this way:

If an artist’s creativity is a song of his life, in addition to sad black and white notes, at least distinct colorful notes of joy should sound in it.

A beautiful example of his “colored period” is The Birth of Venus. The goddess of love emerges from a seashell, sharing water’s associations with creation and procreation. Interestingly, the shape of the shell reminds one of female genitalia, representing it as an emblem of felicity and prosperity.

Furthermore, Redon’s rendering of the shell’s elliptical silhouette and luminous shades creates a nimbus-like effect similar to the religious icons of the Virgin Mary or the Christ. Like the early Christian almond-shaped aureole, Redon’s seashell is a maternal womb, life, and utterly sacred.