Our Dad Is an Artist: Thomas Gainsborough’s Daughters 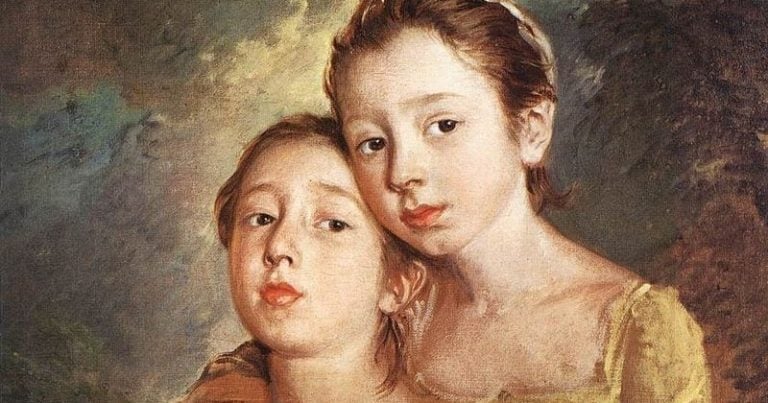 British portrait and landscape painter Thomas Gainsborough was born on this day in 1727. Happy Birthday! To celebrate, let’s talk about his daughters Mary and Margaret who were very important to him. The artist portrayed them in many of his paintings. Read their story.

There are many cases in art history of artists training their daughters to be successful painters. In fact, many of the historical female artists we talk about here and on the DailyArt app got into the profession through their fathers. Thomas Gainsborough really wanted to be one of those artist fathers. He hoped that his daughters would become landscape painters since this was his favorite genre. Sadly, it wasn’t meant to be. Neither of Gainsborough’s daughters were at all interested in pursuing artistic careers.

Even though they decided to not become artists themselves, Gainsborough’s daughters still have a place in art history, as their father’s favorite models. Gainsborough painted Mary and Margaret many times throughout their life. This shows how much he cared about them, since it’s well known that he much preferred to paint landscapes when he wasn’t working on commissions.

The first known painting of Gainsborough’s daughters is this lovely scene of the girls (about ages three and five) chasing a butterfly. Some people have interpreted this painting as an allegory. It might refer to the innocence of childhood, or, by contrast, to the dangers of being frivolous. It’s hard to be sure.

A few years later, we see the girls hugging each other and holding a cat. Only the girls’ faces are fully realized. The rest is sketch-like, so the cat is difficult to see. Gainsborough enjoyed painting animals, so that’s probably why we see his girls with so many different creatures. Even as adults, he once showed them with a dog.

Once you’ve seen Gainsborough’s daughters a few times, they’re easy to recognize. If you take a look at his self-portrait, you’ll see the family resemblance.

In the painting below, Mary and Margaret sit with sketchbooks in front of a statue. It seems that they learned at least a few drawing skills before losing their interest. Unlike in all the works we’ve seen so far, they have not dressed alike here. We might assume that they began to show their individuality more as they got older, or at least that their father started noticing them more like two separate individuals as they grew up. However, they were twinning once again when their father painted their portrait about seven years later.

In case you’re wondering, the closeness between the girls implied by these portraits isn’t just a dad’s wishful thinking (like their potential painting careers were). Mary and Margaret Gainsborough were genuinely very close throughout their entire lives. Excepting during Mary’s brief and unhappy marriage, they always lived together. And their individual portraits are still together at the Tate in London.

In case you’re not familiar with the birthday boy, Thomas Gainsborough was a popular and influential British painter of the 18th century. He is best known for his fashionable portraits of British aristocrats and nobility, like the Blue Boy and the Duchess of Devonshire. However, his heart was truly in landscapes. He painted many beautiful scenes of the British countryside, which were inspirations to several later generations of landscape painters. Today, Gainsborough is appreciated for his contributions to both genres.