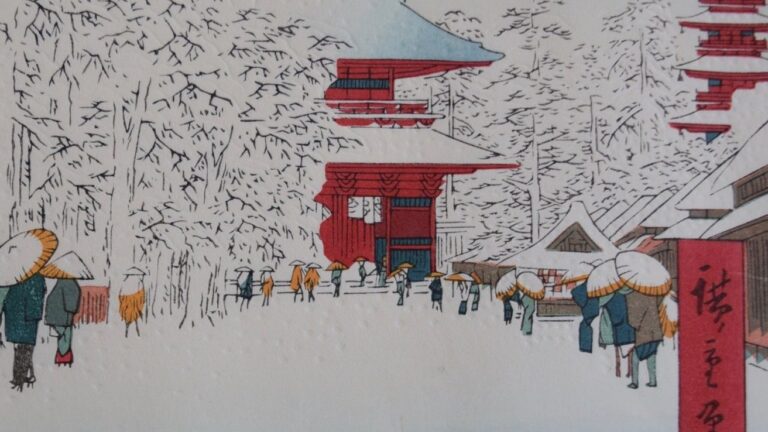 One of the most famous woodblock printers of the late Edo period in Japan, Utagawa Hiroshige, produced a series of a hundred views showing Edo city (today’s Tokyo) from unusual viewing angles, which revealed the hidden beauty of everyday situations and places.

The winter group of the series, numbered from 99 up to 118, begins with the Kinryūzan Temple at Akasaka dedicated to the Buddhist deity Kannon in Asakusa, the oldest and most venerable Buddhist temple in Edo. The season results clear from the skillfully rendered snow, look at individual snowflakes drifting through the sky, while on the roof of the titular temple, heaps of snow are added for visual effect.

The Japanese have mastered mindfulness way earlier than the Occidentals found a name for it. Admiring nature and its spiritual and calming qualities, they have names for natural phenomena which the Occidentals cannot conceive (like a word describing light filtered through the tree leaves…). Nature has always offered an opportunity for the leisure activity of ‘admiring’: in spring they have sakura, the cherry blossom, in winter there is snow. The winter admiring activity usually involved additional wine drinking.

I came out, and looked after—
to see the hemp-white of Mount Fuji’s lofty peak
under a flurry of snow.

In the woodblock print above we can see Mount Fuji surrounded by snow, looking down at the bay, and boats peacefully sailing to their destinations.

The theme of cold weather and the melancholy that it brings was possibly the most diffused in the series.

Another motif associated with winter often found in the woodblock prints is the crane, a symbol of longevity, celebrated in the annual crane hunt of the shogun.

Winter would officially end with the celebrations of the coming of the new year, signified by the auspicious ringing of Buddhist temple bells and festivities filling the air with light.