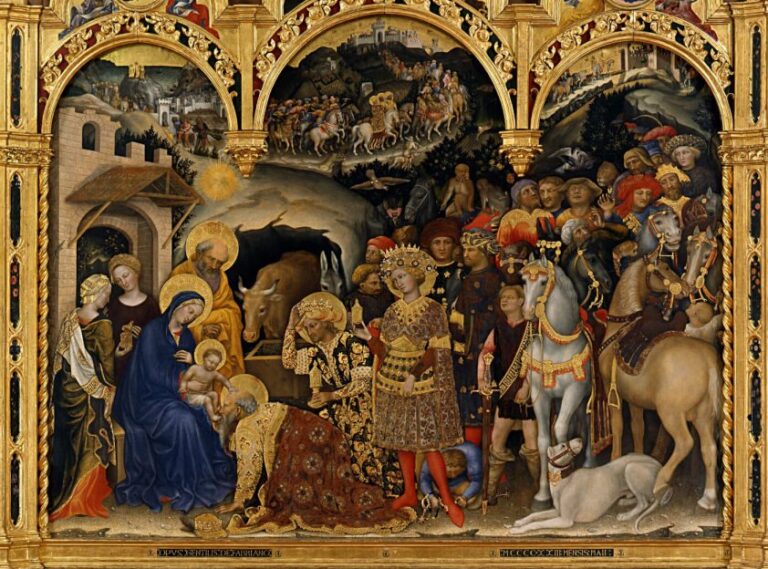 Masterpiece Story: Annunciation and Adoration of the Magi by Fra Angelico

Let’s explore this beautiful altarpiece which features scenes of great pomp and circumstance. Let us venture into the brilliant world of the International Gothic. Let us experience a 15th-century Christmas with Gentile da Fabriano’s Adoration of the Magi.

International Gothic was the dominant European artistic style of the late 14th and early 15th centuries. It appealed to the aristocratic taste in particular, as a result of its use of brilliant colors, lavish costumes, and intricate decoration. Adoration of the Magi gives us a wonderful illustration of this. Undoubtedly it is the epitome of the International Gothic style. The work is an altarpiece which has a very vibrant appearance and gilded frame. The artist was Gentile da Fabriano. He painted the work in 1423 for the family chapel of his patron, Palla Strozzi, that is the Cappella Strozzi, which lies within the Basilica di Santa Trinità in Florence.

Gentile da Fabriano was a fashionable leader of the International Gothic at this time. Similarly, Palla Strozzi was very fashionable in his tastes. Moreover, as the richest banker and the wealthiest Florentine of his time he could afford to be. Look at the elegant shapes, the radiant colours, and the flowing lines throughout the work. Furthermore, its elaborate and gilded Gothic frame highlights the lavish taste that both artist and patron shared. In short, Adoration of the Magi is anything but simple and understated.

At the top of the work we find three spires. Each contains a tondo or circular painting. In the central, largest tondo is an image of God. God is the supreme being in the Christian faith and rules over all the events happening below. In the left tondo we see the Archangel Gabriel, facing to the right. He carries God’s divine message in his hand, here shown in the form of a long written scroll. The message is that the Virgin Mary will miraculously conceive and become the mother of Jesus, son of God. In the far right tondo sits the Virgin Mary draped in blue with her arms crossed. She awaits the Archangel Gabriel bringing the divine message. The Annunciation is about to begin.

The Journey of the Magi

Below the three tondi are three semicircles of canvas framed in elaborate wooden molding. These three spaces depict the journey of the three kings or magi following the Annunciation. The left semicircle shows the magi clad in gold, standing on a rock and observing the Star of Bethlehem. The central semicircle shows them visiting King Herod’s palace, escorted by a large entourage. The right and final semicircle sees them returning home. It is clear that the Adoration of the Magi does not represent one single moment. Instead, it depicts many moments spread over months and then combines them into the complete narrative of the Christmas story.

The Adoration of the Magi

Below the spires, tondi, and semicircles is the dominant and most impressive scene of the altarpiece. Here we see the namesake of the overall work. The three magi present their gifts of gold, frankincense, and myrrh. Gold represents the Son of God’s sovereignty. Frankincense represents his divinity. Finally, myrrh represents his death.

Like their gifts, the three magi are shown as symbols of the three ages of mankind and represent the world. The king on the right is smooth-faced and young. The central king has light facial hair and is middle-aged. The king on the left is bearded, bald and elderly. But, signifcantly, they approach Jesus not as kings but as servants. They are bowing to the recognized ruler of heaven and earth. For this small, haloed child is the reason for this altarpiece. Baby Jesus sits in his mother’s blue lap, simply clad in a white loin cloth. His stature is small but his manner is mature. He places his left hand on the old king’s head in a simple act of benediction or blessing. The three magi will later become saints in the Christian religion.

In addition to the three magi and the Holy Family, a huge crowd of followers and onlookers fill the right half of the panel. Horses with gilt bits and reins stand and prance in place. Simultaneously, exotic animals like monkeys and cheetahs mingle with the crowd. Together, they form a splendid procession. This emphasizes the exotic origins of the three kings and their entourage. Moreover, they provide us with the full rainbow spectrum of colours. There are also highlights of embossed gold leaf which we see on the many spurs, halos, and sword hilts.

The overall composition of the work combines the splendour of Gothic detail with the realism of natural perspective. Some of the animals, like the horses in the foreground, are shown from varying angles. Others are foreshortened to give the illusion of depth. A man on the ground near the youngest magi is foreshortened as he removes the gilt spurs from his master’s feet. These realistic features allude to the naturalism and linear perspective that will soon dominate the later Italian Renaissance.

Below the Adoration of the Magi is a thin dividing panel of wood inlaid with two black panels. They are inscribed in a capitalized Latin font. These gilt letters proudly proclaim “OPUS GENTILIS DE FABRIANO” and “MCCCCXXIII MENSIS MAII”. This translates as “Work by Gentile da Fabriano. 1423 Month of May.” Clearly Gentile da Fabriano wanted everyone in perpetuity to know when Adoration of the Magi was created and by whom.

Below the inscription is the last and final panel of scenes known as the predella. A predella is a panel below the main scene of an altar. Typically it will contain smaller scenes related to the main central image. In the predella of the Adoration of the Magi we see three miniatures. The left miniature depicts the Nativity, the moment when Jesus is born in his humble manger. This has taken place before the magi arrive. Gentile da Fabriano’s Nativity then shows the Holy Family at night. This is possibly the first night time Nativity in art history. The scene is illuminated by the glow coming from the Baby Jesus as he lays on the ground, adored by the praying and kneeling Virgin Mary.

The Flight into Egypt & the Presentation of Jesus

The middle predella image shows the Holy Family’s Flight into Egypt. Mother and Child ride a donkey as Joseph leads his family to safety. The right predella image is the Presentation of Jesus in the Temple. This marks Jesus’ official induction into Judaism, forty days after his birth. Interestingly, Gentile da Fabriano uses modern 15th century architecture for the Biblical temple. But ironically, this “modern” scene is a 20th century copy. The original 15th century panel is displayed separately in the Musée du Louvre, Paris.

Gentile da Fabriano painted the Adoration of the Magi in 1423. Do you think he would believe that society would value and appreciate his work almost 600 years later? For 597 years the work has beautifully shown us the scenes surrounding the early Life of Christ and the story of Christmas. The Adoration of the Magi is not just an International Gothic painting. It is an international Christmas painting too.