Let It Be: The Annunciation In Medieval And Renaissance Christian Art

Religious themes in art have prevailed throughout time. Whether it is Catholicism, Judaism, Islam, or Hinduism - being able to visually interact (through images or text) with the religious messages is an important aspect to many religious followers around the globe, and throughout history. Furthermore, The Annunciation in Medieval and Renaissance Christian art is evident of this idea.

Art and the Church:

The early artistic movements centered around the Church: This was for many reasons; but, to speak simply, it was partly because the church had pockets deep enough to fund this, therefore being in control of creating the narrative. (Once art became more available to the public outside of the church walls and humanism began to grow, religious themes were slowly mixed with secular art). The visual narrative helped the church to bring in non-believers and followers, alike, who may not have had access to the Biblical texts or even knew how to read Latin. (More people meant more money for the Catholic Church because they could collect money from selling "indulgences," a way for the people to pay their way out of their sins). [caption id="attachment_15276" align="aligncenter" width="415"] 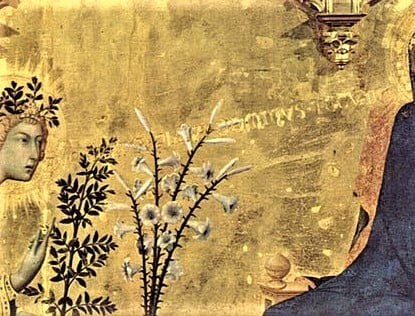 Simone Martini, detail of text in the Annunciation with St. Margaret and St. Ansanus, 1333, Uffizi Gallery, Florence, Italy[/caption] Religiously themed artworks - ranging from Dürer's engravings of Adam and Eve, to Medieval representations of David or Christ on mosaics and tomb walls, to Giotto's Biblical narrative (one of my personal favorites!) in the Scrovegni Chapel - physically represent the array of Biblical figures and allow us to possibly connect, spiritually, to a higher being. [caption id="attachment_15265" align="aligncenter" width="708"] 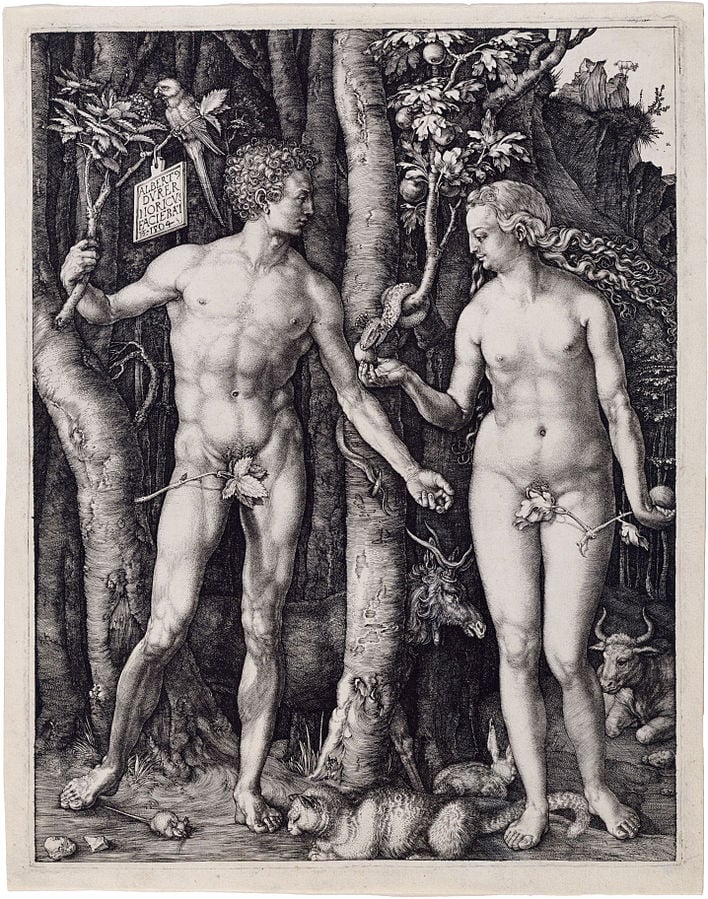 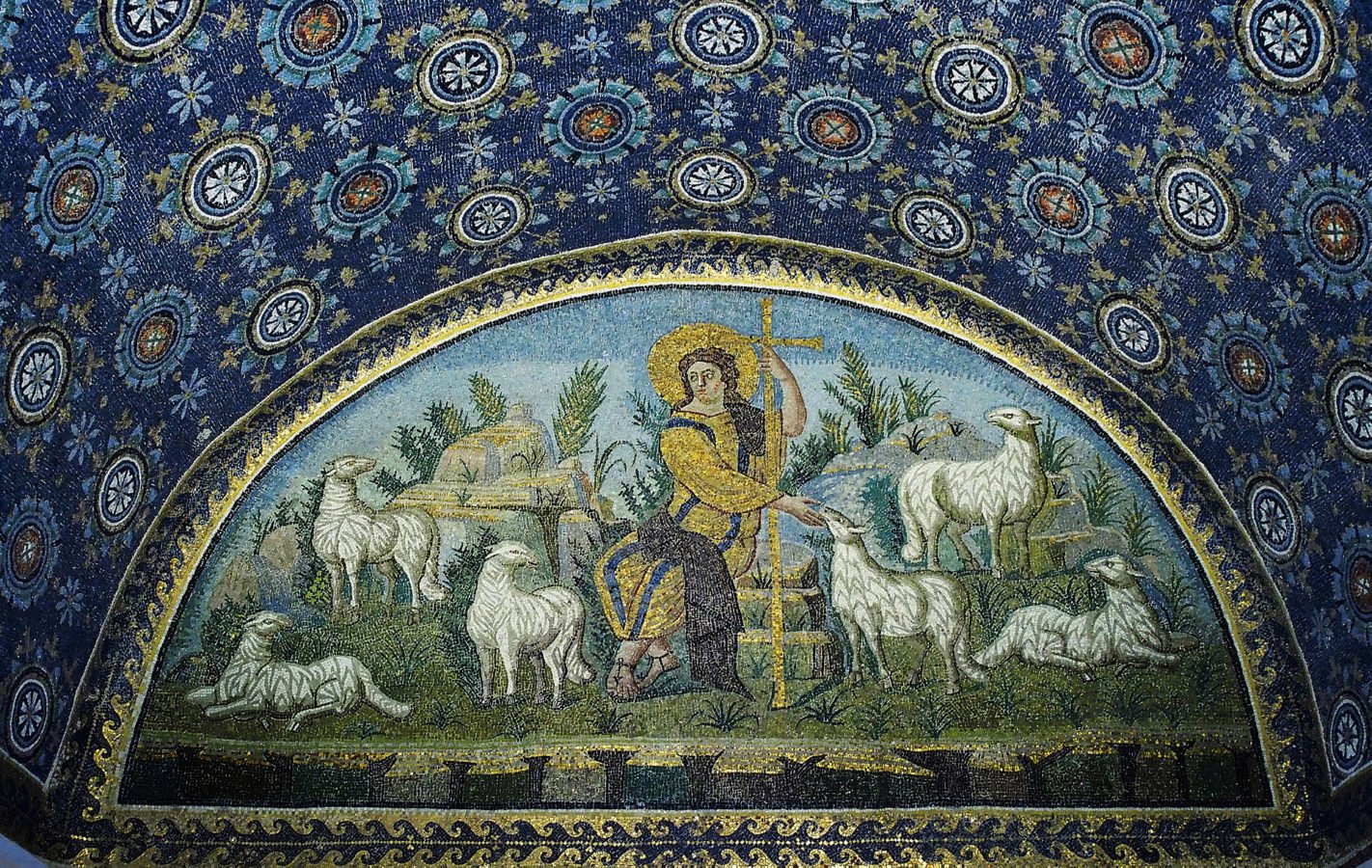 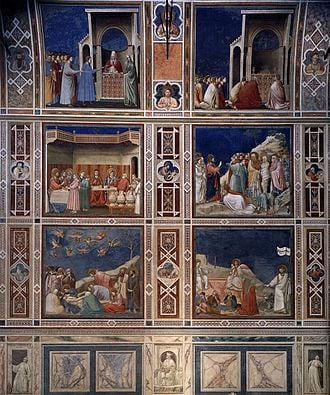 The Annunciation in Medieval and Renaissance Christian Art:

Besides the use of Biblical or religious figures, theology also came into play with Medieval and Renaissance artworks. Quite possibly one of the most popular themes of the 5th-17th centuries, short of Christ Himself, is The Annunciation. In Biblical scriptures, the angel Gabriel comes to Mary to tell her that she will have a son, Jesus...something which she only briefly questions before going along with God's plans for her life. Within this theme, artists utilized artistic liberty – triptychs, sculptures, and single-frame narratives are all available for our viewing from this period of time. While they all appear rather similar, each artist's approach and technique brings something unique out in each one. This version of The Annunciation is beautiful, is it not? Martini's use of the color gold across the entire piece is perhaps meant to make the audience think of light, purity, and even hope....all three of which are symbolized in The Annunciation. Even Gabriel and Mary's nimbus, or halo, shine with a mystical quality. [caption id="attachment_15271" align="aligncenter" width="855"] 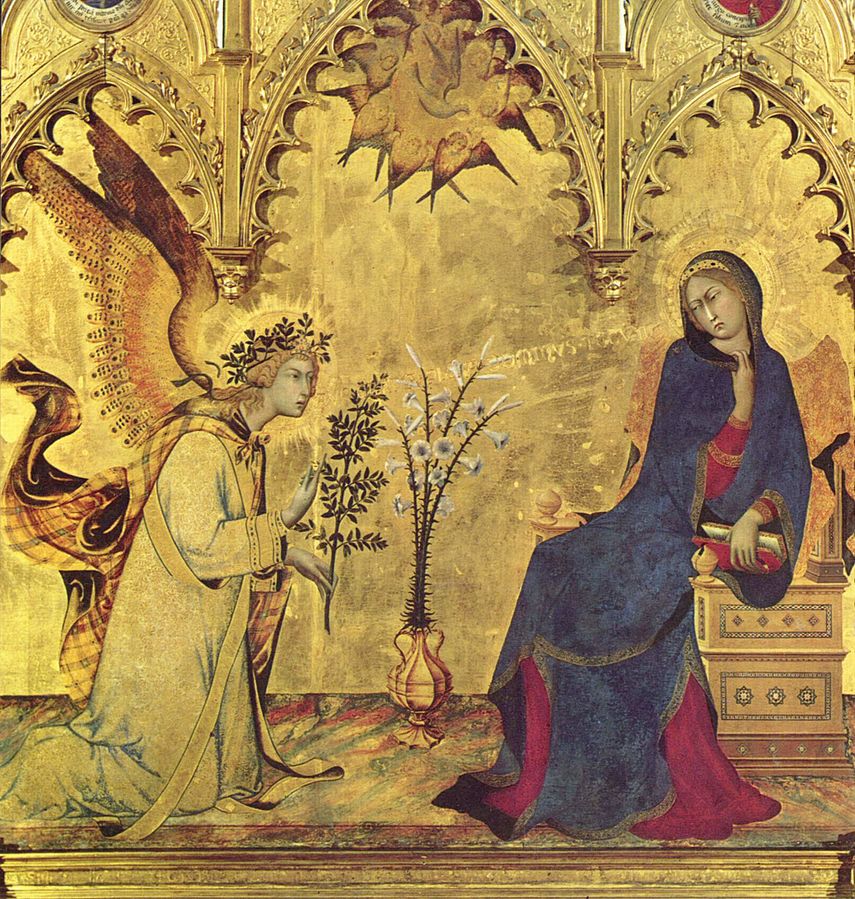 Simone Martini, segment of Annunciation with St. Margaret and St. Ansanus, 1333, Uffizi Gallery, Florence, Italy[/caption] As the years' progress, there is a noticeable shift away from this extravagant use of gold yet maintaining the nimbus, which changes shape and levels of translucence. [caption id="attachment_15272" align="aligncenter" width="1063"] 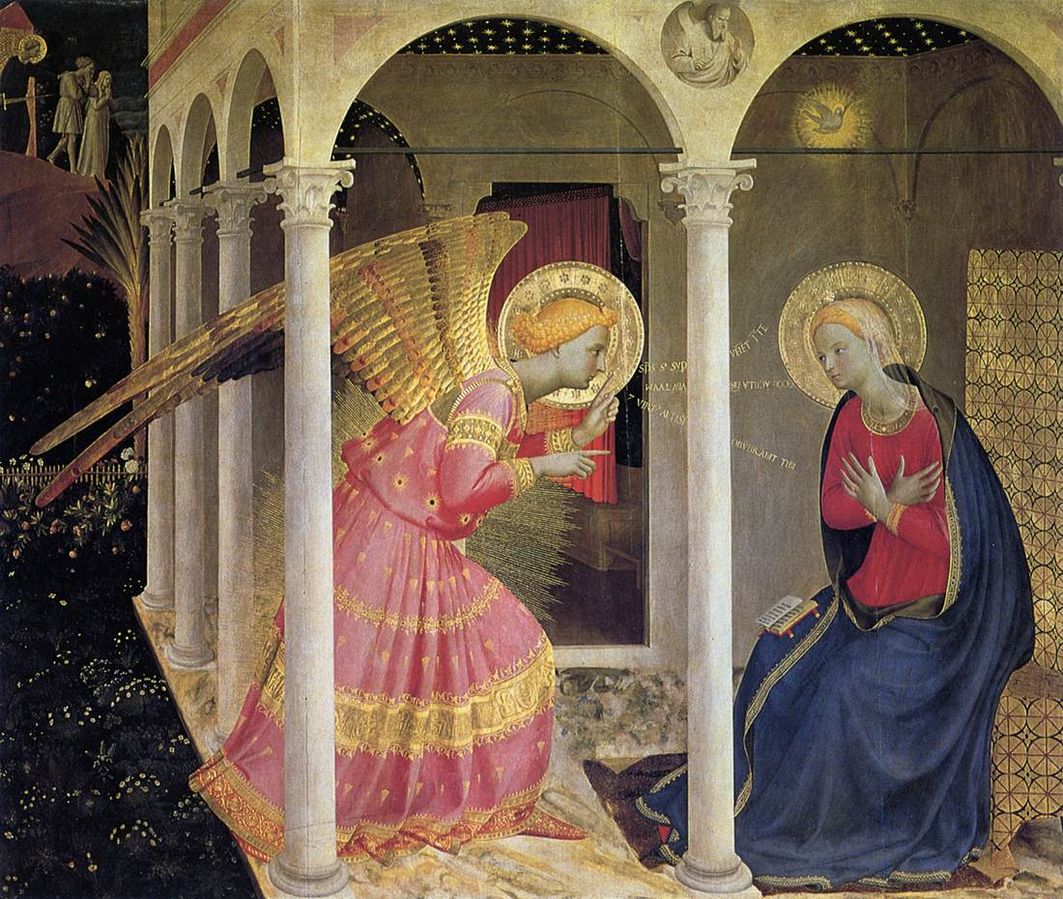 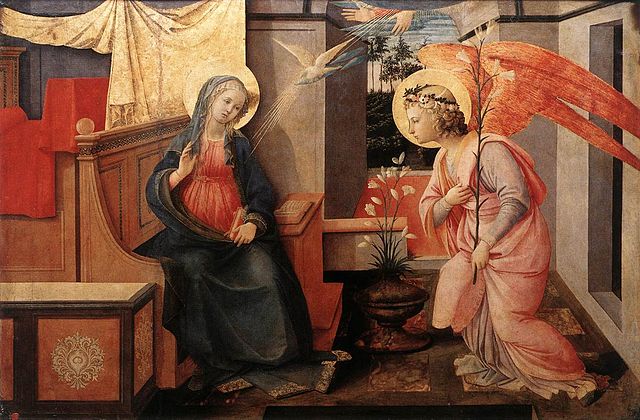 Leonardo Da Vinci, The Annunciation, 1474, The Uffizi Gallery, Florence, Italy[/caption] The nimbus becomes more ethereal, as opposed to the obvious disks above the heads of religious figures, such as saints, angels, and Christ. [caption id="attachment_15362" align="aligncenter" width="591"]

What is it that draws us to this theme?

Is it the mysticality surrounding Christ’s birth? The innocence of the angel Gabriel in juxtaposition to a young unwed, virgin mother? The simplicity of the scene(s)? The use of the color gold? Whatever it is, it has enthralled artists and art historians alike for almost 10 centuries, myself included. And although modern artists have succeeded in translating this theme into modern times, as seen below, the Medieval and Renaissance artists are still holding it down with some of the most amazing and beautiful representations of a religious text. [caption id="attachment_15382" align="aligncenter" width="1000"] 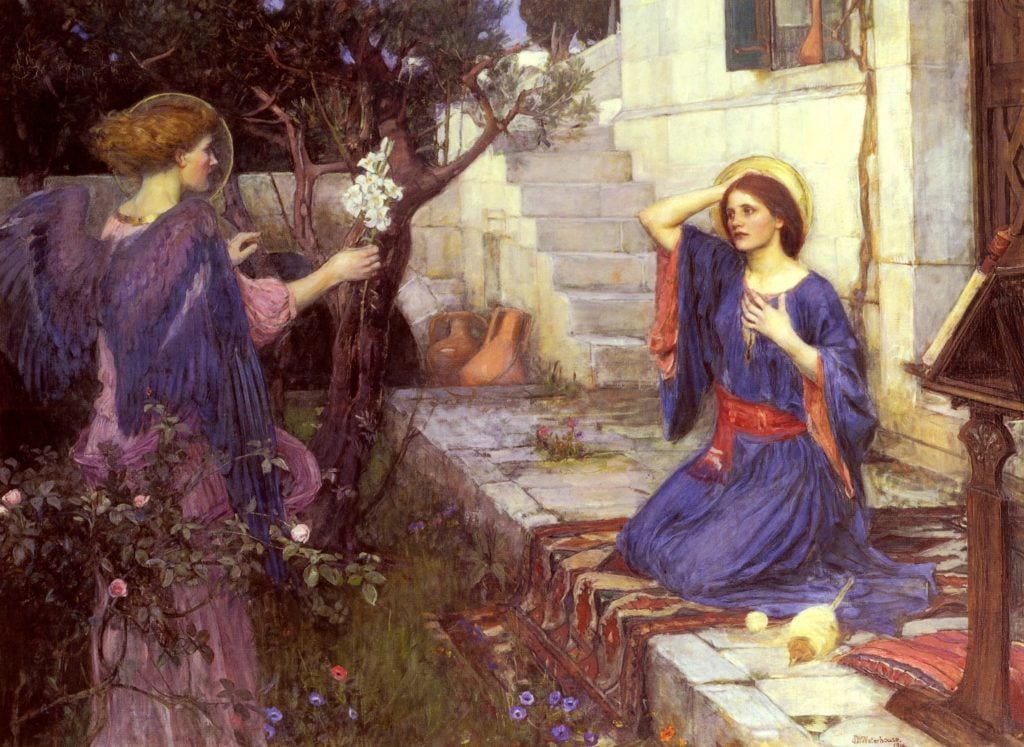 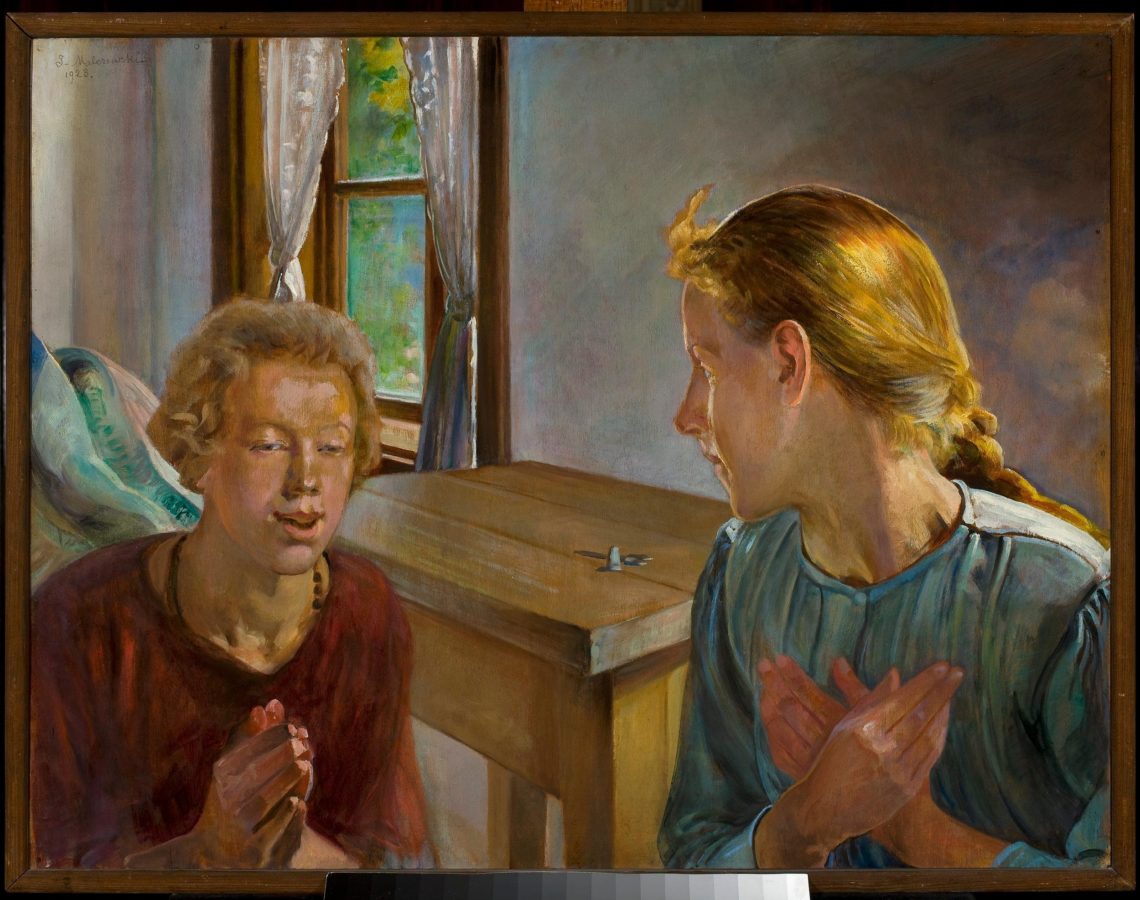