Painting of the Week: Giotto di Bondone, Adoration of the Magi 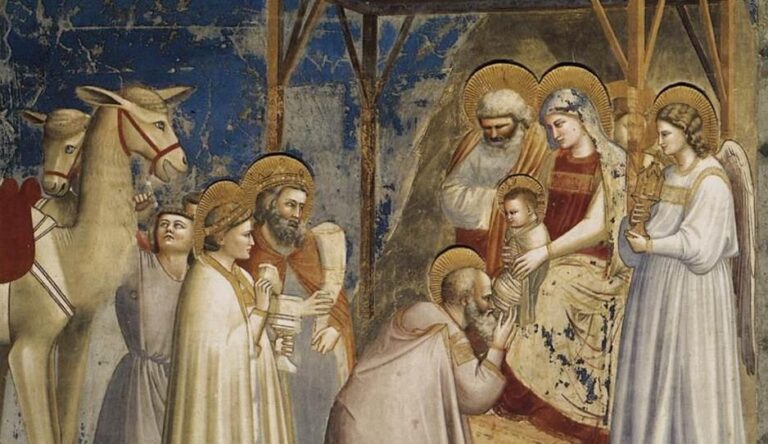 January 6 in the Christian calendar is a day devoted to the Magi. According to the Bible, Three Wise Men from the East come to Bethlehem to visit Baby Jesus, bearing gifts of gold, frankincense and myrrh. There are probably thousands of depictions of that scene in art history, known as Adoration of the Magi. Among all of them, I chose my favorite – a luminous fresco by Giotto di Bondone from the Scrovegni Chapel in Padua.

I was lucky to visit the Scrovegni Chapel along with two other DailyArt Magazine authors – Zuzanna and Magda. It was a sunny late March morning in 2017 and afterwards, we went for a cappuccino together. First, however, we had a real feast for the eyes. All the internal surfaces of this small chapel, an adjacent to the Augustinian monastery in Padua, are completely covered with frescoes by the late Middle Ages revolutionary genius, Giotto di Bondone.

The overwhelming fresco cycles show the Life of Christ and the Life of the Virgin. Additionally, at the rear of the chapel, a huge Last Judgement was painted. It was commissioned to Giotto by the affluent Paduan banker, Enrico Scrovegni. The church was consecrated in 1305. It is also known as the Arena Chapel because it was built on land purchased by Scrovegni that abutted the site of a Roman arena.

When getting the commission, Giotto was in his late thirties and a renown Florentine painter who already had worked for the Franciscan friars in Assisi and Rimini and also for the Paduan Basilica of Saint Anthony. He took a team of about 40 collaborators to complete the decoration of the chapel. They worked for 625 work days. A “work day” meant that portion of each fresco that could be painted before the plaster dried and was no longer “fresh” (fresco).

The fresco cycle is organised along four tiers, every tier is divided into frames, each forming a scene. These show episodes from the stories of the various protagonists of the Sacred History. The iconography of the scenes is comparable to other contemporary cycles, what is new, however, is Giotto’s monumentality of forms and clarity of compositions. As well as his revolutionary way of painting figures which are solidly three-dimensional, have faces and gestures that are based on close observation and are clothed, not in swirling formalized drapery, but in garments that hang naturally and have form and weight.

Adoration of the Magi, is a part of the Life of Christ cycle and is placed in the middle tier on the south wall. I love its generally toned colors yet vivid in details – the navy blue of the sky lightened up by the Star of Bethlehem which led the Kings (shown in a form of a comet shooting through the sky; it is thought that Giotto was inspired by the 1301 apparition of Halley’s Comet!) and the burgundy red dress of St Mary contrasting with light beiges and whites of other figures’ garments and background rocks. The simplicity of the landscape and the crib do not distract the contemplating character of the scene but rather underlines its intimate atmosphere. No matter how serious the scene would be, for me, a hopeless fan of animal depictions in art, the best part is these two sweet camels on the right, of which one – I bet – is smiling.