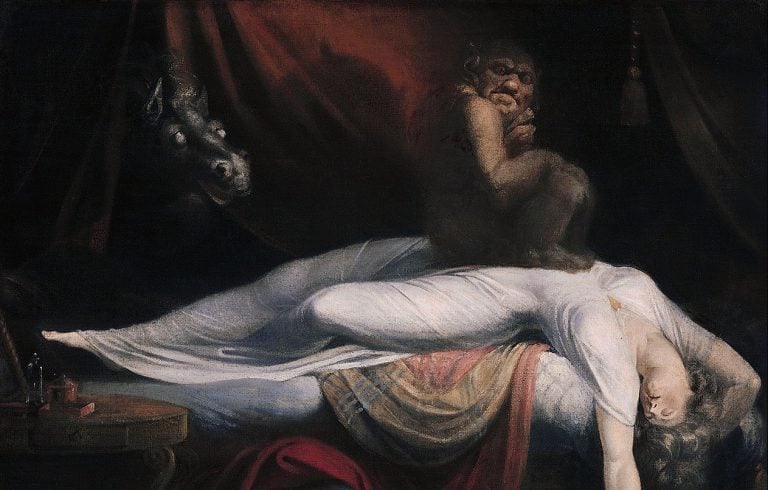 What a horror spectacle! Some dark, irrational forces must be at play here. Henry Fuseli painted The Nightmare in 1781. It is probably his most notorious artwork. To this day, it remains an iconic gothic depiction for its unconventional subject matter, referencing popular themes in 19th-century psychoanalysis, such as the troubled unconscious mind and the terror of sleepers.

Henry Fuseli (1741–1825) was a Swiss artist known for his interest in the supernatural. He spent most of his life in Britain and was a great influence on younger British painters from the same time period, like William Blake (1757–1827).

Fuseli also studied the humanities, developing an interest in classical philology and becoming proficient in three languages. Maybe a lesser-known fact about him, Fuseli was educated as a theologian and ordained as a Zwinglian minister in 1761. He was elected an Associate of the Royal Academy of Arts in 1788, a full Academician in 1790, and a Professor of Painting nine years later.

This painting was first exhibited at the Royal Academy exhibition in London in 1782. It depicts a sleeping woman with her arms thrown at her sides. Beside her, two creatures catch the viewers’ attention: an incubus and a mare.

Unlike many paintings displayed at the Royal Academy, The Nightmare does not have a moralizing subject, nor is it inspired by literature, the Bible, or history. However, many interpretations of the invented scene seem to suggest that the painting is referencing popular themes in 19th-century psychoanalysis, describing the powerful influence of dreams and the unconscious, sleep paralysis, and the meaning of nightmares. Nevertheless, this was not the first or the only time Fuseli approached the subject of dreams. His other artworks on this subject include, for instance, The Shepherd’s Dream from Paradise Lost (1793).

Returning to the artwork, the squatting incubus on the woman’s chest is a demonic spirit that has intercourse with unsuspecting, innocent women in their sleep. His apelike appearance is certainly terrifying. The great magician Merlin, for instance, was thought to have been fathered by an incubus, just like witches, demons, and deformed children. Its female counterpart is called a succubus.

The other creature, a dark horse peeking from behind the curtains, is a mare. A mare, or mara, is an evil night spirit that torments humans in their sleep. Samuel Johnson defined the mare in A Dictionary of the English Language (1755) as:

[A] spirit that, in heathen mythology, was related to torment or to suffocate sleepers. Morbid oppression in the night resembling the pressure of weight upon the breast.

A Dictionary of the English Language, 1755.

Thus, Fuseli’s painting can also be understood as a representation of sleep paralysis. Sleep paralysis is a temporary inability described as a loss of muscle control (or atonia) due to dissociating sleep phases. During sleep paralysis, those affected cannot move or speak. In addition to atonia, sufferers may experience suffocating chest pressure and brief episodes of hallucinations, which give the impression that a dangerous person or presence is in the room. Most people experience sleep paralysis once or twice in their lifetime.

Or, who knows? Maybe the woman is just dreaming…

The flowing red drapes symbolize blood. In fact, the whole scene is very theatrical, striking an overall dramatic atmosphere through the sharp use of lightning contrasts. Fuseli was often inspired by literary works of art, especially theater, such as Shakespeare’s Macbeth or A Midsummer’s Night Dream.

Similar to classical theater displays, the only light source in the room falls on the sleeping woman, the protagonist, while all the other elements are slowly disappearing in the background. It could be that, in Fuseli’s vision, we may never fully know what unknown horrors lurk in the dark, troubling the unconscious mind.

In the end, some art critics are dissatisfied with the psychoanalytical interpretation, arguing that the painting had a far more personal meaning for Fuseli. His romantic interest, Anna Landolt, was engaged to another man. It is possible, therefore, that the painting is his response to the engagement, a sign of romantic rejection and unrequited love.

A true gore classic and a standalone gothic masterpiece, The Nightmare, was incredibly influential at the time of its creation, finding itself at the intersection between Neoclassicism and Romanticism. It was reproduced many times since 1782 by Fuseli himself and other artists, such as Thomas Burke and his matching stipple engraving from 1783. The painting is also believed to have influenced gothic literature. Rumor says that Mary Shelley was inspired by The Nightmare to write Frankenstein (or The Modern Prometheus).