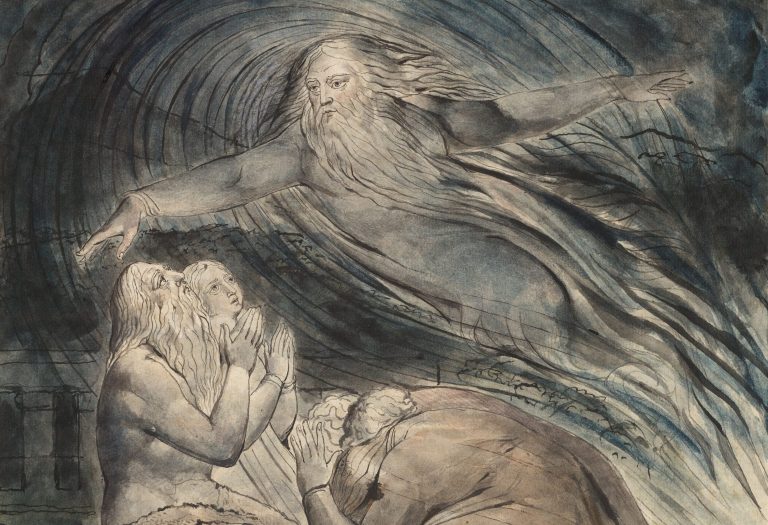 William Blake’s Songs of Innocence and of Experience Explained

William Blake (1757–1827), an English Romantic poet, painter, and printmaker, was commissioned by his patron Thomas Butts, a civil servant, to create around 80 works on various biblical subjects. His own interpretations of the famous scenes from the Bible are penetrated with spirituality, magic, and Blake’s personal experience. Just watch William Blake’s Bible!

When Blake was eight, he told his mother he had seen a tree full of angels “bespangling every bough like stars”. This apparition took place in Peckham Rye, one of south-east London’s green spaces. This illustration refers to the moment in the New Testament before Jesus’ Resurrection. One can sense some tension here, suspended in the air. What is it? We don’t know just as we don’t know what comes after death.

Blake, who was an apprentice to an engraver at the age of 14, is considered a master of this technique. This engraving was made after Henry Fuseli, yet Blake added his own interpretation – his Satan looks like a tortured man. Blake experimented with the oval-pointed echoppe needle, an 18th-century French engraving method. You can notice it in Satan’s flesh which is made with tiny incisions enmeshed in the crosshatching.

According to the beliefs, Adam and Eve were the first people on Earth, with Eve created out of Adam’s rib. Here they’re shown as lovers surrounded by the beauties of the flora of Eden. However, this idyll is being observed from the sky by an intruder, Satan, who’s depicted with his symbolic animal, the serpent. Is he already plotting how to tempt Eve?

Adam and Eve had two sons – Cain and Abel. Cain was a farmer while Abel herded animals. When brothers made sacrifices as offerings to God, he liked Abel’s gift much better. Envious Cain killed his brother in revenge. This painting depicts the moment when the parents find Abel’s body and Cain realizes how awful a crime he committed. The atmosphere of despair is reflected in the bloody-red sun and dark stormy clouds. They herald the new era for Cain and the entire humanity.