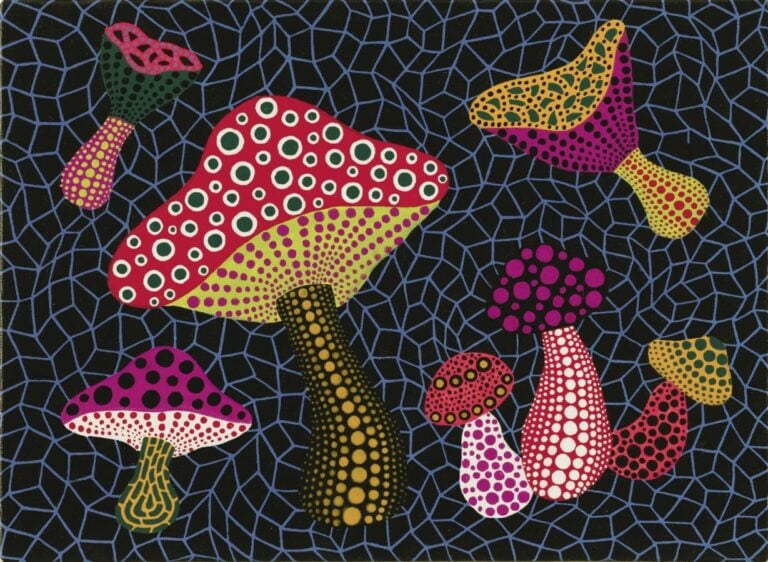 Autumn is a real mushroom season, so let’s have a look at some tasty, quirky and trippy fungi paintings that will inspire you to go mushroom hunting or prepare some tasty meals.

When Hokusai made this print in the Edo Period (1603–1868), mushroom picking was very fashionable. It was appealing especially to the ladies of the well-to-do merchant classes. They would go with gathering baskets to the satoyama, the countryside hills, to celebrate the coming of the fall season.

Otto Marseus van Schrieck was one of the leading painters of forest floor still-lifes (yes, there are enough of this sort of painting so that we can even talk about a sub-genre that had a great period of vogue in the mid-17th century). Depicted with meticulous detail the creatures and plants of the forest undergrowth, often in nocturnal settings, Schrieck presented a variety of mushrooms and flowers, including morning glories and a tulip, a frog, a snake, and various butterflies.

Yayoi Kusama is probably the most known Japanese artist nowadays. Her psychedelic compositions can be recognized immediately; when you see a gigantic form covered in small dots, it’s probably hers. She has worked with a wide range of media: painting, collage, soft sculpture, performance art, and environmental installations. As a precursor of Pop Art, she has always been interested in repetition and pattern, and her works influenced such great artists as Andy Warhol, Claes Oldenburg, and George Segal.