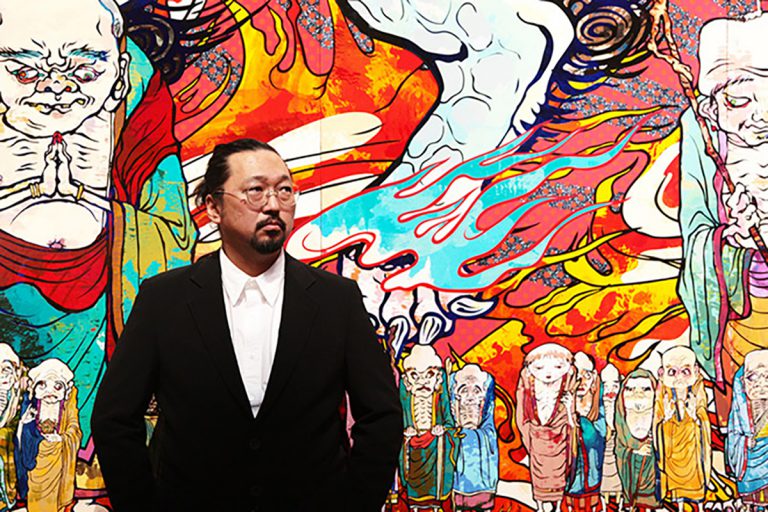 I was first introduced to Takashi Murakami in 2019 when I listened to Billie Eilish’s song You Should See Me in a Crown. The moment I saw those iconic flowers in the video, I became an instant fan and started going down an internet rabbit hole, discovering Murakami and his work. Like Andy Warhol, he makes us question our definitions of fine art and commercial art.

Murakami was born in 1962 in Tokyo, Japan. Growing up, he had been involved in the otaku subculture (a community of people obsessed with anime and manga). Murakami joined university intending to work in anime. Instead, he ended up specializing in Nihonga, the traditional Japanese style of painting. After completing his Ph.D., he spent a year in New York, getting inspired by western contemporary artists like Jeff Koons. Upon returning home, Murakami struggled in the local art market. He felt that after the war, Japan had lost its authenticity. It had become too westernized. He also felt that the traditional Nihonga didn’t quite jive with the spirit of present-day Japan. He wanted to create something modern and uniquely Japanese. Murakami combined ideas from otaku, Nihonga, and his time in the US to create his signature style of Superflat. Superflat style is simultaneously high and low, “flat” as it were. It derives subject matter from consumerism and revels in mass appeal.

In 1993, Murakami created his alter-ego, Mr. DOB, a chaotic and somewhat terrifying amalgamation of Mickey Mouse, Sonic the Hedgehog, and Doraemon. Murakami continues to replicate Mr. DOB into keychains, T-shirts, art prints, and much more. He tweaks his alter-ego in each iteration, reflecting his evolution as an artist. Mr. DOB started out quite tame, constructed of circles, with large eyes and a wide grin. Over time, he developed spiky teeth, different-colored eyes (sometimes more than two), mismatched ears, and even tentacles. Sometimes he seems to have two faces melted together. He has also gotten more colorful and trippy.

Over the years, Murakami has collaborated with a variety of brands like Hello Kitty, Shu Uemura makeup, Hublot watches, Uniqlo, etc. Of note among these is the long-term collaboration with luxury brand Louis Vuitton. In 2003, Murakami joined hands with the brand to produce the Monogram Multicolor collection of bags. It was a bold move for the fashion house because they let the artist reinterpret their famous monogram logo. Until then, the logo had been considered to be rather unchangeable. The Monogram Multicolor bags were sported by celebrities and were so successful that the collaboration continued until 2015. That is a whopping 12 years. Even today, there is a thriving resale market for the bags and they still command high prices. Other popular collections within this artistic collaboration are Cherry Blossom, Panda, Cerises, MOCA Hands, Monogramouflage, and Cosmic Blossom.

Murakami began to use the motif of flowers back in 1995, soon after moving to New York. Flowers were his way of finding relief from homesickness. They were about joy breaking through sadness. If you look closely, there seem to be tears in the flowers’ beaming eyes. They also connected him with his artistic roots: flowers are important in Nihonga. The flowers became iconic after the release of the Cherry Blossom bags for Louis Vuitton.

More recently, his iconic flowers were featured in Murakami’s collaborations with the brands Supreme (street fashion) and Perrier water during the Covid-19 pandemic. The artist believed that the colorful design would boost the morale of people during those challenging times. The Supreme t-shirts he designed successfully raised over $1,000,000 for pandemic charities.

Located within the Pacific Ring of Fire, Japan has always suffered from natural disasters, so much so that they have become a part of its culture. Disasters are also present in Murakami’s art: the atomic bombings of Hiroshima and Nagasaki and the 2011 Fukushima reactor meltdown. In his art, the death and destruction caused by these disasters are represented by images of mushrooms and skulls. The crazed multicolored palette and the strange googly-eyed creatures probably reference the mutations caused by radiation. Since the subject is so tragic, Murakami brings some hope into these compositions by juxtaposing his joyful flowers against the morbid motifs. Even the rainbow colors can be interpreted either way: as an acid-induced fever dream or as whimsical, carefree fun.

The 500 Arhats is a 100-meter-long painting created by Murakami after the Fukushima disaster. It was meant as a “thank you” to Qatar, for providing much-needed aid to Japan. Apart from its impressive scale, it is notable because it marked a change in style for Murakami. The Nihonga influence is even more pronounced in this painting. Its subject also has religious overtones which were absent from Murakami’s earlier work. The arhats are disciples of the Buddha. The painting tells the story of how they help people heal from their suffering.

Ironically, even though his work is all about modern Japan, he is not well-liked there. In his own words, in Japan, “he’s just the money guy.” He is more popular in China and the US than in his own country. Now would you like to go down your own merry Murakami rabbit hole? Check out his Instagram to get started. And his music videos for Pharrell Williams and Kanye West.