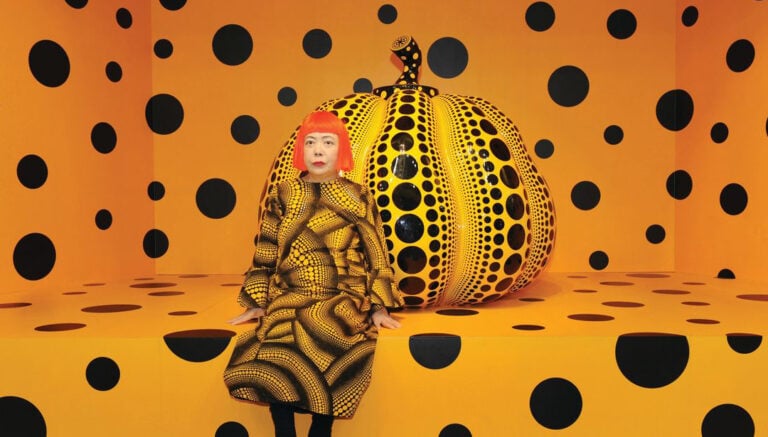 Yayoi Kusama in front of her work Pumpkin. The Art Georgeous.

Yayoi Kusama at the Tel Aviv Museum of Art

An Art Dialog Between Yayoi Kusama and Georgia O’Keeffe

Yayoi Kusama, the legendary Japanese artist born in 1929, began her career 69 years ago. Nevertheless, the world discovered her just a couple of years back. Now it’s trying to make up for a lost time through numerous exhibitions that are being organized around the world. In 2017, Kusama even opened an entire museum in Tokyo dedicated to her polka-dotted oeuvre. But what do pumpkins have to do with all this?

Pumpkins accompanied Yayoi Kusama from her early childhood. She grew up surrounded by a seed nursery owned by her family. With their whimsical shape and color, they represented a source of radiant energy and have been a lifelong inspiration and a beloved motif in her works. We may dare say that Kusama found a reflection of herself in their grotesque boldness, and simultaneous humility and simplicity. Therefore her pumpkins can serve as a sort of self-portrait.

Kusama launched her first Infinity Mirror Room in 1965 and has now created more than 20 such mirrored spaces, which are designed to fully immerse the spectator. The rooms are small and entirely covered in mirrors (on the walls, ceiling, and floor), which enhances the feeling of infinity. In the case of her rooms filled with pumpkins, it is a pumpkin infinity, as the artist fits 62 acrylic yellow pumpkins covered in black polka dots in the room.

She first began covering surfaces with painted polka dots when she was 10. As she later explained, she had been prompted by a series of vivid hallucinations that transformed the world around her into “dense fields of dots.” In the late 1940s, she spent two years in Kyoto, painting pumpkins because, as she has written, “pumpkins bring about poetic peace in my mind. Pumpkins talk to me.”

She has worked in various media, drawing from styles ranging from Surrealism to Pop Art. Her psychedelic art is difficult to categorize, which wins her unlimited freedom and many collaborations outside of fine arts, like the one with the high fashion brand Louis Vuitton.