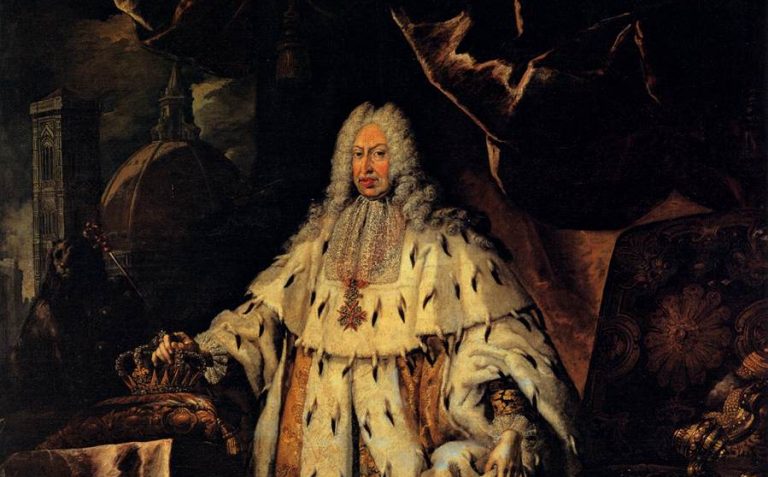 The Medici Family. For most, these three words conjure up images of Cosimo de’ Medici, Lorenzo de’ Medici, or the many artists and artworks patronized by the wealthy Renaissance family. Few, however, pay much attention to the final Grand Duke of the Medici dynasty, Gian Gastone de’ Medici, despite being the first and only openly gay Grand Duke of the Medici and his significant role in ending the bigoted, oppressive policies of his predecessors. Thus, in honor of LGBTQ+ Pride month and to highlight and amplify his achievements, we present the legacy of Gian Gastone de’ Medici, the final Medici ruler.

Gian Gastone de’ Medici was born in 1671 as the second son of Cosimo III de’ Medici and Marguerite Louise d’Orléans. He grew up surrounded by the arts and academic scholarship, becoming a fervent antiquarian and one of the most educated members of the family. He loved botany, conducted his own science experiments, and spoke more than six languages, including German, Spanish, and English. Being a part of the latter stages of the Medici family line, he was born into a family that prioritized authoritarianism over republicanism, instituted oppressive, bigoted policies, and led to the decline of cultural celebration in Florence. As a result, Cosimo III’s second son grew up with disdain for his father’s rulership and lacked interest in politics.

Possibly because of Cosimo III’s bigoted views and distate for scholarship, Cosimo III strongly disliked his second son and refused to afford him the same privileges as his siblings, such as an allowance or court benefits. Even when the Prince had the option to marry Isabel Luísa of Beira to strengthen the family’s relations with Portugal, Cosimo III declined to give the required improvement to his son’s allowance, scuppering any chance of the marriage. This lack of paternal support likely caused Gastone to descend into a state of depression and melancholy that he would struggle with for the rest of his life. Unfortunately for him, this was just the beginning of his struggles with mental health.

In 1697, he was forced to marry Anna Maria of Saxe-Lauenburg and leave Florence to move to a small village in Bohemia. Isolated and cut off from his friends, family, and intellectual societies, the young prince began misusing alcohol, gained a considerable amount of weight, and started gambling uncontrollably, leading to an accumulation of significant debts. When he tried returning to Florence in 1698, his father blocked his return and sent him back to Bohemia. Finally, he returned to Florence in 1708 – much to the chagrin of his father – and separated from Anna Maria.

In 1723, Gastone assumed the throne following his father’s death, acquiring Florence that was bankrupt, politically weak, and struggling with rising poverty. Although many contemporary writings of him label him as a weak ruler with no ambition, the Grand Duke, in reality, reinvigorated a weak government and economy, and instituted a more tolerant rule.

Recognizing his father’s policies were widely disliked by the public, he put an end to them. This included abolishing public executions (which were used as punishment for acts ranging from gay sex to courtship), political and literary censorship, bans on teaching new ideas in schools, extortionate taxes, and “Pension on the Creed”, which were payments made to Muslims and Jews who converted to Christianity.

By doing so, he ended the authoritarian stronghold his father held over the nation and created a Florence that was more inclusive and more in line with the Renaissance ideals of intellectual curiosity and scholarship. In addition to ending oppressive policies, he fixed the national debt, separated church and state by removing corrupt religious officials from the government, and energized the agricultural, commercial, and industrial economies. As a result, the Grand Duke became widely loved and celebrated by the general public.

What is perhaps most telling of the Grand Duke’s priorities is the lack of propaganda art that was popular among his predecessors. Many former Medici rulers loved to commission artworks that associated the Medici family with religion or political control.

For example, Vasari’s Apotheosis of Cosimo I depicts Cosimo I’s crowning in Heaven, the artist portrays the Medici ruler as ruling both Florence and Heaven, watching over the world as God does. Since Gastone sought to lessen the power of the Church in state affairs and reduce political corruption, patronizing propaganda portraits were antithetical to his political values and goals. Furthermore, he despised his family’s penchant for ostentation and authoritarian desires, and so he likely chose to commission very few portraits of himself. One that does exist, however, highlights his importance to the city of Florence.

In Richter’s portrait of the Duke, he depicts the city of Florence shrouded in darkness, perhaps alluding to the dire situation the city was in when Gastone assumed the throne. The Grand Duke, however, is covered in light, symbolizing his enlightened rule and ushering in intolerance and economic rejuvenation. Alternatively, it could be in reference to Florence’s impending sorrow given it was known the Grand Duke was moribund and bedridden when this painting was made.

Another example can be found in the coins that were minted during his father’s reign versus the coins during his reign. Cosimo III, being a particularly religious person, had numerous coins depicting religious iconography and images to (1) assert Christian hegemony over the state and (2) associate state authority and his rulership with religion. His son, however, chose to put an end to religious icons shown on coins and elected to show images he felt were more suitable to government and politics, such as the passage of rulership by showing a female figure handing the scepter and crown to him (left coin) and the fort of Livorno (right coin).

Upon accomplishing his goals, the Grand Duke transferred his duties to Governor Violante Beatrice and decided to live the rest of his life separate from public life in 1729, choosing to live in his bedroom until death. During this time, he frequently hosted men, was often ill, and struggled with alcoholism.

Unfortunately, much of what is written about the final Medici ruler casts him in a negative light, criticizing his sexual activities with men and conflating his decision to seclude himself from the public as being a weak leader. These accounts – besides being laced with stigmatizing and at times anti-gay rhetoric – not only fail to account for his important contributions to history but are also inconsistent and possibly exaggerated by his successors to curry favor with the public and distort the Grand Duke’s popular image. In actuality, he was widely regarded as one of the most popular Medici rulers by the general public despite only ruling for 14 years.

It was written in 1739 by Charles de Brosses, a French writer and politician, that “the Tuscans would give two-thirds of their property to have the Medici back, and the other third to get rid of the Lorrainers”. Furthermore, after the French occupied Tuscany in 1799, the public lamented their desire to have the late Medici ruler return to the throne, despite him being dead for 62 years. Clearly, the last Grand Duke of Tuscany was loved by his subjects. Perhaps we should all pay a little more attention to his accomplishments too.

Cameron Ormiston is an art historian enthusiast who recently graduated from UC San Diego. Now based in Washington DC, Cameron researches health disparities among racial/ethnic minorities and LGBT individuals. He is currently applying to medical school to become a physician investigator. You can learn more about him here.