The Enfant Terrible of Renaissance Italian Art: 500 Years of Tintoretto in Venice 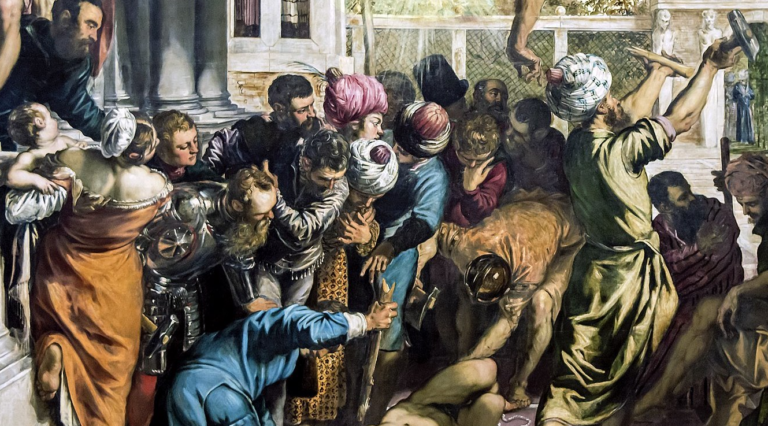 Painting of the Week: Jacopo Tintoretto, Marriage at Cana

Tintoretto, the enfant terrible of Renaissance Italian Art has now his moment. Born 500 years ago in Venice, is now celebrated on various exhibitions around the city. The two major ones are held in Palazzo Ducale and in Gallerie dell’Accademia. Masterworks from both exhibitions will travel next spring for a combined presentation at the National Gallery of Art in Washington, DC, the first of its kind in North America.

Tintoretto was born in Venice in 1518, as the eldest of 21 children. His father, Giovanni, was a dyer, or tintore; hence the son got the nickname of Tintoretto, the little dyer, or dyer’s boy. Celebrated in his lifetime as one of the greatest painters of his day, his dynamic and innovative compositions, dramatic chiaroscuro effects, glowing colours, muscular figures, almost impressionistic, brushwork established Tintoretto’s reputation as “the world’s most daring painter” as one of his early biographers described him.

Renaissance art history loved legends. One of them says that in childhood Jacopo began daubing on the dyer’s walls; his father, noticing his bent, took him to the studio of Titian to see how far he could be trained as an artist. Tintoretto had only been ten days in the studio when envious Titian sent him home because his drawings were so good.

What we know for sure is that no records of Tintoretto’s training survive. What we don’t know, is the attribution of his early works. There is actually not a single one firmly documented to be by the young Tintoretto. Every attribution has to be based on the visual evidence. It is a horror for art historians examining the vast oeuvre of the artist.

Tintoretto’s innovative pictorial techniques enabled him to paint rapidly. His muscular human figures in dynamic motion filled countless churches, confraternities, government buildings and private palaces. He was also the most dedicated practitioner of religious paintings in Italy in the second half of 16th century. As a fantastic storyteller, he depicted the narratives with verve and drama. The speed with which he painted, and the unprecedented boldness of his brushwork, were both admired and criticised by his contemporaries. For his phenomenal energy in painting, he was termed Il Furioso.

This self-portrait painted around 1546/1547 is timeless. It could have been painted in 16th, 17th, 18th, or 19th century. There are no clues we can follow. We only see the intense gaze, the determination, ambition and impatience of the 28-year old artist, who hadn’t yet been successful but already hungry for fame.

Jacopo wasn’t a prodigy. He had to polish his talents and do some hard work to achieve what he wanted. 26 works from the first decade of Tintoretto’s career can be seen in Galleria dell’Accademia along a broad panorama of paintings, drawings and prints from Venice of the 1530s and 1540s.

The Gallerie exhibition ends with a commission which was a breakthrough for the young Jacopo. More than 13 feet high and almost 18 feet wide, the painting stood at the front of the Sala Capitolare of the Scuola Grande di San Marco, one of the major Venice confraternities. The Miracle depicts one of many posthumous miracles of Saint Mark – his rescue of a Christian slave tortured by his master, who had been enraged by the man’s pilgrimage to San Marco in Venice to venerate the saint’s relics. The drama of the scene is heightened by the theatrical contrast of light and shadow. The unveiling of the painting created a sensation and opened up a flood of commissions.

After the Miracle of the Slave Tintoretto became a superstar. He created huge scale compositions and maintained a large family studio, where he employed numerous assistants including his three children Domenico, Marco, and Marietta. Marietta was his favourite – she probably contributed to her father’s paintings with backgrounds and figure blocking, as was the usual distribution of labor in painting workshops of the time. After her premature death at the age of 30, Carlo Ridolfi, an Italian art biographer and painter of the Baroque period stated she was one of the most illustrious women of her time, having the same manner of skill as her father while displaying “sentimental femininity, a womanly grace that is strained and resolute.”After her death, the decline in work produced by Tintoretto was ascribed to grief for his daughter, rather than the loss of a skilful assistant.

Tintoretto is famous for huge canvases with mythological or religious scenes but he was also a prolific portrait-maker. The number of his portraits is enormous; their merit is uneven, but the really fine ones cannot be surpassed. Sebastiano del Piombo remarked that Tintoretto could paint in two days as much as himself in two years; Annibale Carracci that Tintoretto was in many of his pictures equal to Titian. This was the general opinion of the Venetians, who said that he had three pencils—one of gold, the second of silver and the third of iron.

The crowning production of Tintoretto’s life, the last picture of any considerable importance which he executed, was the vast Paradise, in size 74.1 by 29.9 feet, reputed to be the largest painting ever done on canvas. It is a work so stupendous in scale, so colossal in the sweep of its power, so reckless of ordinary standards of conception or method, that it has defied the connoisseurship for three next centuries, and has generally (though not with its first Venetian contemporaries) passed for an eccentric failure; nowadays it seems to be so transcendent a monument of human faculty applied to the art pictorial as not to be viewed without awe.

After the completion of the Paradise Tintoretto never undertook any other work of such an importance. In 1594, he was seized with severe stomach pains, complicated with fever, that prevented him from sleeping and almost from eating for a fortnight. He died on May 31, 1594. He was buried in the church of the Madonna dell’Orto by the side of his favorite daughter Marietta.

Learn more about the exhibitions: