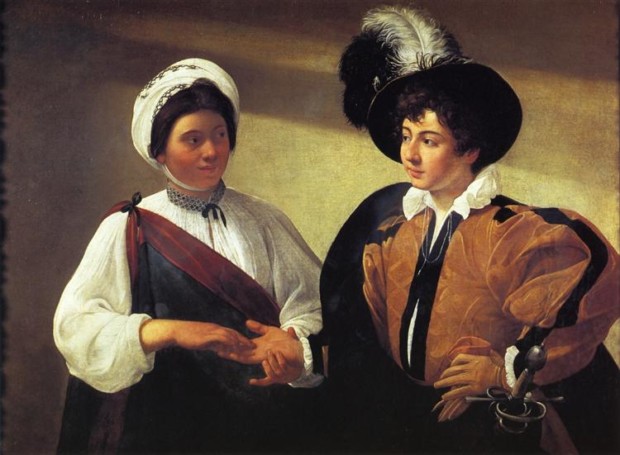 St Andrew’s Day is not only a Scottish holiday. In Poland we have this old and pagan tradition of fortune-telling on the night of the 29th of November. We do magic tricks like pouring hot wax through a small hole in a door key or we try to peel an apple in one continuous go.
Anyway, these traditions inspired me to show you paintings which treat the same subject: fortune-telling!

Caravaggio, The Fortune teller, 1599, The Louvre

Caravaggio was the guy who started the fashion of depicting fortune tellers. Many generations of Caravaggisti who followed into his footsteps of stark chiaroscuro contrasts and shady characters gave this topic a try. You can see a fortune teller woman who is trying to trick a young rich boy who is feeling very cool because he’s wearing a fancy hat. I love their exchange of gazes- when I look at them, I’m not sure anymore who’s gonna trick who in the end.

Second and much tenser encounter

Same scene, slightly altered, and just 30 years later (for painting at this time it’s not that many, trust me) by de la Tour  who was one of the French Caravaggisti. Here, however, the fancy boy is not feeling so self-confident anymore. I guess I wouldn’t either if I was surrounded by four women looking at me so intently. Look closely on the left bottom corner- boy’s money is not going to stay in his pocket any longer. Poor guy.

An encounter which leaves mixed feelings

Changing setting, now we are in a rococo garden and the fortune-teller is having a try on a lady with a small girl. Look at these three very different facial expressions: a girl is laughing, probably at the news that the gypsy has just pronounced. Her guardian, however, looks very concerned. What was the fortune told? We can only imagine.

An encounter with the viewer

The first beautiful portrait of a fortune teller I’m showing you. It’s a fascinating painting, as the brushwork, looking so anxious and rapid, brings us right into the middle of the mysterious world of this woman. Everything seems half-real, ephemeral and magic, and the direct gaze of the girl challenges us saying: Do you believe me? Vrubel’s technique made him to be associated with Symbolists and Art Nouveau, yet he didn’t want to be included in any of the general trends, he preferred to stay on his own.

And that’s an attempt on the same theme of a Finnish painter, Helena Sofia Schjerfbeck. As most Expressionists, she did many portraits, rather than group studies, because this way she was able to render the psychic of the sitters. This lady is rendered in a classic 3/4 approach (bust-like), yet a simplified drawing of her face in black and well-defined lines references the woodblock prints, a technique used also by the German expressionists. Her pensive and rather sad look introduce a gloomy atmosphere. Is it because she saw in her cards a misfortune coming up?