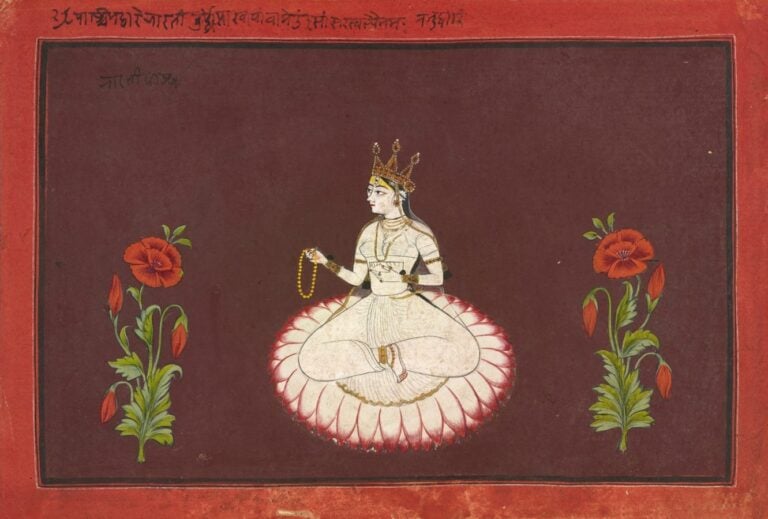 Saraswati is the Hindu goddess of knowledge and the arts. Remarkably, in the Hindu tradition and in rituals, Saraswati occupies a more prominent role than her celestial consort, Brahma — the creator of the Hindu pantheon. She is also a member of the revered trinity known as Tridevi, along with Lakshmi and Parvati, the female counterpart to the male trinity comprising Brahma, Vishnu, and Shiva.

Representation of Words and Water

Saraswati is an amalgamation of the words Saras and Wati. Saras in Sanskrit refers to pooling water, but has also been translated to mean words or speech; while Wati is a verb for “one who possesses”. As such, Saraswati has come to mean both the possessor of pooling water (such as lakes or rivers) or the possessor of speech. She has evolved into the presiding deity of knowledge, wisdom, and purity. Due to her role as the consort of Brahma, Saraswati also represents fertility.

The Goddess of Knowledge

Saraswati has been invoked since ancient Vedic times as an essence of sanctity. She is the embodiment of language, speech, and eloquence. Also she is regarded as the goddess of wisdom and knowledge. She is invoked by those seeking divine clarity in their pursuit of knowledge, such as students or academics. In Hindu tradition, books are considered the embodiment of Saraswati and considered sacred. Saraswati has also been associated with music.

The iconography of Saraswati is heavily focused on the portrayal of purity. She is often (though not always) depicted in a white saree. Her vahana or animal companion is a white swan named Hamsa. In some representations, there may be a peacock depicted near Saraswati. This is to highlight her reverence and illustrate how the goddess is unperturbed by vanity. The focus of her being is not purely the pursuit of knowledge, but of knowledge as a sanctifying concept.

Saraswati is also the personification of water. It is one of her primary attributes and she is often depicted with or close to flowing waters. Water is a means to achieve cleanliness, thus water here can be interpreted as an instrument to achieve the purity of thought and knowledge. However, another association of water could also be related to Saraswati’s ancient origins as a river goddess. Before developing her currently established identity, Saraswati was the personification of the holy river Saraswati. It is unknown whether this river was purely mythological or if it once flowed in antiquity, as the river had already dried up by the later Vedic period. Although there are many theories as to the exact location of this river, some have also speculated that Saraswati may have been a reference to a celestial river… the Milky Way.

Lotuses hold special reverence in Hindu culture. They symbolize beauty or virtue rising from and unaffected by the waters from which they emerge. Saraswati, along with countless Hindu gods and goddesses are often portrayed seated on a lotus rising above murky waters.

As with most Hindu deities, in her hands Saraswati carries her various symbols or attributes that set her apart from the other deities and also allow historians to identify her in art and statuary. The book is a representation of knowledge, the rosary in her hand depicts the great power of meditation, the vina is a traditional South Asian percussion instrument, an attribute of her association with music. She is known by many names such as Shradha, Brahmini or Brahmi, Varnesvari, Vachi,   Veenavadini, and Hansavahini. Her names are directly related to her various associations.

There are different legends explaining the creation of Saraswati. According to a popular creation myth, Brahma was alone in the cosmos prior to creation and longed for company, so he split himself in two, thereby creating his female counterpart. In some versions, Saraswati was created by Brahma’s spit or semen. When Brahma laid his eyes upon his creation, he was captivated by her beauty and developed amorous feelings for her. To escape from Brahma’s carnal intentions, Saraswati tried to escape in all four directions and even tried to fly overhead. However, Brahma was so enthralled by her that he grew five heads — one in every direction and one on top — so he could keep his gaze affixed on Saraswati. This is also the legend of how Brahma grew five heads.

Eventually, Brahma won her over (or more likely, wore her down) and she became his consort. Together they created all beings in existence.

Icons, reliefs, and statuary of Saraswati have been excavated in the ruins of ancient temples all over the Indian subcontinent, Southeast Asia, and as far as Japan. Saraswati is also a venerated deity in the Jain and Buddhist tradition. In Japan, she is known by the name Benzaiten. While the depictions of her may slightly vary, the connotations and associations remain the same. The worship of Saraswati continues to be significant in modern Hinduism.