Nihal Chand and the Kishangarh School 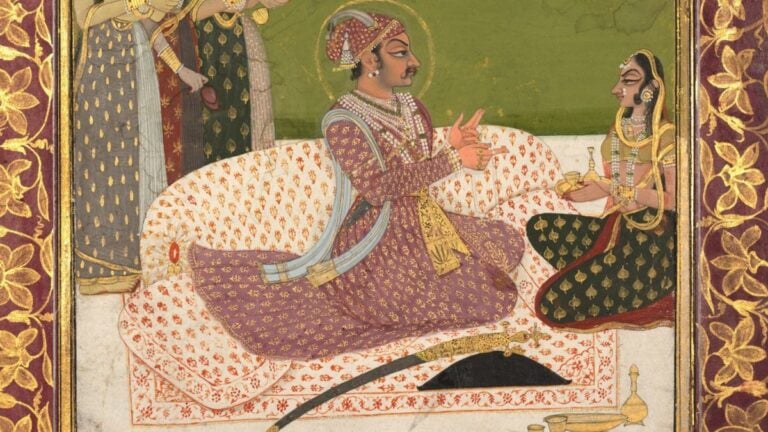 Nihal Chand was an esteemed member of the royal atelier of Kishangarh in the 18th century, under the employ of Crown Prince Sawant Singh. While many royal courts from the princely states of Northwestern India were important artistic centers, the Kishangarh school, and specifically the works of Nihal Singh, became the most well-known and recognizable artworks of the Rajputana.

Jewel of the Rajputana

Kishangarh was a small kingdom-state located in central Rajasthan (in Northern India) from 1611 to 1948. The Kishangarh school of paintings emerged in the 18th century, distinguishing themselves for their distinct style.

Kishangarh paintings are instantly identifiable by the sharp elongated facial features of the men and women, the pointed chins, receding foreheads, lotus-shaped and half-closed eyes, and serpentine locks of hair. The subjects of the paintings are usually set in large panoramic landscapes that portray the beauty of Rajasthan's landscapes and incredible Rajasthani architecture of ornate marble structures, traditional archways, and open terraces.

Influence from the Mughal School

Distinction from the Mughal School

At first glance, there are significant visual similarities between Mughal and Rajput works. However, there exist significant differences in the subjects, dress designs, architectural details and landscape patterns of the artworks. Rajput works are more naturalistic when compared to Mughal works and emphasize heavily the religious fervor sought by the Rajput Hindu patrons, who were often ardent devotees of Krishna.

Depiction of Time in Indian Works

Western paintings usually depict one moment in time on a single canvas, while Indian paintings may portray multiple points of time in a single painting. As a result in these artworks, a character may appear more than once in a single piece. This is all the more impressive when taken into consideration the vast narrative conveyed in the small surface area of these miniature paintings.

Sawant Singh is often credited for the remarkable artistic achievements of Nihal Chand. He is most notably remembered for his great affection towards his step-mother’s servant and court singer, Vishnupriya. Nihal Chand memorialized the passionate courtship of Sawant Singh and Vishnupriya in his paintings.

Divinization of Sawant Singh and Vishnupriya

Sawant Singh was a devout follower of the 'Vallabhacharya', a Krishna cult influential in Rajasthan and Gujarat. In his renderings of the royal couple, Nihal Chand evoked the divine and transcendental love affair of Krishna with the milkmaid, Radha. Divinization of rulers in artworks is a fairly common concept, particularly in Hindu works. Nihal Singh depicted Sawant Singh as the blue-skinned Krishna and his beloved Vishnupriya, as Radha.

Vishnupriya was a glamorous woman and was well known for her beauty and impeccable style. She was referred to as "Bani Thani", which loosely translated means "she who is all dressed up". Nihal Chand portrayed Vishnupriya in his paintings in the classic Kishangarh style with sharp and elongated features. The henna designs on her palms, the painted fingernails, the sheer odhani (a traditional covering garment) and the opulent jewelry of gold and pearls, form the quintessential image of feminine beauty of the Rajputana in the 18th century.

The iconic Bani Thani by Nihal Chand was based on a rough sketch by the Crown Prince - a talented poet and artist himself - before he handed it over to Nihal Chand to paint. This painting became the very symbol of Kishangarh miniatures and was even featured on a commemorative postage stamp issued by the Indian Government in 1973.