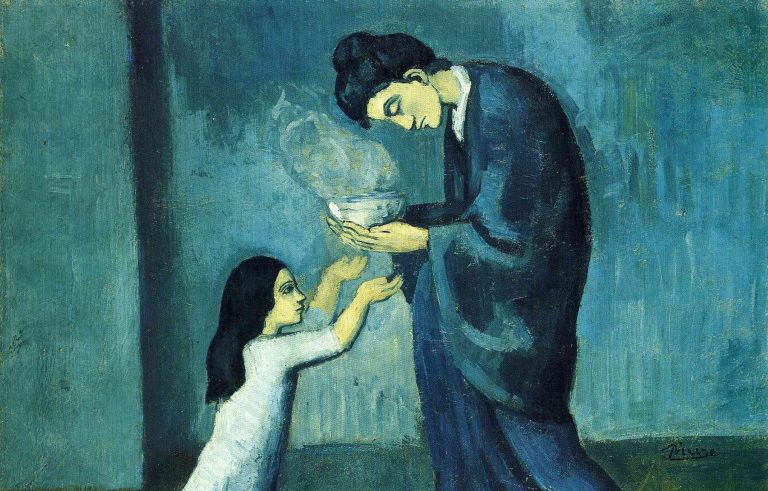 Is blue your favorite color? Even if it is not the case, look at a trio of famous blues from 20th century art history. Henri Matisse, Pablo Picasso, Yves Klein – these are the masters of capturing their visions in this incredible shade.

1. The Blue Nudes by Matisse

The technique of cutting out paper, painting it and arranging it was used by Matisse after he had surgery and could no longer create art using regular tools.

The cut-outs – in particular the Blue Nudes – are remarkable because they resemble Matisse’s earlier sculptural work.

Much of Matisse’s work is in private collections, and for the first time between 2014-2015, the cut-outs were reunited for an exhibition at the Museum of Modern Art in New York.

Between 1901 and 1904 Spanish artist Pablo Picasso (1881-1973) made art that meditates on color. This was a move away from his early work, which is more realistic in style.

Art from the blue period is sombre in color and content, often featuring lonely, isolated, and sad figures. Some people contend this mournful outlook was a result of a close friend’s suicide.

IKB was made in collaboration with Edouard Adam, who was a Parisian art paint supplier and whose shop is still in business on the Boulevard Edgar-Quinet, Montparnasse!

With the creation of IKB, Klein began a period of his career known as, you guessed it, the blue period, during which he made over 200 monochrome paintings and sculptures.

Yves Klein was an important figure in European post-war art, important to the development of performance and minimal art.

The artists in this trio are linked in a number of ways: they are seminal artists; they are white; they are European; they are men. Additionally, the trio possesses the power to provoke debates about the objectification and dehumanization of women in art.