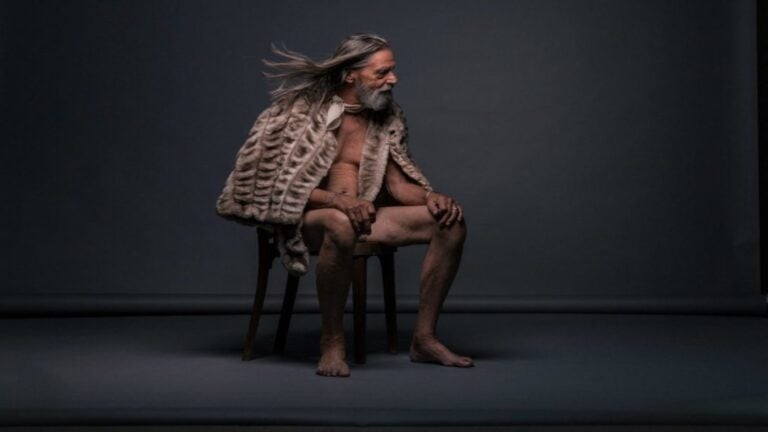 The German performance artist Ulay became known as half of the symbiotic duo Marina Abramovic – Ulay. While Abramovic became the big star, Ulay always kept experimenting and did not shy away from radical actions. Ulay was diagnosed with lymphoma in 2011 and died on 2 March 2020, at the age of 76. Time to pay our respects to him.

Ulay and Abramovic will never be separated in their art. They formed a symbiotic duo as artists and lovers for twelve years. During their performances they kept each other in balance. In their performance The Other: Rest Energy, one held the bow while the other the arrow. They stared in love in each other’s eyes, but also hit each other. Attraction and repulsion always went hand in hand, like it did in their personal relationship. One of their first joint performances, Talking about Similarity in 1976 is a perfect illustration of this. While Ulay stitched his mouth shut with white thread, Abramovic expressed what she thought he was thinking. He was the introverted man who kept quiet, she was the extroverted woman with the highest word.

Nevertheless their intense collaboration, Ulay’s oeuvre doesn’t limit itself to his works with Abramovic.

Ulay, born in 1943 as Frank Uwe Laysiepen, started his art career with Polaroid photographs. His youth was quite turbulent. He fled the house at the age of 15 after the death of his father. When he was 21, he married Paula Françoise-Piso and had a son a year later. Then, in 1968 he enrolled at the art academy in Cologne, but already after a year and a half he dropped out. He moved to Amsterdam in The Netherlands, attracted by the Provo-movement, and started working as a representative of Polaroid. Provo was a Dutch counterculture movement in the mid-1960s that embodied non-violent anarchism and became especially visible through the provocation of the establishment. His experiences with the Provo-movement would influence his later work and as from then, he would always walk on the edge.

Here, in Amsterdam, he started performing in the early 1970s, often without an audience and only with a Polaroid camera as a witness. In these sessions he often investigated his own sexuality. His photographs are intimate, they feature trans­ves­tites, trans­sex­uals and the artist himself. As an example, he dressed as a woman, put on net stockings, dressed as a transvestite. Ulay represented himself as man, woman, neither one nor the other and gave his photographs the mean­ingful title S’he. Some of these performances were extremely radical and led to self-mutilation. In 1972, for example, he cut a piece of skin with a tattoo from his own forearm. And when his wife left him in 1974, cut his feet in an attempt to fit her shoes. Who says that artists aren’t a little crazy?

These
self-mutilations were also visible in his series Solil­oquy (1972-1975). He photographs his own face and body in
close-up and gives an expression of the pain of sepa­ra­tion and self-muti­la­tions.

Ulay often frequented the art centre De Appel in Amsterdam, founded in 1975 and specialized in visual and performance art. Here he met Abramovic when he picked up the young performance artist from Schiphol Airport for a performance at De Appel. And so, their love story began. De Appel still exists and is currently an exhibition space for contemporary art in Amsterdam.

From Amsterdam to the Chinese Wall

Ulay and Abramovic travelled from there in an old Citroën van through Europe. Living like gypsies, they went from city to city to give their art performances. But Ulay was also a womaniser, and from 1986 the relationship broke up. Two years later, they performed an epic work by walking during three months across the 5,000-kilometre-long Great Wall of China. They started walking from opposite ends. While Ulay started in the Gobi Desert and Abramovic by the Yellow Sea, they finally met in the middle, after having walked 2500 km. At their meeting they bade each other farewell, without saying a simple word.

Ulay as an Environmental Activist

After their breakup, Ulay returned working as a photographer. Working alone again, he changed his choice of themes and focused on social and environmental subjects.

He portrayed homeless young people in New York and immigrants at the Amsterdam Albert Cuyp market. He was also concerned with environmental pollution and the scarcity of drinking water. So, he travelled to Patagonia in 2009 to capture all aspects of water for the Waterfonie project. His project resulted in 36 unique pictures of clouds, glaciers, icebergs and rivers. What is remarkable, for that time, is that he used a Nokia mobile phone as camera.

Ulay in his Last Decade

Ulay and Abramović’s lives were destined to be crisscrossed. Years after their break-up, the two met by chance at an ayurvedic retreat in rural India. They became friendly again, and once more later, they lived their most emotional reunion.

That happened in the MoMA in 2010. Abramović celebrated successes with her retrospective The Artist is Present, for which she sat motionless in a chair for three months, looking museum visitors in the eye. Ulay unexpectedly took a seat in the chair opposite her. In the video, you can clearly see that she was moved. Some tears streamed down her cheeks. After a while, they reached out hands. The video of their reunion is very popular on YouTube and people are still watching it, now over a million times. It seemed like a romantic reconciliation, but it didn’t stop Ulay from suing Abramovic for lost earnings in 2016. The judge in Amsterdam proved him right and decided that she had to pay him €320.000 in royalties.

In that same year, 2016, Ulay had an exposition in the German Schirn Kunsthalle in Frankfurt. In a series of photographs, he took his body apart in order to rediscover it in a new version. He takes the body as the crucial reference of identity and cuts it into Polaroid layers. Ulay launches questions such as “When and why is a body perceived as male or female?”, “What lies between these two distinctions?”, “Where does the “I” stop?”. Without giving answers, he invited the public to think about it.

Ulay was diagnosed with lymphoma in 2011. He did the last performance in January 2019 at the opening of his exhibition at the Richard Saltoun Gallery in London. In the presence of a small group, he lay naked on a sheet of photographic paper, printed, leaving a print of his skinny body.