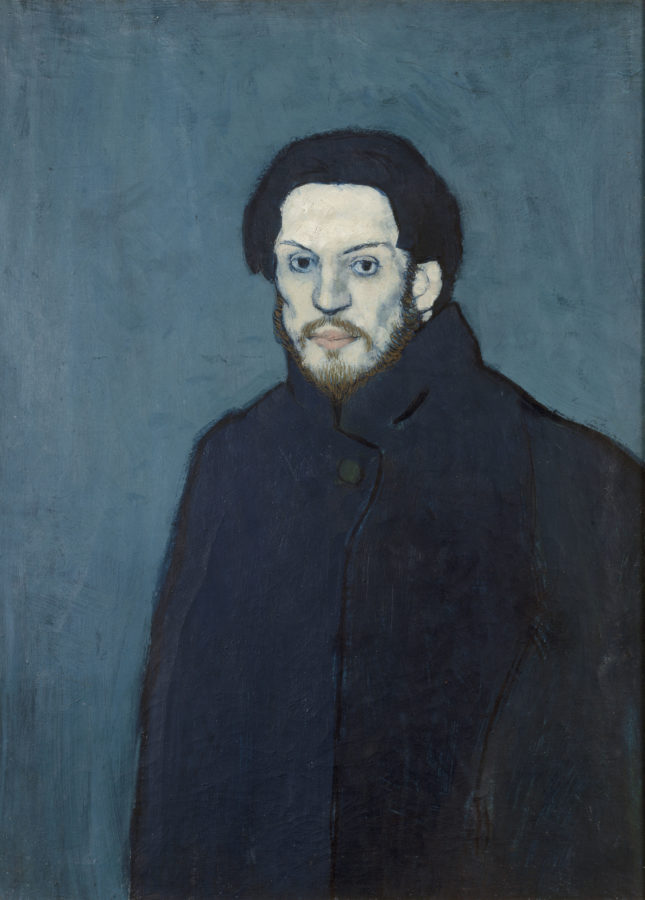 Prior to 1901, Picasso’s subject matter was wide-ranging: urban scenes, contemporary society, religious depictions and, once he came to Paris, the world of the pleasure seekers.  However, it was the death of his friend and fellow artist, Carlos Casagemas that was to turn this colourful, hedonistic world into one of melancholia and isolation and one where he was to turn to a reduced palette of blues and greys inhabited by the destitute, the fallen and the maimed forming what became known as Picasso Blue Period.

Casagemas and Picasso were close friends from Barcelona but while Picasso was a vibrant explorer of the life, Casagemas was depressive and melancholy, perhaps the perfect foil to Picasso and his excesses.

The two men travelled to Paris in October, 1900 to see Picasso’s work, Last Moments, in the Spanish Pavilion at the World’s Fair. Ever the self-publicist, Picasso had announced their departure to the local press.

Once in Paris, the two men quickly established themselves in the hedonistic environment that had sprung up in the hills of Montmartre. By December, Casagemas was already in love with a model by the name of Gabrielle who he constantly bombarded with proposals of marriage.  Disrupting Picasso’s work with his antics, it was decided that they should return to Barcelona for Christmas to give Casagemas time away from his lady love.

At the end of January 1901, Picasso moved in to Madrid where he planned to live for a year while Casagemas returned to Paris,  It was just a few weeks later that Picasso received the news that his friend had attempted to shoot his lover while uttering the words, “so much for you,” but had succeeded in putting a bullet through his temple as he said, “and so much for me!”

The death of Casagemas had a profound effect on Picasso and his artistic output in the coming years.

Picasso returned to Paris after Casagemas’s death and this posthumous portrait shows clearly the wound in the right temple- a detail from the police report that clearly had an impact on the need to memorialise his friend.

Lying, as if in state, the clammy skin tones are illuminated by the light source; a candle, symbolic as the bringer of life: a contrast to Casagemas’s own dark, brooding personality.  A second version of this painting in blue was also created and appeared again in The Funeral of Casagemas.

Self Portrait, Paris Late 1901 – the start of Picasso Blue Period

Aged 20, Picasso looks much older in this portrait; his face is gaunt, his eyes sunken and his beard unkempt.  He looks directly out of the canvas, challenging us to ask him about his experiences.  Wrapped in a large overcoat, he exudes an air of melancholy and isolation.  His use of the blue tones here surround him but they are no comfort in this time of grief and hardship. This portrait was the start of Picasso’s Blue Period and encompasses all that he tried to achieve after this.

Interestingly, the positioning in his self-portrait is mirrored here in the portrait of the old woman with the cataract. Picasso’s life in Paris had brought him into contact with the poor and destitute and this sympathetic portrayal of an old woman shows how Picasso felt there must and should be dignity showed to those who were less fortunate. This Picasso Blue period seems to be perfect for showing society what was lying beneath it.  We can start to see the elongated forms that Picasso had begun to use in this figure and Celestine deeply dark coat is reminiscent of Picasso’s clothing.

Upon Picasso’s return to Barcelona in 1902, Picasso began a piece about ‘a Saint-Lazare whore and a mother’ as he put it in a letter to his friend, Max Jacob.  The two themes clashed frequently for Picasso, and with Casagemas’s death being due to love and also with the tragedy of his mother dying upon hearing the news of her son; it is understandable that he wanted to explore this further.  The final version, along with the title, Two Sisters, would indicate that he had a change of heart and wished to two figures tenderly comforting one another.  The blue tones in this work have a more spiritual feel to them; light illuminates their faces, casting shadows on the wall behind. With the heads covered and feet bare, this has the appearance of a Renaissance religious painting and Picasso captures grief perfectly.  Again, this important work of the blue period allowed Picasso to delve into the very essence of grief and this was something that he would use to create his masterpiece.

Several versions and preparatory works for this and many of the works he had already undertaken led to this final tribute to his friend: La Vie – The Life. If we can compare painting to music, Picasso brought together all the elements of his skill to enrapture the senses.  On the left is Casagemas and Gabrielle clinging onto one another. Skin tones are icy cold and despite the apparent physical closeness, here is a couple who could not be further apart.  The reason for Gabrielle’s refusal to marry Casagemas was partially due to his congenital impotence: he could not offer physical love and this would appear to be the reason for Picasso portraying him semi nude, whilst Gabrielle is naked and downcast.  This is not what she wished for and for Casagemas, who points tenderly to the mother and child, this is not what he wished for either. Between the two pairs, the canvases showing the embracing couple, entwined in a position of pure melancholy.

The heartbreak that Picasso felt at the death of his dear friend manifested itself in an outpouring of blue that resulted in some of the most haunting paintings and the style that would move Picasso on as an artist and allow him to throw his body and soul into his work.