Intersection of Coffee and Creating: Coffee Shops and Their Purpose 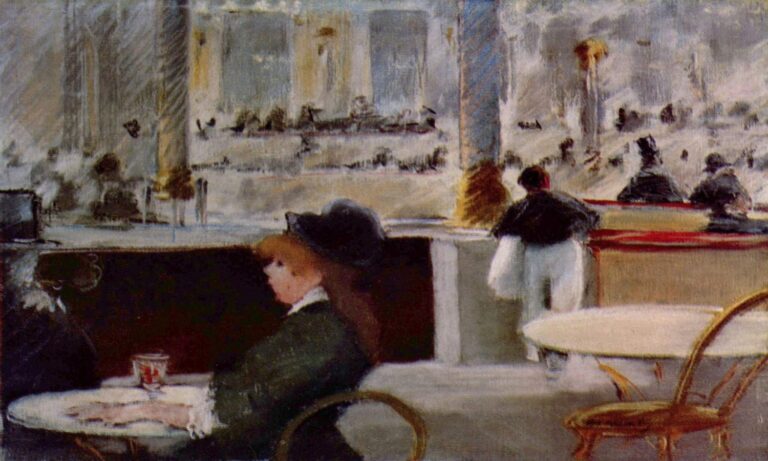 The actual art of coffee making has steadily been growing for years. We have surpassed and moved past instant coffee, onto specialty coffee shops and their frozen and blended coffee drinks, hot chocolates, and sweet recipes, and now have arrived at what is known as third-wave coffee. Much like wine and craft beers, the third wave of coffee seeks to produce high-quality products from a fruit that is picked and used around the world. Past this notion, cafes (or coffee shops) exist as a place that has become a safe haven for artists and intellectuals alike. And this is not a new concept.

Artists have been painting in and about cafes since their emergence into society. The Impressionists, and even the Post-Impressionists, with their penchant for painting life in respectively real and unrealistic manners, portrayed cafes across Europe. Perhaps that is why I have always gravitated toward their style and aesthetic.

Van Gogh’s Cafe Terrace at Night depicts a night-time depiction of a French cafe. Though the streets are fairly empty of people, there is a small number in the scene. Van Gogh’s focus is on the surroundings, much more so than the people. This is not far out of Van Gogh’s style.

Cafes as a Place to Create and Think

As I sit by myself in my favorite local coffee shop, sipping on a hand-crafted latte with house-made syrup and my favorite almond milk, I look around and see that there is most definitely a culture being built around coffee shops and cafes such as this one. Writers, doctors, students, business owners, artists of all sorts, and families flock to places such as this for community and quality food and drinks. Networking happens here. Studying for exams. Engagements and baby showers. Meetings. The opportunities to expand your horizons are endless. Coffee shops and cafes have become a club of sorts where people in communities know they can go to co-exist and mingle with like-minded people over a beer or coffee; as well as a safe place to voice opinions with those who maybe are not as like-minded. Modern coffee shops are similar to salons and cafes in 19th-century Europe in this aspect.

Manet’s The Plum showcases a young woman sitting by herself in a cafe, with a plum in front of her, a cigarette in her hand, and a pensive look on her face. Equal attention is paid to the background as well as her attire and face; though in true Impressionist fashion, the brush strokes are light-handed and edges are blurred with shadow and light.

Because coffee shops such as this one are quickly becoming homes away from home for everyone, it is about experiencing a sense of being… one that is honest, true, and roughly free from the chaos of our everyday lives. The need for a beautiful aesthetic takes precedence, getting just as much attention as the quality construction of coffee and pastries. The building becomes art itself. From the outside murals, exposed brick, large windows that face the street, to the inside mid-century modern furniture that you see right upon entering, coffee shops like this one are almost a necessity in the life of a creative millennial and beyond.

Degas’ use of pensive thought in his 1873 painting, In a Cafe, is almost melancholy. The figures stare off into the distance, their drinks sitting in front of them. But equal attention seems to be paid to every corner of the painting, right down to his signature in the bottom left-hand portion of the scene.

Though coffee shops like the one mentioned above are not intentionally meant to serve the community in such a direct manner, one cannot help but to create the right atmosphere. Monthly “Art Walks” are held in this area for prominent and budding local artists to showcase projects, books, and hand-made wares. This is one business in the area that gives locals a chance to partake in something bigger than themselves through art. Books have been written in this open space. The Nam Within by Leonard Reese. Lovely by Amanda Martinez Beck. Hazel and Howl by H. K. Snyder. I write most of my articles from my “perch” at the counter as well.  There is a comic artist who spends her free time sitting at the counter and brainstorming new ideas for her original characters. ArtParty, an East Texas art zine was conceived in coffee shops around the area.

All this is to say that there is something about coffee shops and cafes that draws creative people into their doors and gives us space where creativity flows. It may not be that much different from the salons and cafes of the 19th century where social lives centered around a common space in a community. While the cafes of 19th-century Paris were not the coffee shops of today, the idea is much the same.

There is a lot happening in this painting by Manet. At first glance, the audience is able to see a man and a woman with beers in front of them. Behind them, a woman stands, hand on her hip and beer pulled to her mouth. And behind her, a dancer stands on the stage. And intermingled among this all, are other cafe patrons. This painting is not necessarily about the patrons, however. Much like Van Gogh’s Cafe Terrace at Night, Manet’s The Cafe Concert focuses on an aesthetic, or a feeling only a cafe is able to produce.