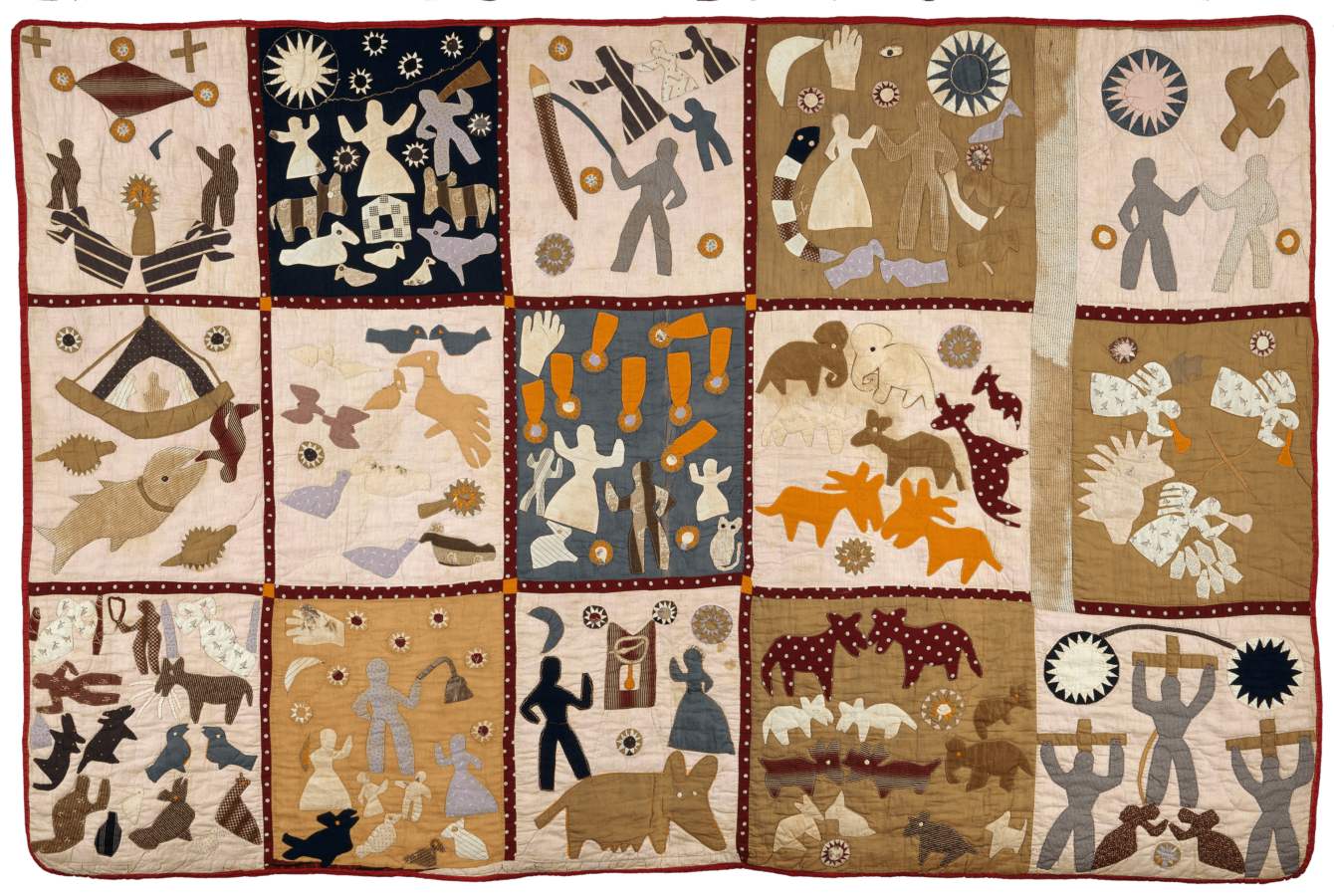 For much of the 20th century, the work of Harriet Powers, an enslaved and later emancipated Black folk artist, remained forgotten. It is especially surprising as experts deservedly consider her one of the most accomplished quilt makers of the 19th century.

Little is known about the private life of Harriet Powers. She was born with slave status in Georgia in 1837. She married young, and once she was emancipated after the Civil War, both she and her husband became landowners. She gave birth to multiple children and spent her life as a housekeeper. Her husband left her and their farm in 1895.

Powers’ strength as an artist lies in what she was able to transmit through the fabric: her religious faith. Powers weaved her spiritualism into her quilts which is easily perceived through the individual blocks depicting biblical stories, local events, and celestial occurrences. Only two of her quilts have been known to survive to this day: the Bible Quilt and the Pictorial Quilt.

Both of these cotton quilts were both hand and machine sewn, using piecework (sewing together pieces of fabric to create a large design) and the technically challenging appliqué method (stitching small pieces of fabric onto a larger fabric). Her quilts were both made post-Civil War, and are unusually rich in their narrative. Many quilts at the time were primarily focused on patterns. Powers, on the contrary, made storytelling a central part of her quilts, using an unusually high number of figures. Beyond the strong narration, the patterns used are similar in style to textiles and the kingdom of Benin, of West Africa. It isn’t known if Powers was in any way aware of those styles, but the parallels are interesting, nonetheless.

At a Cotton Fair: Bible Quilt

Harriet Powers came into the spotlight when her Bible Quilt went on display at the 1886 Cotton Fair in Athens, Georgia. At first glance, the blocks and figures may seem like a random assortment. But upon closer inspection and seeing each block as separate scenes, the quilt becomes a pictorial marvel, almost like a book full of visual scenes. Specifically, biblical visual scenes. All eleven blocks are stories from the Bible, ranging from the creation to the birth of Jesus.

While on display at the fair, a local artist and an art teacher Jennie Smith saw the quilt. She recalled the “quilt-which ‘captured my eye’ and after much difficulty, I found the owner.”

Once found, Smith asked Mrs. Powers if she could buy it. Powers declined. She felt attached to the quilt and didn’t want to sell it at any price. Powers and Smith kept in touch, however, and in five years, both Powers and Smith were in financial difficulties. Powers offered to sell Smith the quilt at a price of ten dollars. Smith countered at five dollars. At that, Powers decided to sell, sadly parting from her beloved quilt. But in a lucky break for art lovers and historians, Powers described each block to Smith, who wrote the descriptions down.

Some of these descriptions include Adam and Eve in the garden of Eden (first block); Satan amidst the seven stars (third block); Jacob’s Ladder, which is also related to a slave song (second row, third block); and the Holy Family (last block). With Powers’ narration, the blocks become the visual representations of the stories. A sense of movement is almost felt even though the figures may look simplified and abstract to our modern eye.

The narration and methodology of the Bible Quilt were evidently unique and admired. How do we know this? Because a group commissioned Powers to create another quilt after the Bible Quilt had once again gone on display. In 1895, the quilt was shown at the Cotton Exposition in Atlanta. A group of Atlanta University faculty women saw and admired the quilt, leading them to commission another from the artist. Powers carefully crafted the quilt, which served as a gift for a retiring trustee of Atlanta University. It departs from the Bible Quilt in a significant way: Powers didn’t limit herself to Bible stories.

There are indeed Biblical narratives, but four of the blocks are real events that happened and are astronomical in nature. She even depicts local events, including something about a rogue hog. And just as with the Bible Quilt, Powers herself provided a brief description for each of the fifteen blocks of the quilt. Here are some of the descriptions, as the artist described them:

“The dark day of May 19, 1780. The seven stars were seen 12 N. in the day. The cattle wall went to bed, chickens to roost and the trumpet was blown. The sun went off to a small spot and then to darkness.”

“Jonah cast over board of the ship and swallowed by a whale. Turtles.”

“The falling of the stars on Nov. 13, 1833. The people were frightened and thought that the end had come. God’s hand staid the stars. The varmints rushed out of their beds.”

And the last block:

“The crucifixion of Christ between the two thieves. The sun went into darkness. Mary and Martha weeping at his feet. The blood and water run from his right side.”

Harriet Powers died in Georgia on the first day of the year of 1910. Her artwork was forgotten for much of the 20th century, and only rediscovered in the 1970s. Which is lucky for us, as both the Bible Quilt and the Pictorial Quilt continue to convey a deep sense of spirituality.

Check out our other articles about quilts and hand embroidery:

Kristin’s a fan of tea, books, and cute animals. She studied art and the environment as an undergrad, and somehow ended up spending most of her time writing.