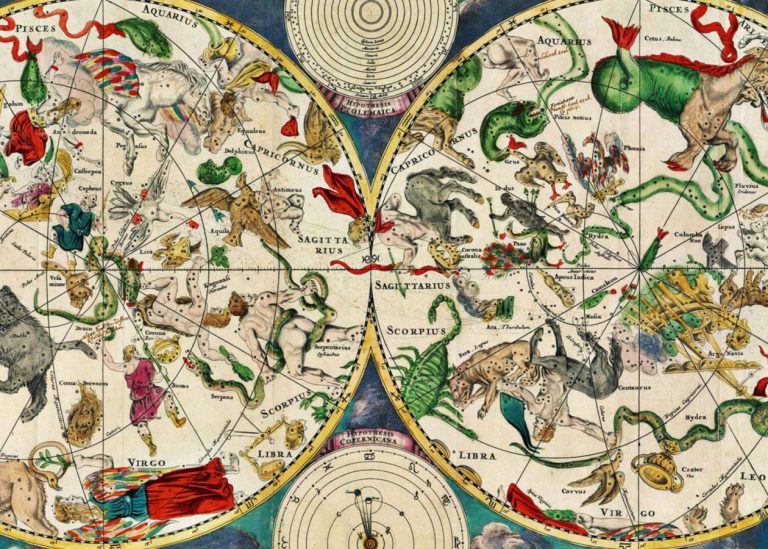 For hundreds of years the sky has been the center of attention for many ancient tribes and cultures. Our history has been a testament to the stars. This curiosity pushed humankind to discover planets, constellations, and many other space phenomena. Besides that, this interest also developed the most sophisticated ways of illustrating the beauty of outer space. Here are the richest ancient astronomical planispheres.

Our ancestors used different techniques to illustrate constellations and stars as science evolved. The astronomical planisphere was the most appreciated and coveted format the past. A planisphere is a kind of circular map which represents either the equatorial or elliptical pole of the sky, accompanied by illustrations of stars, planets, and several constellations. Usually these astronomical illustrations include drawings of mythological creatures, symbols, and even occasional quotes.

Owning a planisphere showed the high social status of the person who owned it. It reflected both knowledge and taste. Although the printing press existed at the time, these planispheres were usually made by hand. The first printed planisphere dates back to 1515, but the richest examples were designed around the 17th century. Nowadays they are still considered antique oddities and treasures.

This marvelous planisphere was made by a Dutch cartographer Frederik de Wit (1629-1706) in the 17th century. The richness of color captures the eye instantly. It comprises all the constellations from the north and south poles, accompanied by magnificent drawings of mythological creatures related to each one. There are also six different tiny maps in circular shapes which add more information to it. Specifically, these maps contain illustrations of the Earth orbiting the Sun and the solar system, with each planet’s name in Latin along with their alchemical symbols. The accuracy of this antique planisphere is superb.

Dating from the year 1856, this planisphere was a creation of Henry Whitall. The entire celestial vault is visible at first sight. In the 19th century people used to have planispheres because observing the dark blue skies, in search of constellations and stars, was a very common activity. That is why the design is so simple, to help the viewer appreciate its content. Looking closely, the constellations are no longer accompanied by illustrations of magical creatures. Therefore it is a very good example of the predecessors to modern planispheres.

This is a very rare planispheric astrolabe, created by Ibn Muhammad Amin Muhammad Mahdi al-Khadim al-Yazdi, dated circa 1659-1660. Astrolabes are more precise and arduous to use than planispheres. This artwork has amazing engravings of the constellations included, as well as some verses in Persian, metaphorically referring to the components of the astrolabe. All together they present an interesting poem. The work on metal is rather sophisticated, demonstrating the artist’s ability and taste. This particular piece is on display in the National Maritime Museum, Greenwich, London.

This rare planisphere was created by Joan Blaeu, astronomy tutor to Joseph Moxon (1627-1691), a very famous printer who specialized in mathematical books and maps. The scenes which decorate the two circular maps stand out at first sight. They represent biblical scenes, such as Genesis, the banishment of Adam and Eve from the Paradise, the tower of Babel, and even the crucifixion. However, it is not common to see all this religious iconography upon scientific tools. It even includes a graphic depiction of God with the word “Yahveh” on it.

The celestial vault represents the north pole, next to a referential north pole earth map. The illustrations of the mythological creatures are intentionally faint though, to allow the viewer to focus on the stars. Instead of the traditional etching technique, which consists of drawing lines on a metal sheet, the author used dots to achieve a transparent effect.

This planisphere was created by cartographer Carel Allard, circa 1700. The information contained here is an example of how science progressed in astronomy. At the time this piece was the most up to date version of the constellations. The cartographer even included two new constellations, Columba and Monoceros, which he discovered and named himself. There is a curiosity in this planisphere though. On the lower left side, there is an illustration of a solar eclipse that occurred on May 12th of 1706. It is a wonderful and fun detail to add to a piece such as this one.  It also has some illustrations of Jupiter and its moons, discovered by Galileo Galilei in 1609 through a telescope. They are named Callisto, Ganymede, Io, and Europa.