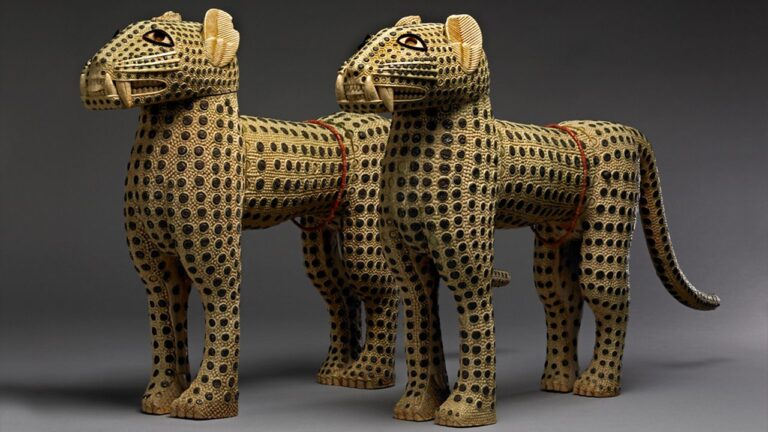 Today we’ll go back in time to the 1500s when the wealth of the Benin Empire (in contemporary Nigeria) was at its peak: when Europeans traded with spices, palm kernels, gum, brass, bronze, ivory, shells, and arms; when art was an instrument of ideology, controlled by the king of Benin and produced solely by the guilds working at the royal court.

Edo people settled in the rainforest area around the 900s, and their chiefs were called “rulers of the sky”- Ogisos. Struggling for power, they created chaos. In response, the king of the neighboring land of Ife sent his son Oranmiyan to restore peace. As such, Oranmiyan’s son Eweka became the first legitimate king of the new kingdom of the Edo people: the new Oba. The people believed Oba to be a descendent from a dynasty of semi-divine beings, directly from the god and creator of the world, Osanbue. They also understood that the Oba didn’t need to sleep or eat, and a person could only approach them kneeling.

Furthermore, Oba’s mother, the Queen Mother, was believed to have had special powers. Thus, the nation and the Oba held them in esteem because they were protectors of the people. The mother, therefore, had her palace with servants and a right to commission cast brass sculptures for her personal use. This tradition required casting their heads in brass. How can we know that a brass head represents the Queen Mother? By her coral-beaded crown, whose peak is usually pointy.

This ivory saltcellar perfectly illustrates the typical style of the Benin court. We have four figures of the Portuguese, two more important gentlemen (bigger and represented frontally), and their two attendants, shown in profile. Hierarchy and status were crucial in the Benin art. The figures of less importance are always small in scale and wear few distinctive clothing. We can notice such a convention in brass plaques which were very common in Benin. This custom was due to a belief that brass drove away evil. They were produced on an enormous scale in the 16th and 17th centuries when the Obas would cover all exterior walls of the royal palace with them.

Animals were of great significance in the belief system of the Edo people. For instance, crocodiles symbolized the god Olokun, the eldest son of the god creator Osanobua: the god of water and wealth; since the ocean was considered a source of prosperity for the kingdom, that benefited from overseas trade with Portugal and other European powers. In this example, the crocodiles may not be visible at first sight. However, these cylindrical bracelets terminate at both ends in elongated crocodile heads. It also served as a metaphor for the powers of the ruler: as vast and unpredictable as an ocean. The ivory leopards from our cover photo were a recurrent motif in royal iconography because they symbolized the court and royal influence. The two figurines were made of five separate ivory tusks each, while their spots were of copper.

Have you ever wondered how European modern artists were inspired by African art? They certainly didn’t travel to the continent. The answer is...