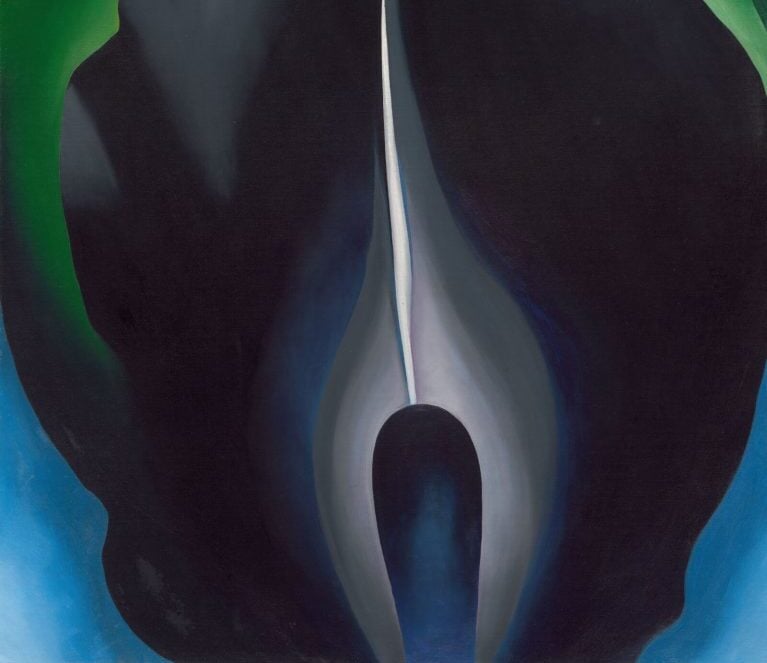 Georgia O’Keeffe is one of the greatest female artists of the early 20th century. She could also be considered the mother of American Modernism. She was a pioneer in reducing subjects to their purest colours and forms to heighten their expressive power. Georgia O’Keeffe’s most famous subjects are her enlarged images of flowers. Jack-in-the-Pulpit No. IV is one of her most famous paintings exploring this floral theme.

Georgia O’Keeffe began painting flowers during the 1920s. She was encouraged and promoted by her husband, the famous photographer Alfred Stieglitz. While Stieglitz’s art-world connections gained O’Keeffe initial artistic exposure, it was through her own talents that gained her long-term recognition as an established artist. Georgia O’Keeffe began painting flowers after admiring some paintings by Henri Fantin-Latour, a 19th-century French painter famous for his floral still lifes. However, instead of simply emulating his style and subjects, Georgia O’Keeffe pushed herself to be bolder in scale and color. Therefore, O’Keeffe created larger scaled images of flowers with a more saturated colour palette.

Jack-in-the-Pulpit No. IV is one of her most famous examples. It captures a close-up lateral view of the interior of a jack-in-the-pulpit or Arisaema triphyllum. The flower is unusual compared to most garden variety flowers because it features a spadix and a spathe. The spadix, or jack, is featured at the bottom centre of Jack-in-the-Pulpit No. IV. A spadix is a type of flower spike covered in small flowers on a stem. In the painting the spadix is reduced to a blackish-blue finger-like form contrasting against a cream background. The spathe of a jack-in-the-pulpit is essentially a hood-like part of the flower. It is informally called a pulpit. The spathe shields the spadix with umbrella-like protection. The underside of the spathe closest to the spadix typically has colors and/or stripes. In Jack-in-the-Pulpit No. IV, O’Keeffe paints the spathe as a deep purple, almost black, in certain areas. It violently contrasts with the creamy center and the surrounding green foliage.

Many previous artists such as Rachel Ruysch, Vincent van Gogh, and Henri Fantin-Latour became famous through their representations of flowers. Their still lifes are equally different from each other through their handling of colours, lines, and shapes; but they are all similar in being marginally life-size and maintaining realistic dimensions. Georgia O’Keeffe explodes the size of her flowers. Her flowers are over life-size. They are massive. Unframed Jack-in-the-Pulpit No. IV measures 102 cm. (40 in.) high and 76 cm. (30 in.) wide. The flowerhead of a large jack-in-the-pulpit can only reach up to 10 cm. in height. This means that O’Keeffe’s Jack-in-the-Pulpit No. IV is 10 times the actual size of the botanical inspiration. Therefore O’Keeffe enlarges her subjects to monumental scale, which allows her to explore the drama, texture, and complexity of the flowers’ forms.

When Georgia O’Keeffe created Jack-in-the-Pulpit No. IV in 1930, she was visiting Lake George in New York state. We can only guess as to the origin of the bright blue background featured in Jack-in-the-Pulpit No. IV. Some art historians theorize it might represent the water of Lake George, while others believe it might be a bright blue sky. Regardless of what the blue background represents, it is clearly featured at the four corners of the painting. It contrasts sharply and vibrantly with the bold purples of the lower canvas, and with the bold greens of the upper canvas. It creates a defined silhouette for the flower, and enhances the bold presence of Jack-in-the-Pulpit No. IV.

Georgia O’Keeffe’s flower paintings have been a source of debate ever since they were created. Many people have said that her flowers represent female sexuality through their visual illusions to female genitals. However, many people refute this Freudian interpretation based upon O’Keeffe’s own opposition to such claims. During her lifetime O’Keeffe repeatedly denied that her flowers had any overt or covert sexual content. She simply wanted to explore the drama of flowers’ structures and focus on their shapes, textures, and rhythms. Will the art world and the general public ever stop looking for genitals in art? Are we that obsessed with sex?