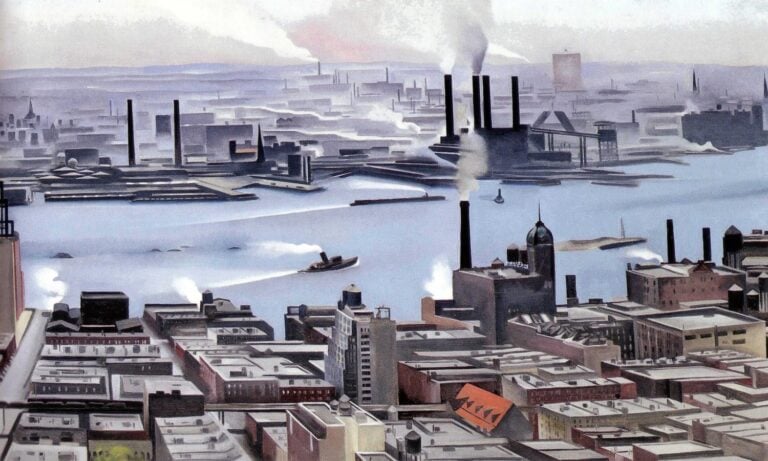 She is definitely best known for her subtle, sometimes almost abstract depictions of flowers and New Mexico landscapes. But there’s also another great chapter in Georgia O’Keeffe’s artistic career that happens to be overseen sometimes – the New York period.

O’Keeffe spent most of her life in a quiet ranch in New Mexican desert, but for a couple of years, she lived in quite opposite neighbourhood, in the very middle of vivid, growing metropolis of New York. She came invited by Alfred Stieglitz, photographer, gallery owner, spiritus movens of New York’s avant-garde scene, and soon-to-be O’Keeffe’s husband. Before she decided New York’s isn’t exactly her cup of tea, she painted several magnificent cityscapes.

She came to New York in an era of growing skyscrapers and they became her main subject in cityscapes. Almost all of them stick to elongated, vertical proportions highlight buildings’ monumental scale.

Some paintings show skyscrapers’ splendor, especially in the night, when they become richly illuminated, almost immaterial towers of light. But the artist also captured Shelton Hotel, in which she herself lived, in a bright daylight, sun glaring from behind its facade. It’s also interesting how she transforms photographic effect, lens flare, into painting in the form of yellow and orange dots.

O’Keeffe was a part of an American movement called Precisionism and although she painted some abstractions she mainly sticked to depicting reality, but in synthesized, sometimes very decorative form.

But New York is not, and definitely wasn’t in those days neither, just Manhattan’s skyline. O’Keeffe not only painted hotel in which she lived itself, but also the view from its window, dominated by factory chimneys.

Despite all the fascination she had for the city, her main interest was not man-made structures, but nature. Even while in New York, she searched for the little patches of sky and clouds high above, between the tops of the skyscrapers. She started traveling to New Mexico. Finally, she decided to live there permanently. Maybe this decision was easier to make regarding reception of her cityscapes. In man-dominated environment, her fellow artists were advising her to stick to the flowers, rather that to paint skyscrapers, which they thought were… a men’s theme.