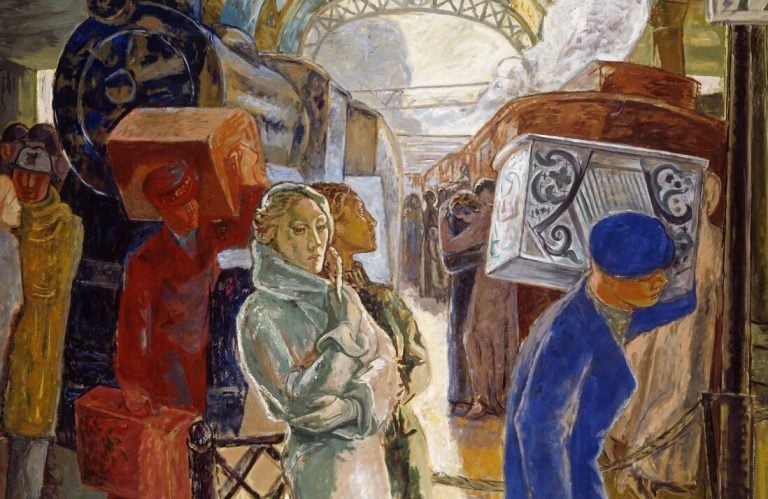 Masterpiece Story: Claude Monet, The Train in the Snow

Steam, breath and sweat combine into a pulsating cloud filling the railway station with energy and anticipation. Everyone is in motion either towards or away from the trains and it is here that journeys begin and journeys end. In reality, the railway station is a hub of untold stories passing along platforms and track lines. We see one such story in Alf Rolfsen’s The Railway Station (Den store stasjon). In this painting, Rolfsen captures a single moment in human experience, exploring hope, desire, peace, and loss. And, in addition, what it means to be human in the modern age.

Alf Rolfsen was a Norwegian painter who captured the vibrancy and intensity of the modern age. His wonderful painting, The Railway Station depicts a large train station, a space filled with three trains and a multitude of figures. Two passengers and two luggage carriers fill the foreground while an embracing couple can be seen in the mid-ground. One of the passengers, a blonde woman in a white fur coat, dominates the foreground with her chic silhouette and calm appearance. She is poised and stylish – a modern woman. Like the railway station, this beautiful woman represents the youth and vigour of a new age. In this painting Rolfsen has embraced progress. Its style reflects both Modernism and Futurism, praising speed, machinery, industry and offering a rejection of the traditional past. It is the machine age.

The woman in white is an enigmatic figure. Is she the prosperous woman of a rising mercantile class, or is she the destitute woman of a falling royalist class? On the other hand, could she be a white countess, a Russian émigré, who has fled her overturned world after the Russian October Revolution of 1917? Indeed, we know that many Russian émigrés fled to Norway and other Scandanavian countries after the bloody coup. This woman could be one of them because she has an aristocratic and sad look befitting such a glamorous past. Our white countess must be important to the narrative of The Railway Station because she is in the left center of the composition; she is prominent and striking.

Flanking the white countess in The Railway Station are two porters carrying luggage. Could they be carrying all her worldly goods? Perhaps like a gypsy she travels with everything she owns. We can see that the cases are heavy in the slouching and straining back of the porter in blue. He, like his co-worker in red, is painted boldly, in a limited spectrum of colour. Like the white countess, both porters are almost symbolic of something beyond their mortal form. Perhaps they represent the labouring class, the backbone of empires and industry. They certainly add a visual contrast to the erect and relaxed white countess.

Behind the luggage of the blue porter we see a couple embracing in a final goodbye. Someone is about to leave and board the departing train to their right. The woman rests her forehead on the man’s shoulder and wraps her arms around him while the man rests his face into the curve of her neck. Their bodies mold together and their embrace has the intensity of parting lovers. There is deep affection in their embrace. They, like the porters, add a visual contrast to the white countess. The Railway Station presents shows us a companion beside the countess. But this couple coolly look away from each other. There is not the same dramatic display of affection as seen in the couple in the mid-ground. Indeed, the two couples are foils of each other.

Surrounding the many figures of The Railway Station is the machinery and architecture of the modern era. In the upper right corner we see a clock announcing the time as 17,35 or 5:35 pm. Like the social patterns seen on roads, this is rush hour. People are leaving work and returning home by train. There is a sense of jostling, shown in the crowd on the far left edge of the painting. At the same time, passengers crowd together as they hurry to catch the next train. But not the white countess. In contrast, she walks placidly across the scene.

Three trains dominate the left and right sides of The Railway Station. Their black and brown metallic bodies shine in the steamy sunlight. In addition, their bodies recede into the middle of the frame creating a sense of depth and perspective. These trains evoke the mystery and glamour of the 1930’s. This is the world of Agatha Christie’s Murder on the Orient Express with the famous Belgian detective, Hercule Poirot. In fact, Christie’s 1934 novel features a Russian émigré, the Princess Dragomiroff. However, Christie’s princess is described as elderly with a yellow toad-like face. Clearly, the white countess of The Railway Station is the beauty of the two émigrés.

Elements of strong lines, bold shapes, and pure colors make Alf Rolfsen’s The Railway Station an interesting painting to view and speculate over. They divide the composition into smaller areas of focus while also linking other elements together. For example, the iron girders of the station’s ceiling form a visual bridge over the left and right platform. Also, the red of the left porter echoes the red of the right train. Creamy shades of color are found throughout the composition. We seen them in the fur coat of the countess, the steam of the trains, and the highlights of the luggage. In contrast, colour is also used to isolate people in a large crowd. Complimentary and contrasting color schemes add visual interest throughout the painting’s composition.

The Railway Station can be seen in the Nasjonalmuseet of Oslo, Norway. It is a Norwegian jewel of 1930’s modernism. Alf Rolfsen has indeed created a masterpiece.