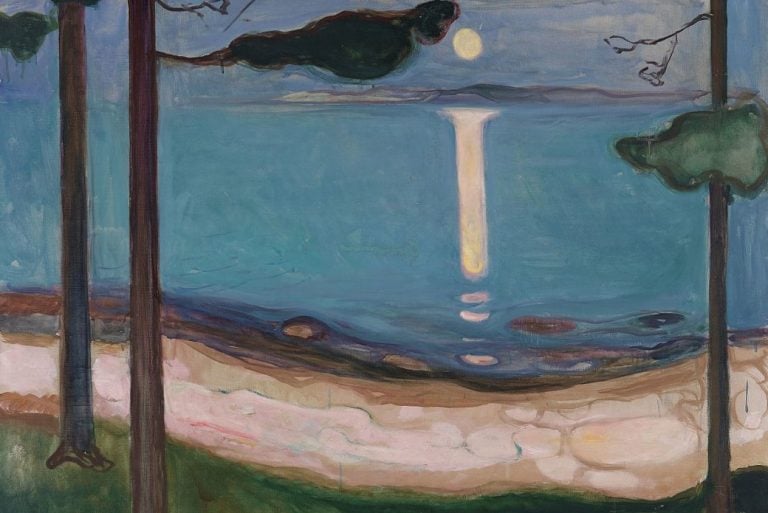 The Night Sky: 10 Nocturnal Paintings You Will Love

Have you ever seen a full moon? Let’s take a look at some wonderful artists who have featured our celestial companion in a variety of settings across the ages. Our title image is by Edvard Munch; the undulating coastline forms a counter-point to the strict vertical lines of the trees and the column of reflected moonlight. There are no people here – this painting is very much about mood and feeling.

J. M. W. Turner takes a very different approach. Here we see a stormy sea, lit by moonlight, the tiny human figures with their meager lantern very much at the mercy of nature. This was the first oil painting that Turner exhibited at the Royal Academy, fueling a vogue for nocturnal paintings.

Turning back to a more serene yet mysterious scene, we see a sleeping woman, visited by a lion, who chooses not to harm her. Henri Rousseau was mostly a self-taught painter, but his simple lines and fantastic imagery were immensely popular.

But where is Van Gogh, I hear you ask? Well yes, he must surely appear in any list of moonlit paintings, his most famous perhaps being Starry Night. But that actually features a crescent moon, so sticking with our full moon theme, we see instead this painting of a full moon rising over a wheat field. Scientists have actually been able to pinpoint the exact time this particular moon rose over that field: 9:08 pm on 13th July 1889!

Vincent van Gogh (and many other Western artists) studied and reproduced the prints of Japanese artist Andō Hiroshige, who was considered the last great master of the ukiyo-e tradition. So let us end with his image, featuring a waterfall falling in front of a magnificent moon.