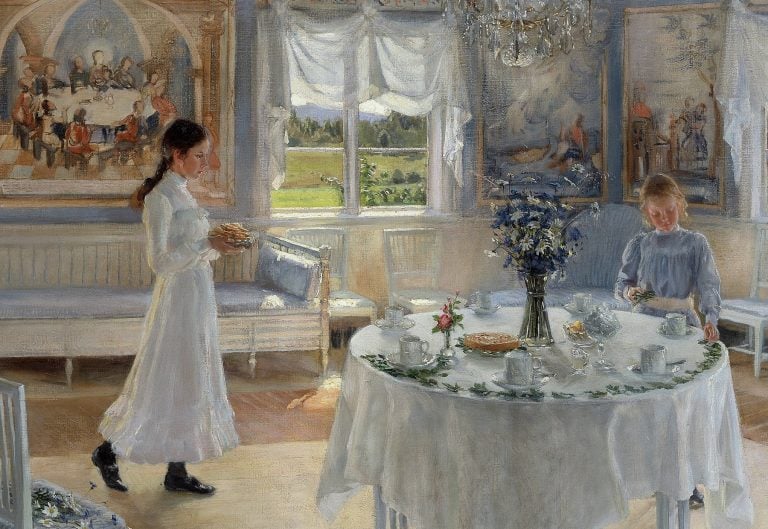 Fanny Brate was born in Stockholm in 1861. Showing great potential from a young age, she started taking drawing and painting classes when she was only ten years old. In 1885, at the age of 24, she received a Royal Medal for her painting Art Friends. Her visits to Paris heavily influenced her style of painting. However, in terms of subjects, she always turned to her local community. Her genre paintings in Impressionist style portray the everyday life of children over the 19th and 20th centuries.

Fanny Ingeborg Matilda Brate was a Swedish painter. She was born and raised in a palace since her father was a clerk in the household of King Oscar II. Therefore, from birth, she was exposed to the finest examples of art in different mediums surrounding her.

Artist in the Making

She studied at an all-girls school between 1868 and 1877. While studying, she was taking part-time painting classes at the Arts and Crafts School. Later on she became a full-time student there, until she began painting under the supervision of master Malmström at the Royal Swedish Academy of Fine Arts. In 1885, she received recognition when she was awarded a Royal Medal for her painting Art Friends.

In 1887, she went to Paris and studied for a term at an art school founded by the Italian sculptor Filippo Colarossi. A travel scholarship from the Royal Academy also helped her to attend. During her time in Paris, she visited many Impressionist exhibitions. Her later paintings show a direct influence on her time spent abroad. She continued to make study trips throughout Europe, including a visit to the Universal Exposition in 1889.

Although she painted many scenes featuring children in daily, outdoor activities, Fanny Brate became best known for her domestic interiors. For example, A Day of Celebration is her most widely recognized work and has been reproduced many times. It is on display at the National Museum in Stockholm, it depicts preparations for a name’s day party in a large room at the Brate family’s estate. The painting, like many others, is bathed in sunlight. It reflects an idealized view of life, both in the countryside and at home.