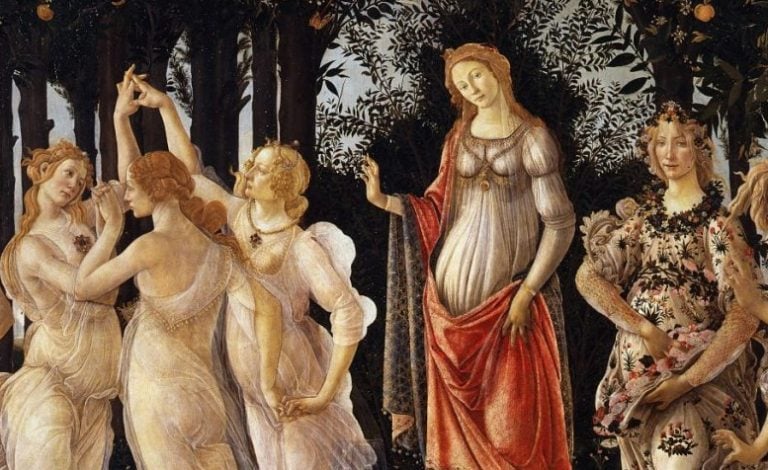 La Primavera, which means “Spring” in Italian, is without a doubt the most famous painting of Sandro Botticelli. Its mysterious allure continues to dazzle audiences and baffle art historians to this day. Originally, the painting was commissioned by Lorenzo di Pierfrancesco de Medici, probably on the occasion of his marriage.

Who Were the Medici

Florence in the late 15th century was a great Italian arts center and had a booming economy as well. The Medici, a family of bankers, ruled the city. Their bank was the most powerful one in Europe, even having amongst the clientele the pope himself. They rose to power in 1434 with Cosimo and, with some ups and downs, maintained it until 1737. Cosimo worked to bring peace to Northern Italy and consequently brought stability and a great influence for his family over the city.

However, both the family and the city reached their apogee during Lorenzo the Magnificent’s rule, Cosimo’s grandson.

Along with the Vatican, Lorenzo was one of the main patrons of the arts during the Renaissance. He commissioned works by Michelangelo, Leonardo da Vinci, and of course Sandro Botticelli.

In La Primavera, the action takes place in a lush garden. Venus stands in the center, above her, Cupid is ready to release one of his arrows. To her right, first, we see Mercury, the guardian of the garden, sending away the dark clouds from the area. His sword, in a prominent position, enhances that role. Next to him, the three Graces dance in a circle.

To the left of Venus, however, lies the most mysterious part of the painting. At the edge of the canvas, there is a young man with blue skin. He is Zephyr, the western wind chasing the nymph Chloris. Next to the nymph, another female figure scatters rose petals all over the garden. She is Flora, the personification of Spring. How are all these figures connected?

The answer probably lies in literature. In Ovid’s Fasti, an epic poem in six volumes, the poet explains the origins of the months of the Roman calendar. In the part devoted to May, we learn that Chloris was attacked by Zephyr. Later, he regretted his actions and turned Chloris into Flora and gave her a garden where there would always be Spring. An element on the canvas that supports this theory is, for example, the fact that the two women do not seem to acknowledge each other. Additionally, the flowers that come out of Chloris’s mouth land on Flora’s dress. On that part of the painting there are 500 different species of plants, carefully and realistically rendered. 190 of them are flowers.

The two groups on the left and right of Venus come together through the ideas of Neoplatonism, a philosophical theory, popular at the time in Florence and the close circle of the Medici court. Neoplatonism connects Plato’s philosophy with Christian morals. The theory advocates that there are two kinds of love: carnal desire, represented in the painting by Zephyr, and the pure desire to connect with god, represented by the Graces.

Sandro Botticelli gave us a masterpiece for the ages. A painting about love in all its forms but also the promise that Spring will always come, no matter how hard the Winter is.