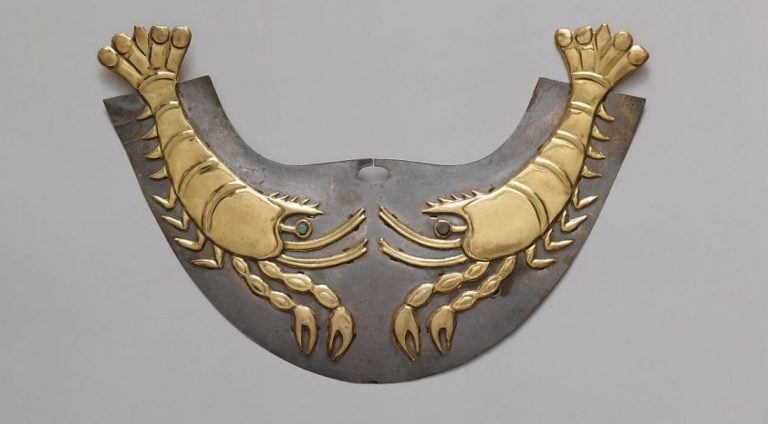 The Moche were an ancient, indigenous people of Andean Peru. They are considered to be one of the most influential civilizations of the ancient Americas. Through their art, they conveyed the stories of their people and their beliefs. Fortunately, they left behind an abundance of sophisticated, artistic artifacts to help us better understand their mysterious culture.

The Moche or Mochica civilization flourished from 100 until circa 800 CE. Their territory spanned the Northern coast of present-day Peru in South America. Their society consisted of fishermen, weavers, farmers, potters and artisans. In addition there were many slaves, servants, warrior-priests and priestesses. The Moche were a non-literate people who used their art as a means of communication.

Artists of the Moche culture depicted narratives scenes on ceramic vessels. In addition they painted murals expressing their daily life, religious beliefs and mythologies. They were also great innovators. For example, they built very successful irrigation systems. These transformed their dry, desert landscape into lush and fertile agricultural farmland. They also constructed huacas. These were spectacular pyramid-like structures made from adobe bricks. The Moche used them for rituals, palaces, administrative purposes and royal burials.

Themes and Iconography in Moche Art

The Moche portrayed a diverse range of themes and icons in their art. Animals were of great importance and often featured in their ceramics and jewelry. Owls, bats, felines, crabs and other marine creatures were particularly popular. The Moche people believed that owls were powerful creatures who saw through the darkness of death. They also acted as guardians on the journey to the next life. Bats also symbolized death and renewal.

The Moche included scenes with figures and animals from the natural and supernatural worlds. One important deity in Moche art was Ai Apaec, the creator and sky god. He was usually shown with an anthropomorphic face and feline fangs. Another was the Decapitator, god of darkness. He was usually depicted as half man, half jaguar. The most powerful, however, was Si, the moon goddess. Other popular ceramic effigy figures included musicians, priestesses and captives.

The Moche culture is recognized for its fascinating, decorative ceramic vessels. These took the shape of humans, animals and vegetables or plants. Such shapes reflected the most important aspects of Moche culture. Moche potters created thousands of ceramics for everyday, domestic use. They also made others exclusively for the elite and funerary purposes. In fact, certain ceramics are directly connected to sacred religious ceremonies. A good example of such ceramics are the portrait vessels.

The early ceramics of the Moche people were sculptural. They depicted humans, supernatural deities, plants and animals. In fact, some of their portrait vessels were life-sized. They also included very realistic depictions of actual people, primarily leaders or nobility. Later ceramic vessels displayed complex line drawings and the innovative stirrup spout. Evidently, Moche potters often used molds to produce their ceramics. We know this because archaeologists discovered several duplicates at grave sites. Other examples were found in domestic areas.

Moche artisans used a limited palette of earth tones to decorate their ceramics. The primary colors they used were cream, red-brown or red-orange and black. Their ceramics were painted in slip which they created from a mixture of clay and water. The walls of the vessels were of particular note, being incredibly thin.

The Moche people were phenomenal metallurgists. In fact, they were pioneers in gilding and soldering metal techniques. They created a wide range of decorative, ceremonial objects, tools, weapons and jewelry. Many of these were cast in gold, silver and copper. In addition, they incorporated semiprecious stones and spondylus shells (spiny scallops) into their designs.

Moche artisans created decorative objects to adorn the body. Such objects included necklaces, nose ornaments, earrings, bracelets and headdresses. Many of these elaborate ornaments were discovered in royal tombs of the Moche elite. Also found there were several tumi knives. The tumi knife was a popular ritual object in Moche culture. It was usually created in metal and had a half crescent shaped blade. Sometimes the maker decorated the handle with a figure or animal. Some scholars believe that tumi knives were used in special ceremonies that involved human sacrifice.

Murals were painted on interiors and exteriors of religious temples and residences. They created the paint for these murals from mineral pigments such as iron oxides and natural clays. Several paintings have been discovered at important Moche cultural sites. Amongst the more famous are Panamarca, Huaca de la Luna (Temple of the Moon) and Huaca del Sol (Temple of the Sun).

For Moche weavers, the primary raw material was cotton. However, skilled weavers also wove textiles from vicuna or alpaca wool. The weavers also created complex designs and patterns for garments and accessories. However, very few Moche textiles survive today. Those that have been recovered were preserved in Moche funerary chambers.

Where to See Moche Art Today

The Moche culture mysteriously disappeared. Some archaeologists believe the Moche’s demise was linked to climate change. Others think that they might have fled their land before being defeated. However, we are able to experience and learn about the Moche today through their incredible artworks that have survived centuries. Moche art objects can be found in several museums. Others reside in private collections throughout the world. Some of the largest collections are at Museo Larco in Lima, Peru and The Metropolitan Museum of Art in New York. Another is at The Harvard Peabody Museum of Archaeology and Ethnology in Cambridge, Massachusetts.