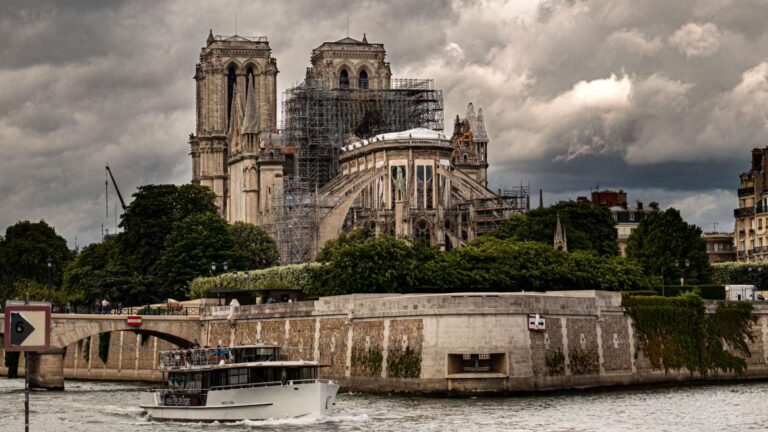 On April 15, 2019, the world watched in horror as fire swept through the famous cathedral of Notre-Dame de Paris. For several heartbreaking hours, it seemed likely that this beloved church would be destroyed. In the end, the damage included the loss of the 19th-century spire, lead roof, medieval wooden attic, and a section of the vault. Notre-Dame de Paris was wounded but largely spared, as the main body of the church remained mostly intact. Efforts to limit the damage and stabilize the building began almost immediately, while donations towards the Notre-Dame de Paris restoration poured in from all around the world.

The first few weeks after the fire saw almost daily media coverage. More recently, we have only received the occasional, breathless reports that the building may still collapse. On the one-year anniversary of the devastating fire, this article explores Notre-Dame's current state.

If you need to refresh your memory on the cathedral's condition just after the fire, click here.

According to a March 2020 email newsletter sent by the Friends of Notre-Dame de Paris, the work done in 2019 focused on stabilizing the cathedral to prevent further damage. This included covering the roof with giant tarps to block wind and rain (the very first order of business), removing fragile elements like statues and stained glass for their protection, and clearing up the water left by firefighters' hoses. Nets now hang on both the interior and exterior to catch any additional falling debris. New scaffolding allows crews to access all areas of the building. Workers have also created wooden supports for each of the cathedral's many flying buttresses and for the gables which are vulnerable without the roof behind them.

Dealing with all the debris and fallen pieces of architecture has been another big part of the efforts so far. Because every scrap of charred wood and fallen stone will provide clues to Notre-Dame's past and inform its future, each piece must be carefully cataloged. Thanks to this debris, scientists will be able to understand Notre-Dame de Paris and its construction better than ever before, enabling more informed decisions about the reconstruction. Therefore, this evidence has been handled with the greatest care. Meanwhile, many surviving artefacts are now on display at the Louvre.

There has also been the critical work of cleaning up the many tons of toxic lead that the roof and spire produced during the fire. Over the summer, there were concerns that the lead levels in the air were too high, thus posing a risk to everyone living and working in the area. As a result, the restoration work was shut down for a brief time. According to ArtNet News, crews have used many strategies, including power washing, to remove the lead. However, French authorities are not yet certain that it's all gone. In early February, there was talk of using a new, resin-based technique. This would capture the most stubborn lead particles that have worked their way into the very fabric of the building. Satisfactory lead reduction is the main obstacle preventing the re-opening of Notre-Dame's plaza to the public.

Sadly Notre-Dame de Paris is still very fragile. Back in October, Notre-Dame's chief architect Philippe Villeneuve emphasized that "the state of the vaults remains worrisome" six months after the fire. This is in part because of the sizable hole in the vaults created when the spire crashed down, and because of the fire itself. Extreme heat isn't good for stone and mortar, so the vaults' long-term stability may have been compromised.

It's too soon to tell if the vaults are strong enough to stay up. But in case they collapse, a series of wooden supports (shown above) against the flying buttresses aim to prevent the rest of the building from caving in. When the building was whole, the inward force of the buttresses counterbalanced the outward force of the vaults. So if the vaults collapse, the unopposed inward pressure of the buttresses would topple the walls. Fortunately, Friends of Notre-Dame de Paris reports that the sensors monitoring the vaults have shown them to hold steady over the past year.

The other continuing threat to Notre-Dame de Paris is the presence of a 250-ton metal scaffolding system. It was installed around the spire for the restorations underway at the time of the fire. This scaffolding melted during the fire and all the pieces welded together. But getting rid of it will be a challenge. The plan is to build a second scaffolding around it from which workers can rappel down and remove the melted scaffolding bit by bit. Its great weight puts pressure on top of the weakened vaults and it could collapse, particularly in high winds. However, the situation could have been much worse. Villeneuve tells us that because this scaffolding is self-supporting (it doesn't rely on Notre-Dame itself for support), it saved the church from even greater destruction when the spire and roof gave way.

The presence of the old scaffolding led to sensational headlines in late December. Notre-Dame's Monsignor Patrick Chauvet was quoted as saying that there was "a fifty percent chance" that the vaults would still collapse. It's unclear where that figure came from or whether it has merit, as official sources have not cited it. Quotes from people closely involved in the restoration, like Villeneuve and General Jean-Louis Georgelin, have been cautious but not as bleak. However, it's clear that truly assessing Notre-Dame de Paris's structural integrity will not be possible until the scaffolding has successfully been removed. Removal was scheduled to begin in February 2020. No work has taken place on the Notre-Dame de Paris restoration, however, since the French government-mandated lockdown for Coronavirus began in mid-March.

Even if we are rather confident and even if all the indicators seem positive, it is still too early to affirm that the cathedral is saved.

Many questions remain about Notre-Dame's future, specifically what form its reconstructed elements will take. How the spire and roof will be realised has sparked a lot of debate in the media. But in reality, it will be quite some time until these issues become truly relevant. French President Emmanuel Macron has promised complete restoration in time for the 2024 Paris Summer Olympics. But at this point, it seems unlikely. France still has more time to decide (and debate) how to put one of its greatest national monument back together. In the meantime, I would like to take a moment to celebrate the fact that Notre-Dame de Paris is still standing, fragile though it is, one year after we nearly lost it forever.

I want to give a shout-out to Tim Brown and his Restoring Notre Dame blog. His compilation of English-language news coverage about the Notre-Dame de Paris restoration was a big help to me in researching this article.