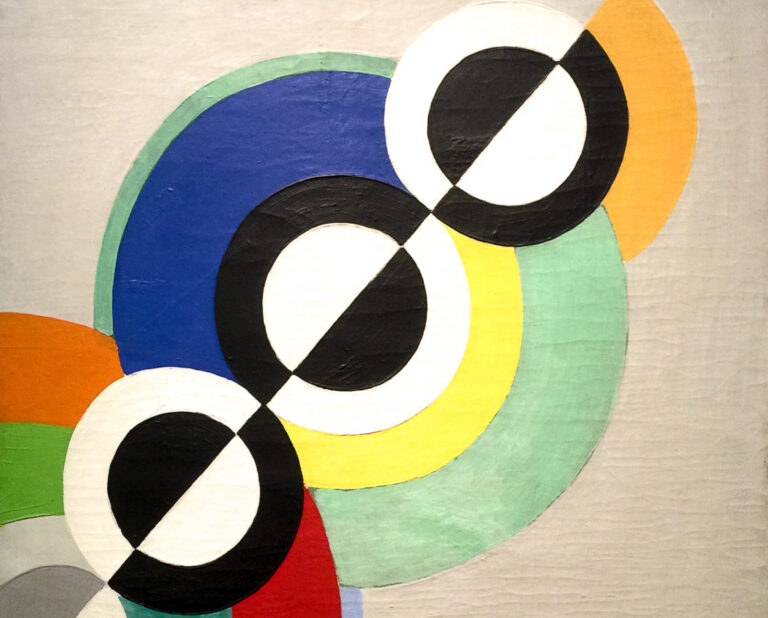 The picture was inspired by the round shapes that marked the return of the artist to orphism and study of harmony in painting. For Delaunay, modernity is defined by its excessiveness. Under the effects of urban novelties from the gigantism of the Eiffel Tower to the impact of billboards, through the electrification of streets and the rise of aviation, he saw this modernity as a visual overflow, a optical sensation that submerges the viewer, glaring and dazzling.

This quest for “pure painting”, which puts the eye of the viewer in direct contact with the agitation of the real, merges with a test of the medium of the easel painting. From his first Landscape to the first circular forms painted in 1913, Delaunay, inspired by astral theories as well as by the movement of the propellers and halos of electric lamps, sought to overcome the limits imposed by the format of the canvas by integrating a gyratory dynamic into his compositions. Because it acts directly on the sensitivity of the viewer, this painting was a “popular aspect” for Delaunay. One understands his desire to abandon the easel and leave the workshop: should not we see the simultaneous painting everywhere, in the street, in the shops, in the theater, in the cinema, in the apartments and on the buildings?

Following his first experiences with the filmmaker Abel Gance in 1913, and the projects imagined with Russian ballets in Spain in 1918, it was in Paris, where Robert and his wife Sonia, also a successful artist, settled in 1921. Delaunay became more interested in applied arts, and started designing advertising posters. Ranging from the promotion of aperitif brands or cars, to public events, these projects allowed him to combine his circular shapes, propellers and discs, with the urban environment. Painters, disenchanted by their solitary and solipsistic practice, sought to participate actively in shaping urban modernity. For this, the best way seemed to them the integration of their art into architecture. It is therefore not surprising that in 1925, architect Robert Mallet-Stevens appealed to Delaunay to decorate the lobby of a fictitious French Embassy presented at the Exposition des Arts Décoratifs. In a vast clear and open space, Delaunay installed a new version, vertical and narrow, of The City of Paris, large ambitious paintings designed for the Salon des Indépendants of 1912. This participation allowed Delaunay, for the first time, to integrate his painting in a contemporary architectural context and to test the impact of his compositions on a monumental scale.

The year 1930 marked a turning point, as Delaunay definitively abandoned figurative painting, especially the making of portraits of his friends practiced since his return to France. He returns to his pre-war circular forms to remove any figurative referent. His painting Rythmes shows bright colors and marks the transition to the more radical production of his last years. The contrast between black and white tones structures the sinusoidal movement that animates the surfaces. According to the artist, these works could “marry intimately with architecture, while being architecturally constructed in themselves”. Instead of intervening on a surface, they respect the plane of the wall and resume the spatial arrangement, as if they prolonged the experience of the ambulation.

A recovering lawyer in Birmingham, Alabama, USA, who got a job working with octopuses at a lab in Naples, Italy during college. He spent the weekends looking at Renaissance art all over Italy, took an art class when he got back to school, and remains amazed and awed by human imagination, creativity and ingenuity.