Masterpiece Story: The Courtesan Hinaaya of the Chōji House by Kikukawa Eizan 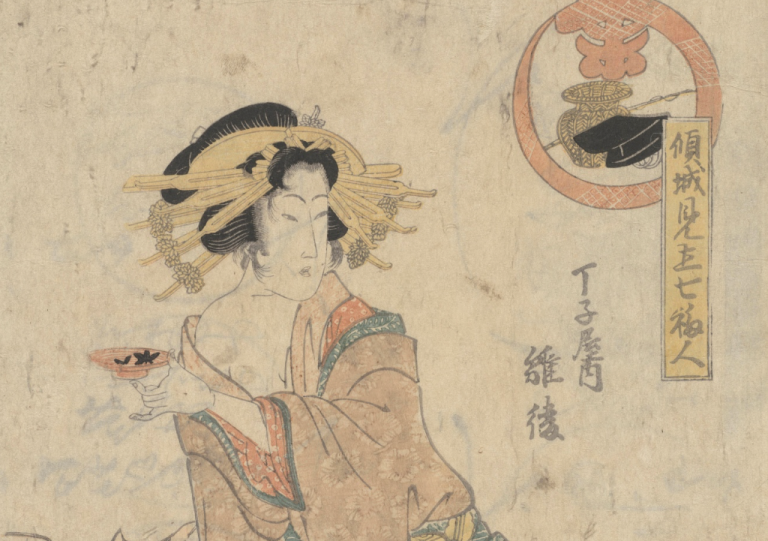 The Courtesan Hinaaya of the Chōji House by Kikukawa Eizan, is one of the woodblock prints from Vincent and Theo van Gogh’s collection in the Van Gogh Museum in Amsterdam. The close-knit brothers, extensively collected Japanese ukiyo-e prints. The Courtesan Hinaaya belongs to the series of Courtesans Representing the Seven Gods of Luck.

In the mid-19th century, Paris had already been swept by the tantalizing vogue of Japonisme which is defined as the fascination with artifacts and accessories from Japan, was coined by Philippe Burty in 1872. Furthermore, the extent of its influence was so great that it started a new culture of Japanese prints. Almost everyone collected French prints and was proud to possess them.

The Courtesan Hinaaya of the Choji House depicts a female courtesan showing her cleavage, and presumably holding a ceramic cup of tea. The woman is kneeling and leaning towards a table, while she stares to the side. Her hand rests on the table, alongside a bowl of fish. The composition of the print has a diagonal alignment.

The hairpiece, kimono, stylized contours, and calligraphic elements were persistent themes in Japanese prints for centuries. Moreover, the kimono does not appear to be flamboyant and ornate. Thus (according to the ranking system of pleasure quarters) we can deduce that this courtesan belongs to the lower stratum. To put it simply, she is a low-ranking sex worker. The teenage and low-ranking courtesans had to follow the commands of the higher-ranked ones. Besides, they trained them in refined arts, etiquette, and other virtues.

In reality, the high-ranking courtesans and low-ranking prostitutes all suffered from venereal disease and the hardships of bearing unwanted children. The courtesans in particular wore toxic lead makeup to whiten their faces, necks, hands, and feet. Many prostitutes died by age 20.

The Culture of Courtesans in the Edo Period of Japan

In the 8th century, women in Japan served as emperors and managed the nation. However, with the passing of time, the status of women declined up to the Edo period (1603–1868). They were subjugated and only permitted to perform domestic chores. The Tokugawa shogunate of the Edo period imposed the tenets of Confucius. Also, to deliver a vent for the sexual pursuits of men which were deeply entrenched at the time, the shogun amended the provision of specific neighborhood regions known as pleasure quarters. These pleasure quarters contributed considerably to the revenue of the autocratic government.

Farmers and workers who could not afford to feed their families sold their daughters to these quarters. Moreover, the quarters imposed massive debts on the courtesans. Although these women lived in undesirable conditions, the senior residents made them learn soft skills and hone their talents. This elite capability would suit the visiting daimyos (feudal lords), samurais, and rich landlords. Also, this practice leveled them in drawing the clientele in with titillating conversations. The hierarchy within pleasure quarters was ruthless. Consequently, the most senior courtesan had spacious rooms and flaunted expensive, multi-layered kimonos.

Yoshiwara, Shinomachi, Shimbara, Choji, among others, were various pleasure quarters in which artists were appointed to produce beautiful woodblock prints of prostitutes. These woodblock prints not only made money but also served as a medium to run these lucrative pimp businesses.

In the medieval period, Japanese Buddhist traditions, particularly among the lower classes, embraced casual sex and promiscuity. Even the myth of Japan’s creation involved two gods making love, which became part of the justification for selling girls into prostitution. Male promiscuity often extended to sex with other men, which was considered normal.

In this print, the courtesan represents the Seven Gods of Luck. According to Japanese mythology, seven gods of luck bring immense wealth, longevity, fortune, prosperity, and abundance. The seven gods of luck, namely are Ebisu, Hotei, Benzaiten, Bishamonten, Daikokuten, Jurōjin, and Fukurokuju. There are many studies that compare their similarities with the Chinese and Indian gods. However, a courtesan in a godly representation gives one the idea of giving a guilt-free and sacred status to the pleasure quarters. It was therefore a way to morally elevate the promiscuity prevalent in that era. To an extent, a few prints also depict an anthropomorphic image of Buddha with courtesans in the Edo period.

Vincent van Gogh collected numerous ukiyo-e prints to inspire as well as refine the compositional features for his Impressionist paintings. He would pin them to the wall of his home in Antwerp. One of his paintings, Bridge in the Rain, obviously replicates the print, Sudden Shower over Shin-Ohashi Bridge and Atake designed by Utagawa Hiroshige.

Van Gogh based this painting on a woodcut by the Japanese artist Kesai Eisen. The print was reproduced on the cover of the magazine Paris illustré in 1886. Van Gogh used a grid to copy and enlarge the Japanese figure. He used bright colors and bold outlines as if it were a woodcut.