The Best Time of the Year: Christmas in Art 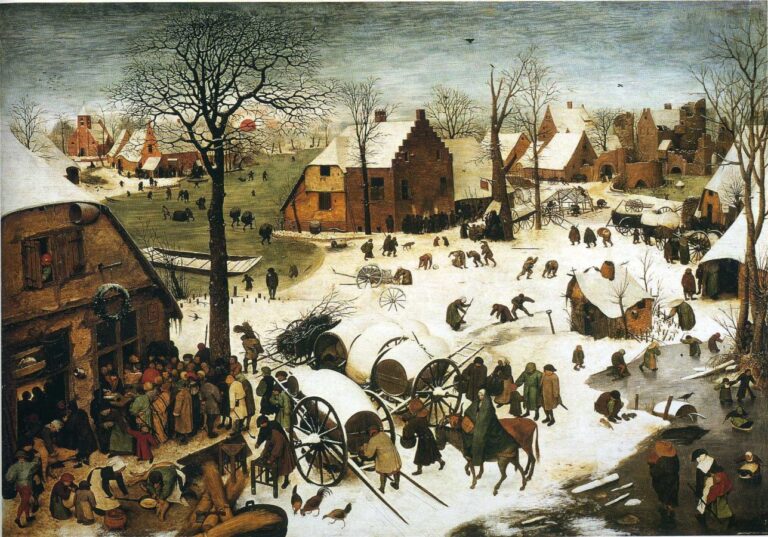 To many of us, the Christian religious and cultural celebration called Christmas is surely one of our favorite times of the year. Burl Ives famously sang “Have a holly, jolly Christmas… It’s the best time of the year…” So, let’s sum up these jolly holidays and look again at what Christmas in art looks like.

One of the best ways to do this is to look at some beautiful pieces of art. Which things remind you of Christmas the most? If it happens to be angels, snow, and the Christmas spirit – that’s what we can find in the paintings shown below.

Did you know that during the Middle Ages, King Richard II of England organized a Christmas celebration, at which in 1377, three hundred sheep were eaten? It seems that not much has changed since then!

Pieter Bruegel, The Census at Bethlehem

A Flemish village covered in snow is one of the first paintings from Western art to present a snowy landscape. Bruegel depicted the scene out of his local, daily life on a cold winter’s day, adding only Joseph and the pregnant Virgin Mary on a donkey. The scene is described in Luke 2, 1-5.

This beautiful piece is a transition from the late Gothic style into the Renaissance due to the stylistic transformations between those periods. We can see a complex use of light and perspective, but still the rendering of objects is quite stiff and decorative. The delicate and innocent Mary is presented in an outdoor environment receiving a blessing from Gabriel. What was novel about Fra Angelico was that he depicted the figures in an outdoor setting.

Federico Barocci was an Italian painter active in the Renaissance, considered to have been one of the best painters of his times. In this picture we see Mary kneeling before God. There is an indication of a strong bond between the mother and her child.

This one is a great example of an honest joy. The people in the illustration look so jolly… And that’s what Christmas should be about – laughter, joy, and happiness. Norman Rockwell asked his relatives and friends to pose for this piece to make it look more realistic. We can all imagine the joy of seeing our loved ones during Christmas time.

This Impressionist painting might not remind one of Christmas directly, but I think it has a real Christmas feeling to it, as well as being so beautiful at the same time! It shows a boulevard by the Seine river with lots and lots of snow. It emphasizes the painter’s strong connection to the seasonality of the weather and its colors. Monet‘s way of presenting this scene – not simply a winter landscape – shows how strongly influenced he was by the Ukiyo-e prints popular during his times.