The Story of Girl at Mirror by Norman Rockwell 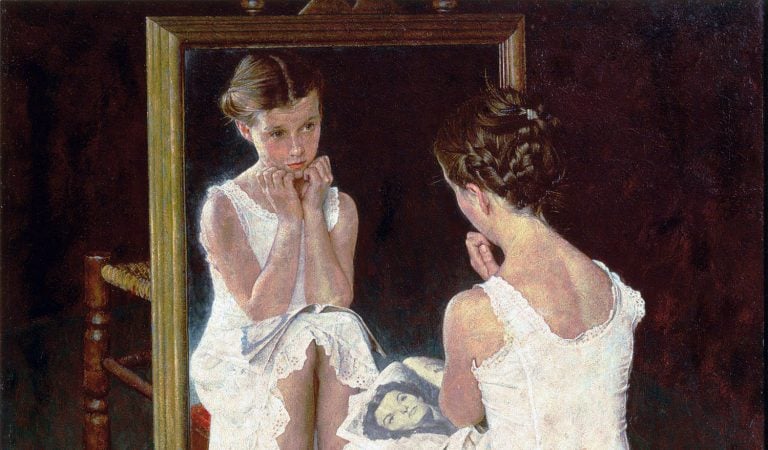 Do you know the Snow White fairytale? Girl at Mirror by Norman Rockwell would certainly be a contestant to Snow White’s wicked stepmother as she is a pretty girl with brown hair and a white dress. Out of all of Rockwell’s artworks this is perhaps the most beautiful one. Even though it is a figurative composition, the painting is charged with an abstract atmosphere.

Yet, despite the beauty of the painting, or perhaps precisely because of it, something strikes me deeply when I look at it – the girl’s gaze. She looks at herself, analyzing her own face. Her forehead, slightly furrowed, looks worried, though. But what could a little girl in a Rockwell painting worry about?

First of all, let me introduce you to Norman Rockwell. He was brilliant at portraying American daily life from an idealistic point of view. Born in New York in 1894, he began studying art as a teenager and began illustrating magazines at a very young age. He quickly became an illustrator for The Saturday Evening Post, a weekly magazine in publication since 1821. This work gave him a lot of prestige and renown.

Rockwell’s style is remarkable. Despite this, his work was sometimes considered “minor” by some critics because he used elements of pop culture in a context that was closer to a more “refined” aesthetic. Perhaps the critics were surprised with this mix of registers, yet what they viewed as a defect turned out to become Rockwell’s trademark. Like no other artist, he showed America beyond pop culture, a nostalgic country full of feelings. While I adore the artist and could spend whole texts writing about him, let’s go back to the Girl at Mirror.

Girl at Mirror was originally created for the cover of the March 6, 1954 issue of The Saturday Evening Post. The image is full of extremely symbolic and very insightful elements. The girl looks apprehensively at the mirror. On her lap we see an open magazine showing a photo of the actress Jane Russell who, alongside Marilyn Monroe, starred in the movie Gentlemen Prefer Blondes. At her feet, the girl has a comb, a brush, and lipstick (red, of course). Meanwhile at the corner of the mirror, we see a forgotten doll, discarded without much care.

These elements give us a clear message: the girl is no longer a little girl. She discarded her dolls and wants to look as beautiful as the woman in the magazine. Even so, her apprehensive face, which is seen in the mirror, shows doubt – is it really time to grow up?

The model, Mary Whalen Leonard, says that despite the way the painting was perceived, during the posing she was just enjoying herself. She was not comparing herself to movie stars or casting her dolls aside for dreams fueled by red lipstick. All in all, all of this in fact matters only a little. The sweetness of this work is undoubtedly the best aspect of it.