Not Only Queen’s Gambit – Chess in Art 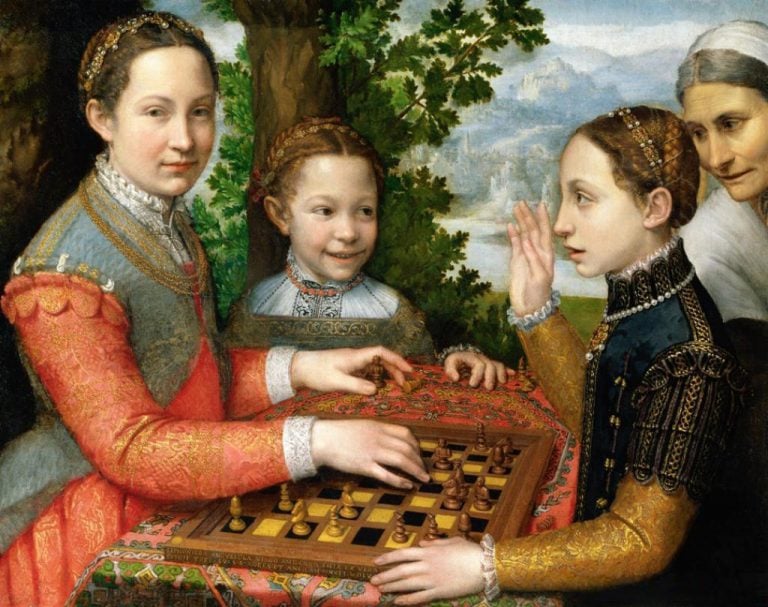 Duchamp’s Pipe: A Chess Romance. The Marriage of Man and Mind

The Lewis Chessmen and Their Long-Lost Brother

Since October, the world, with many places in lockdown again, has found a new way to entertain itself. The Queen’s Gambit series, produced by Netflix, has taken the world by storm and inspired many people to take up chess. A fantastic novel of the same name, written by Walter Tevis and published in 1983, inspired it. If you have a moment or need a break from practicing your next chess opening, join us in exploring the world of chess in art.

Chess is believed to derive from the Indian game of chaturanga. It reached Europe via Persia and Arabia in the 9th century, through the Umayyad conquest of the Iberian Peninsula. The game must have become pretty popular, as the example of the Lewis Chessmen proved. It’s thought that they might have belonged to a trader who was traveling from Norway to Ireland to sell them. Discovered in 1831 on the island of Lewis in the Outer Hebrides of Scotland, the group consists of 82 pieces owned by the British Museum, 11 pieces at the National Museum of Scotland, and an additional piece discovered in July 2019.

The pieces were probably made in Trondheim, Norway in the 12th century, and most of them are carved in walrus ivory. During that period, the Outer Hebrides, along with other major groups of Scottish islands, were ruled by Norway. In 2001, the chess pieces reached new audiences through the first Harry Potter film, Harry Potter and the Philosopher’s Stone (Sorcerer’s Stone in the American release). In wizard’s chess, the pieces are enchanted and move by themselves.

As you can see, despite professional chess still being dominated by men, by no means was it unusual for women to play the game as well, even in the early 16th century. In this painting by Lucas van Leyden, you can see a couple playing, the woman considers her next move, observed by the audience. The man is busy pretending not to care, but he is clearly losing. Van Leyden was only 14 years old when he painted this work, and yet to get to know his mentor Albrecht Durer, who would introduce him to the correct perspective. If you are interested in the analysis of the game the couple plays you can find it here.

This is one of the most famous paintings by Sofonisba Anguissola and also more proof that chess was for centuries a game popular among women as much as men. The Chess Game depicts three of Sofonisba’s sisters: Lucia (left), Europa (middle), and Minerva (right). They are enjoying a relaxed moment playing chess accompanied by the governess who is looking over at the game. This servant appears to suggest the virtue of the young girls, also she offers to the viewer a contrast in age and class to the nobility of the girls. Giorgio Vasari had a chance to see the painting while visiting the family’s home in Cremona and certainly appreciated Sofonisba’s skill. Just look at the girl’s rich clothes and beautiful headbands! And their lively faces, each reflecting a different emotion.

Look at the focus here, the men have no time to look at us, so the only attention we get is from the cute dog. The dog watches us carefully, lest we make a noise that would disturb the men’s concentration.

Born in Bologna in 1555, the son of a butcher, Lodovico Carracci grew up under the same roof as his cousins Agostino and Annibale. Together they founded an academy. It focused on drawing from life and offered an opportunity to study optics, anatomy, and other subjects considered important to painters. In the mid-1590s, Annibale and Agostino moved to Rome. Lodovico remained in Bologna heading the academy and developed a thriving career in the city. He typically specialized in religious scenes, so this intimate painting is not typical for him.

In 1757, the Queen of Sweden, Louisa Ulrika of Prussia, received a “gift” from Danish politician Anders von Reiser – a 7-year-old boy of African descent.

The queen had been reading the writings of French philosopher Jean-Jacques Rousseau, particularly about the origin of man and civilization. She decided to raise the boy with her own children. He grew up as a playmate to the royal children, who were brought up in a more restricted way than he was. Badin was allowed to speak to them in a natural way and even fight and tease them, which was considered scandalous. Contemporary diaries describe how he climbed on the thrones of the king and queen, called everyone “you” instead of using their titles, and talked rudely to the nobility. He was very witty and verbal.

Originally called Couchi, they gave him name Badin, the French word for trickster or joker. He was described as an intelligent and reliable person with self-confidence. Even though he knew about many of the secrets of the royal family and the court, he never revealed anything and was very loyal to the royal house throughout his life.

Here we see him in beautifully rich clothing. He is jokingly looking at us as if inviting us to challenge him to chess. He is also warning us with the lifted finger of his left hand.

Almost 300 years after Lodovico Carracci’s painting, Honoré Daumier also approached the topic of chess, again showing us two men deeply immersed in the game they play. The men wear simple clothing and their attention is on the board, where also the tension between them converges. Daumier is mostly known as a printmaker and caricaturist, but here he shows his mastery of the painterly medium. Also, he abandons his usual irony and sharp wit to give us a quieter and more subtle scene.

Duchamp famously said that “all artists are not chess players, but all chess players are artists.” He was an avid chess player and loved its conceptual nature and its utter purposelessness. He played his entire life and even hoped to pursue a professional career at some point. Chess also often figures in his art throughout his career. His brothers Raymond Duchamp-Villon and Jacques Villon taught him chess in 1900, when he was thirteen. From 1910 there were regular Sunday games with the Puteaux group of Cubist artists – which Picabia joined a year later.

When he moved to New York, Duchamp became a central figure in the late-night chess sessions at the Arensbergs’ regular salons. Later in life, Duchamp played every day from 6 pm and often well into the night. He married his first wife Lydie Sarazin-Levassor in 1927. According to Man Ray, one night Duchamp stayed up to study a game and left the pieces in position to continue the next day. On waking, he discovered that the disapproving Lydie had glued the pieces to the board.

Duchamp invited his long term chess opponent George Koltanowski to collaborate on his exhibition The Imagery of Chess (1944) at the Julien Levy Gallery. There Koltanowski played chess blindfolded against seven players at once: Julien Levy; Frederick Kiesler, an architect; Alfred Barr, director of the Museum of Modern Art; Xanti Schawinsky; Vittorio Rieti; Max Ernst and Dorothea Tanning. The event was refereed by Duchamp, and the exhibition featured works from 32 artists — the number of pieces in a chess set — including Breton, John Cage, Alexander Calder, Ernst, Arshile Gorky, Roberto Matta, Robert Motherwell, May Ray, Kay Sage, Yves Tanguy and Ossip Zadkine.

Originally this painting was meant to be a study for a larger piece presenting The Howard de Walden Family. However, it later became this lovely independent canvas. The girls enjoy a relaxing, maybe weekend, morning, lazily pondering the chess game they are playing. You can find the analysis of the position here. Sir John Lavery was an Irish painter, most famous for his portraits and wartime scenes from WWI.

Super Chess is an unusually large painting in the oeuvre of Paul Klee. The fields on the chessboard constitute a basic pattern. We can see that the game has run its course. The red “super- king” has dominated the board over the last of the blue pieces. It is unknown whether Klee intended this painting to be a commentary on the totalitarian ferment of the 1930s. In the year he created this painting, seventeen of his other works were included in an exhibition of “Degenerate art.” Additionally, the Nazis seized 102 of his works in public collections. By that time he was already living in Switzerland for four years and his health was declining due to scleroderma.

What is it about chess that is so seductive to people throughout the ages? Is it the combination of relatively simple rules with endless combinations of possible games? The fact that anyone really can play? Maybe not at a professional level, but still. And what makes it so popular with artists? Maybe the rhythm of black and white squares and beautifully simplified and familiar shapes of the pieces. One thing is for certain: as much as the game has been popular for centuries, Queen’s Gambit brought it into the limelight once more.