The Lewis Chessmen and Their Long-Lost Brother 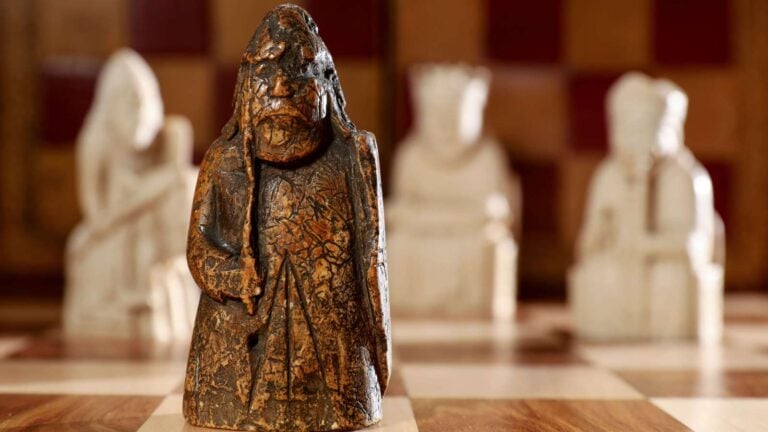 The Lewis Chessmen are among the world's most recognizable works of medieval art, right up there with the Unicorn Tapestries and the Book of Kells. Not only are reproductions of the chessmen best-selling chess sets, but they also appeared as the chess set that Harry and Ron use in the first Harry Potter movie.

Recently, a long-lost Lewis Chessmen was rediscovered by the heirs of a Scottish antiques dealer. He had purchased it for about £5, but it will soon sell at Sotheby's auction house for as much as £1 million.

What's the story behind the Lewis Chessmen? Where did they come from, and how were they found?

The Lewis Chessmen are a set of medieval walrus ivory chess pieces that date from the late 12th-early 13th centuries CE. They get their name from the Isle of Lewis, in Scotland's Outer Hebrides, where they were unearthed in the 19th century. However, they're actually of Scandinavian origin, probably Norwegian or maybe Icelandic.

Not counting this recent find, there are ninety-three pieces in the hoard - kings, queens, bishops, knights, warders (rooks), non-figurative pawns, and several non-chess playing pieces. Altogether, the hoard is just a few pieces short of making four complete chess sets. The British Museum in London owns eighty-two pieces, and the National Museum of Scotland owns eleven. So, the opportunity for a private individual or another institution to acquire one of these chessmen is pretty rare.

Far from just being a very-old chess set, the Lewis Chessmen are really memorable because of their expressive and almost cartoonish features. All of the pieces are very detailed, with earnest and worried-looking faces. Many hold their hands to their faces as though in concern, and they clutch staffs or weapons. The kings, queens, and some of the bishops sit on lovely decorated chairs. As quoted in the Sotheby's press release, a member of the seller's family mentioned the piece's "quirkiness", and that's really a perfect description. It's particularly fitting for the berserkers, warders (rooks) representing warriors who have wide eyes and bite their shields. Berserkers were frenzied and ferocious warriors from Norse legend, but they look more charming than terrifying today.

The newly-discovered chessman is also a warder with a sword and shield, but he's a stoic-looking little guy instead of a wild berserker. Experts say that he's a perfect match to some already-known warders among the Lewis Chessmen. Being separated from the rest of the hoard has caused him to have a much darker surface color than the other pale figures, though they were all originally colored.

While their physical features are so expressive, much else about the Lewis Chessmen is surrounded by mystery. They were discovered by a local on the Isle of Lewis in 1831, but nobody knows how they came to be buried there. The most widespread theory is that they were owned by a merchant who buried them after a shipwreck to avoid paying taxes and never came back to reclaim them. Naturally, there are also many more elaborate theories.

Aspects of the figures like the clothing and weaponry have helped scholars date the Lewis Chessmen to c. 1150-1200 CE. Stylistic details and the existence of similar chess pieces in the city of Trondheim suggest that the Lewis Chessmen were made in Norway, which owned Scotland at the time and had a strong tradition of ivory carving. However, some scholars believe that they may have come from Iceland instead. One theory suggests that they were the work of celebrated Icelandic ivory carver Margaret the Adroit. This theory isn't universally accepted, though Nancy Marie Brown wrote an excellent book arguing the point. It's called Ivory Vikings: The Mystery of the Most Famous Chessmen in the World and the Woman Who Made Them (St. Martin's Press, 2015), and it's a delightful read.

The newly-rediscovered Lewis Chessman will be auctioned at Sotheby's London on July 2th, 2019. You can learn more - and find out how to bid, if you're so inclined - on the Sotheby's website.