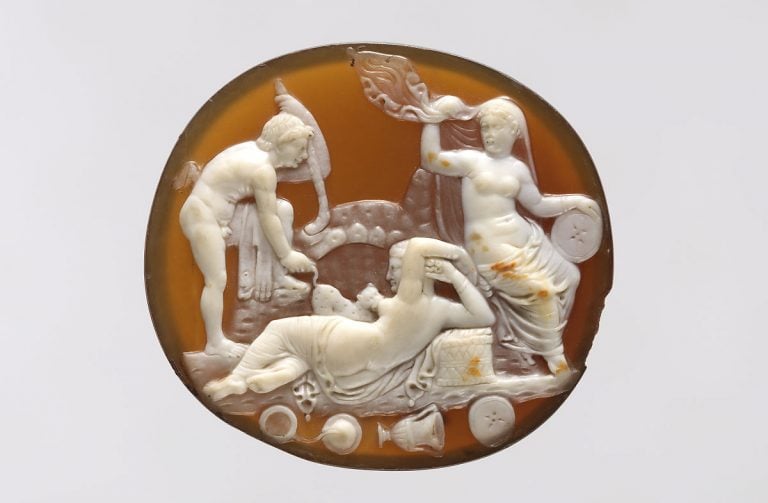 Cameo carving has existed since long before ancient times. These cherished treasures were often made of hardstone, seashells or coral. Historically, cameos functioned as ornamental status symbols and talismans. Cameo jewelry added flair to fashion during the Victorian era. Here’s a brief overview of the shifting popularity of cameos throughout the ages.

Cameos of Ancient Greece and Rome

Cameos of the ancient world were highly revered as status symbols for the wealthy. They were also considered amulets of protection. Cameos during these periods were manually carved from hard stones that included amethyst, agate, onyx and even glass. Cameo signet rings were popular items, and many household objects, such as furniture and vases, were also decorated with them. Popular subjects included symbols, animals, and portraits commemorating rulers.

The largest cameo created in the ancient world was the Gemma Augustea, meaning ”gem of Augustus.” This gigantic cameo, created during the reign of Emporer Augustus, was carved by Dioskourides from Arabic onyx. The impressive medallion consists of two reliefs depicting a crowded narrative with a political message.

Cameos of Medieval Times were typically carved from carnelian, chalcedony and jasper. Christian religious motifs were popular, and many cameos functioned as symbolic amulets and reliquary decorations.

Cameos of the Renaissance were usually collected and displayed in cabinets. As their popularity grew, they were made into jewelry and other decorative objects. The trend for cameo jewelry quickly spread throughout Renaissance Europe, and many royal families supported this glyptic art form. King Henry IV of France and Elizabeth I commissioned their cameo portraits. Pope Paul II also cherished these tiny treasures and donned several cameo rings.

Master ceramicist Josiah Wedgwood (1730–1795) was an English potter greatly inspired by the art of cameo carving. Wedgwood invented jasperware, and is most famous for his powder blue matte finish known as ”Wedgwood Blue”  His jasperware objects were often embellished with decorative reliefs referencing his admiration of cameos. Wedgwood’s unique cameo-esque creations covered a range of objects from vases to snuff boxes to jewelry and teapots.

Cameos enjoyed an explosive revival during the Victorian Age, and cameo jewelry was all the rage by the mid-19th century. Popular motifs included the Greek deities, the mythical gorgon, Medusa, and scenes from the Bible and history. Women of the upper and middle classes showed off their cameo bling in the form of brooches, earrings and pendants while men sported cameo watch hobs or rings.

Hardstones weren’t the only natural material used for cameos; cornelian shell and red coral were also quite popular for cameo carvings of the Victorian Era. Cameos fashioned from red coral were believed to ward off evil spirits. During the late 17th century, tourists to Pompeii were fascinated by cameos carved from lava rock and brought them home as souvenirs.

Cameos have once again seen a comeback. Nowadays, ordinary people can order customized cameo portraits to commemorate a loved one or a pet. Contemporary artists Catherine Opie and Cindy Sherman collaborated with art patron and collector Liz Swig in 2019 to create cameos based on the photographs of the two artists. Celebrity Sarah Jessica Parker wore a giant cameo necklace to the 2016 Met Gala. Italian designer Amedeo Scognamiglio, a.k.a AMEDEO, designs contemporary cameo jewelry worn by many celebrities at red carpet events. The art of cameo carving continues to be appreciated, and these precious keepsakes live on.