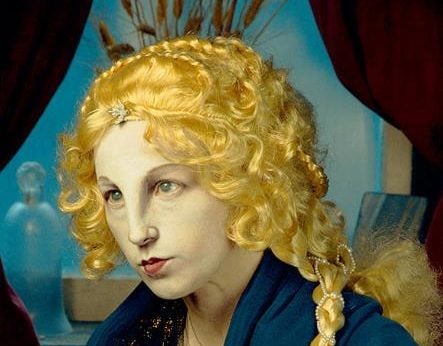 How Cindy Sherman Shaked The Art World With Instagram

Time for a little quiz for all those who consider themselves experts in the Old Masters! We will show you photographs made by Cindy Sherman, a contemporary American photographer, which reference famous portraits from art history. See how many of the inspirations in Cindy Sherman’s Old Masters photos you can guess.

Cindy Sherman’s photographs focus on inventing personas or tableaus that examine the construction of identity, the nature of representation (especially female!), and the artifice of photography.

Sherman always prepares her images from scratch as she assumes the multiple roles of photographer, model, makeup artist, hairdresser, and stylist.

Sherman works in series, with each being self-contained and internally coherent, but all of them are at the same time connected by recurring themes such as the grotesque, the mythical, or gender and class identity.

Her History Portrait or Old Masters series of 35 photographs blend postmodern consciousness with timeless masterpieces (or the tropes that they represent) of European masters. Cindy Sherman’s Old Masters series was created during the years 1989 and 1990 while she was living in Rome, but as she recalled:

When I was doing those history pictures I was living in Rome but never went to the churches and museums there. I worked out of books, with reproductions.

Cindy Sherman, quoted in Michael Kimmelman, “AT THE MET WITH: Cindy Sherman; Portraitist In the Halls Of Her Artistic Ancestors“, New York Times, 19 May 1995.

Is this why they all bear a disquieting quality? For their open artificiality and unsettling use of props?

The first inspiration behind Sherman’s photograph was (we hope you guessed!) Sick Young Bacchus by Caravaggio. This painting is believed to be an early self-portrait of the artist. It was most likely painted around the time when Caravaggio arrived in Rome and then spent six months in a hospital. There are various hypotheses on which illness was depicted here. The painting has been analyzed by many health specialists, who suspect malaria or anemia.

Apart from this, the artwork was an excellent advertisement for the artist as it is a portrait, and also includes elements of still-life. A perfect sample of Caravaggio’s work!

The second photo comes from the right wing of the Melun Diptych, one of the strangest depictions of the Virgin Mary in art history. Sherman perfectly mirrors the strange, round, almost Cubist breast. However, she didn’t represent the unusual red and blue cherubs from the background.

Another masterpiece from Cindy Sherman’s Old Masters series is La Fornarina. A painting by a master of High Renaissance – Raphael. This portrait stayed in the artist’s studio until the day of his death. Maybe it was a picture of his lover? Some believe it could be Margarita Luti, a woman whom Raphael wanted to marry, but she refused.

The last of Sherman’s artworks (how many did you manage to guess?) is modeled on Judith Leaving the Tent of Holofernes by Botticelli. It is a popular biblical story depicted by many artists throughout centuries. Judith, a young Jewish widow, decided to save her people from their enemy – King Holofernes of Assyria. She pretended to be attracted to the man and offered herself as his lover in order to behead him while he slept, saving her people from the Assyrian reign. In this depiction of the subject, we see Judith leaving Holofernes’ tent with his severed head.

Did you recognize all the paintings that inspired Cindy Sherman’s Old Masters photographs?

The Enneagram Types in Art – Of Amazing Painters, Paintings and Diagrams

If you are anything like us, your social media feed is probably full of quizzes! From “What is your ideal decorating style?” to...

Do you like games? Your mission in today’s game is to identify seven differences between the artworks of Lucas Cranach the Elder that I chose...

Epiphany Quizzed: What Do You Know?

Epiphany had been a popular subject in painting already in the Middle Ages, yet it became a topos during the Renaissance when each respected painter...