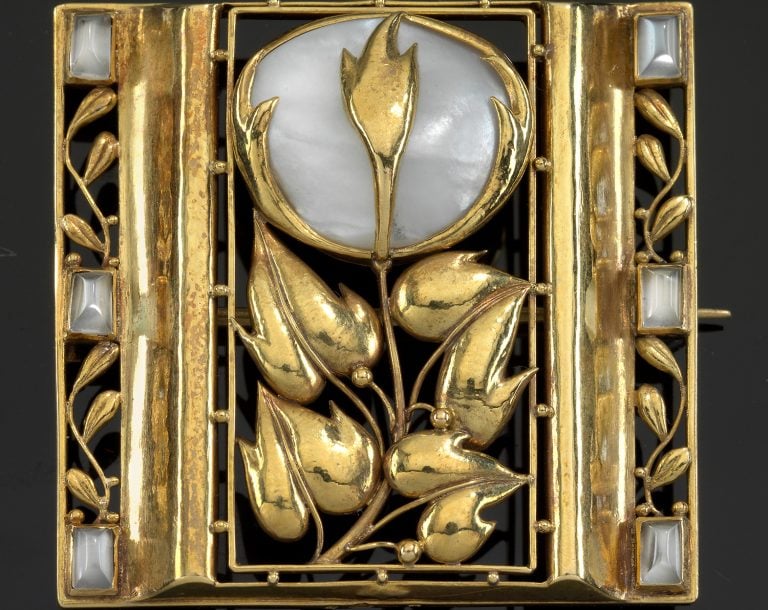 Josef Hoffmann was the leading architect of the Secession and pupil of Otto Wagner, close friend and collaborator of Gustav Klimt and Koloman Moser, and the most successful designer of the Wiener Werkstätte. He was also an advocate of the philosophy of integrity of the arts, a Gesamtkunstwerk (the total work of art), which he consistently applied not only to large architectural and interior design projects but also to fashion, furniture, tableware and jewelry. Discover Josef Hoffmann’s jewelry pieces!

As long as our cities, our houses, our rooms, our cupboards, our everyday appliances, our clothes, our jewels, as long as our language and feelings do not represent the spirit of our age in a purer, simpler and more beautiful way, we shall remain infinitely backward compared to our ancestors (…).

Jewelry was in fact among the first items produced by the Wiener Werkstätte and remained the mainstay of the firm for 30 years of its activity. Quickly did its original and singular pieces become the most sought-after jewelry items of the time, appreciated by the Viennese high society for their unprecedented personalization aimed at reflecting the wearer’s individuality. Already in 1898 Hoffmann said in Das individuelle Kleid  (The individual dress) that he “would like an element of dress and the way in which dress is worn, to be (…) familiar so that we can recognize it as being in accord with the wearer’s character“ and Marianne Hussl-Horman argues that Josef Hoffmann’s jewelry can be read as portraits of its wearers.

At the same time, the projects are extremely versatile and can be considered as autonomous works of art. This autonomy is achieved by means of stark geometry which extracts from a piece an almost abstract quality, and which is enhanced by the omnipresence of the square, the core shape of Hoffmann’s entire aesthetic. He considered it a perfect manifestation of his concept of frame, which he believed should unite all aspects of life making it a total work of art, the Gesamtkunstwerk. Square was so pronounced in his architecture (e.g. Purkersdorf Sanatorium), furniture and tableware (from chairs to fruit baskets), and fabric designs, that it earned Hoffmann the nickname Quadratl (Little Square).

However, around 1905 Hoffmann reimagined his abstract geometry and began endowing his designs with a lighter quality. This change in his style was a result of the Viennese “rediscovery” of Japan at the beginning of the 20th century, as well as Hoffmann’s friendship and increased professional collaboration with Klimt, with whom Hoffmann shared precisely the same circle of patrons.

With the Secessionists dedicating their sixth exhibition of 1900 entirely to Japanese art and design, and the Museum of Art and Industry following the suit a year after, Hoffmann had an opportunity to admire the mastery with which Japanese designers married geometry with vegetal patterns. Inspired by their organic and harmonious unions of the seemingly contradictory components, Hoffmann began to combine floral arabesques like stylized leaves, vines, or flowers, with squares which nevertheless were retained as the overarching geometric outline for all the designs.

Josef Hoffmann’s jewelry designs for Wiener Werkstätte, so monumental in their minimalized architectural forms, challenged the previous aesthetic boundaries for applied arts, as they united a painterly and handcrafted Arts & Crafts quality with a unique modernist vision of a modern style, in which architecture was not anymore a sterile antithesis of a craft.