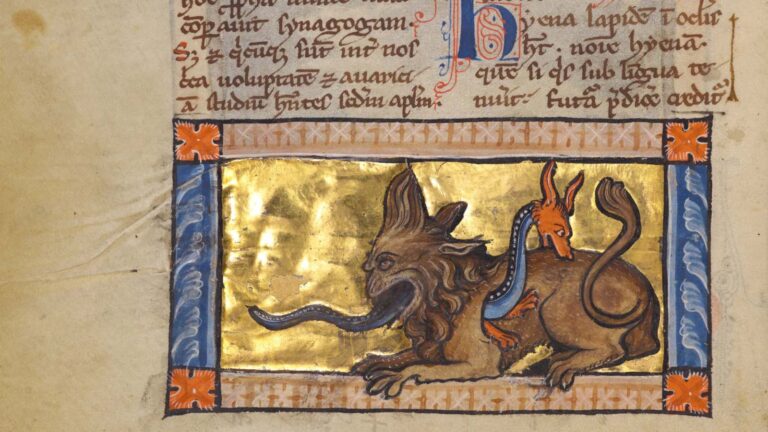 What If The Animals From Medieval Bestiaries Could Move…

Of all the medieval manuscripts, bestiaries are definitely the most fun. A medieval bestiary is a book about animals. It’s full of unusual information and charming illustrations about a variety of creatures.

Bestiaries were based on an early Christian text called the Physiologus and works by Herodotus, Pliny the Elder, Isidore of Seville, Aesop, and others. All of these texts contained moralizing allegories about animals and other features in the natural world. So, the medieval bestiary attributed traits to animals and then made Christian moral lessons from them.

Animals could have positive or negative attributes. For example, the pelican was believed to peck its own breast to resurrect its dead children with its own blood. This was good, since it was an allegory of Christ’s Resurrection. On the other hand, the monkey had strongly negative connotations, and its lack of tail was seen to parallel the devil’s lack of Scripture.

Turn the pages of a medieval bestiary, and you’ll encounter creatures, illustrations, and statements that would definitely surprise any zoologist today. That’s because bestiaries weren’t based on scientific observation, a concept that didn’t even exist in the Middle Ages. Legends, folk beliefs, and travel accounts were the main sources of information. Such tales could hardly be reliable, which is perhaps why bestiaries included animals like the bonnacon, which was thought to fling its own flaming poop in self-defense.

Most medieval Europeans, including bestiary creators, had never encountered creatures native to other lands, so they had no idea how such animals would look or act. It’s no wonder then that medieval representations of crocodiles look more like wolves or lions than reptiles.

Medieval bestiaries also include many creatures that are just plain fiction, because people had no way to distinguish between the mythical and the merely exotic. If an elephant could exist with massive ears and long trunk, why not also a phoenix, who resurrects itself from its own ashes and makes such a great Christian allegory?

The medieval bestiary may seem naïve to modern viewers, but it’s still a great source of delight and can inspire the imagination. You can explore the whole menagerie at The Medieval Bestiary and in Janetta Rebold Benton’s book The Medieval Menagerie: Animals in the Art of the Middle Ages. (New York: Abbeville Press, 1992).