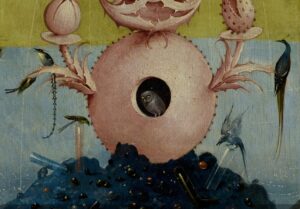 Hieronymus Bosch was an Early Netherlandish painter. He must have lived in two worlds simultaneously – the real one and a world of his imagination. His work is known for macabre and nightmarish depictions of hell, fantastic imagery, detailed landscapes, and illustrations of religious concepts and narratives. There are also hoards of weird creatures to find in Bosch paintings, creepy owls among them.

An owl is one of the motifs that regularly appear in his works. If you were to count the owls in all his paintings, Hieronymus Bosch was probably the most owlish major artist of all time. All of them, painted in a very realistic manner, keep a watchful eye. There is a lot of speculation about what his owls ‘mean’ and how they should be read. The seemingly multiple and sometimes contradictory meanings which have been associated with owls over time don’t help this.

Sometimes they might signify wisdom, other times ignorance; they may bring the comfort of sleep at night, or be harbingers of murder and the occult. However, it seems that around 1500 the owls were generally associated with menace and death and had an emblematic, moralistic significance. For example, popular at the time, The Dialogue of Creatures tells the story of a long-eared owl who wanted to rule over other birds. It seems that Bosch generally used it as a symbol, placing it in contexts with an atmosphere of menace. As if to emphasize the threatening presence, he sometimes drew an owl surrounded by other, hostile birds that try to drive the owl away.

In this Ecce Homo the owl is peering out towards us from the alcove in a brick wall next to the soon-to-be crucified savior. It is staring at us, making sure that the whole scene is having a proper impression on us.

Here Bosch used the owl’s presence as a way to mock his characters’ folly. A large wagon of hay is surrounded by a multitude of fools, engaged in a variety of sins. An angel on top of the wagon looks to the sky, praying, but none of the other figures see Christ looking down on the world. Only the owl is watching.

3. The Wood Has Ears, The Field Has Eyes

This drawing features an over-sized little owl in the hollow of a dead tree. Furthermore, this is an allegorical image, a visual expression of the Dutch virtue of discretion. The Latin text at the top reads: “Poor is the mind that always uses the invention of others and invents nothing itself”.

4. The Garden of Earthly Delights

In the left of the center panel, a man hugs a giant owl. While the owl has long been a symbol of knowledge, in Bosch’s hell “knowledge” was frowned upon as a reminder of the fall from grace.

The owl, commonly regarded as a symbol of wisdom, can also represent several cynical ideas in Christian imagery.

Although they claimed to be wise, they became fools and exchanged the glory of the immortal God for images made to look like mortal man and birds and animals and reptiles.

Another owl can be found in the left panel, in the eye-catching fountain in the center. The owl can represent those who, preferring darkness to light (like the owl), rejected Jesus and God. This could be significant since Adam and Eve rejected God by eating the forbidden fruit. More likely, the owl here is viewed as a robber-bird, which stands for foolishness, blindness (as he cannot see in the light, or see the light of Christ) and a bird which accepts the fact that there is evil in the world and does nothing to prevent it.

Here in the upper right corner, we can see a group of figures plucking fruit from a tree. Below there are two cherry-adorned dancing figures, seemingly partly covered by an egg, on which an owl is perched.

This is one of only three autonomous drawings by Bosch; it is not a preparatory study but a work of art in its own right. It has a remarkable perspective with its close-up view of a gnarled treetop with three owls and other birds set against a broad landscape with villages.

Autumn is a period of transition. The hot, sunny days of summer become grey and shorter. The trees, lightened of their fruits, unwind to the extent...

One of the phenomena that developed in the last 12 months is that of ‘pandemic puppy’. If you took one we hope you are happy together! But if you...

Dachshunds were first bred around the 15th century in Germany. Their primary purpose was to hunt small animals, particularly badgers, and they are...