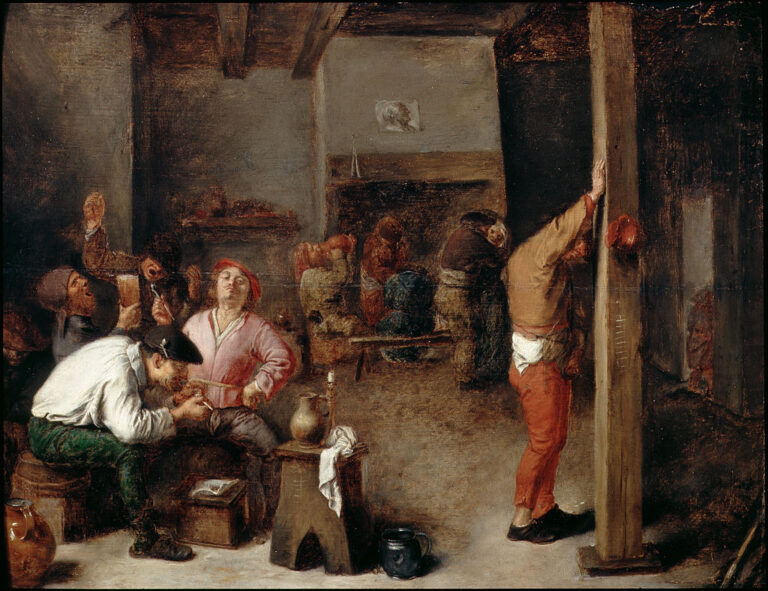 Do You “Pronkstill”Even? Social Media of the Dutch Golden Age

The work of the Flemish Baroque painter Adriaen Brouwer excels in innovation and daring. His folk scenes, often showing drunkards and smokers in pubs, in which he emphasized the emotions of the portrayed, were extremely rare in his time.

Adriaen Brouwer was born probably around 1605 in the Flemish city of Oudenaarde, my hometown. His father worked as a designer in one of the most famous antique Flemish crafts: the carpet industry. Around 1613, the family moved to Gouda in the Netherlands. In that period Adriaen Brouwer came into contact with the art trade, becoming in Haarlem a pupil of the famous painter Frans Hals.

A few years later, when he was about 25 years old, he moved to the Flemish city of Antwerp. Antwerp was at that time the place to be for painters. For example, it had the presence of such world famous artists as Pieter Paul Rubens, Anton van Dyck, and Jacob Jordaens. Brouwer became close friends with both Rubens and Van Dyck. The evidence of this is facts such as that the painters collected his work and van Dyck painted Adriaens’ portrait. Additionally, Rubens bailed him out of prison and later arranged for his funeral.

Despite these contacts and the membership of the Saint Luke Guild of Antwerp (the guild of artist painters), less than 10 years after his arrival in Antwerp, Brouwer died as a poor man in 1638.

Although in 1627 the poet Pieter Nootmans named him the ‘Painter of Haarlem’, it was in Antwerp that Adriaen Brouwer had his most fertile period. Yet because of his exuberant lifestyle, he often got in trouble with the court. More than once he had to flee his creditors. A spicy anecdote tells that the Spaniards imprisoned him in the citadel of Antwerp for political reasons. This was a result of having been accused of espionage for the Dutch Republic. According to other sources, he evaded taxes and accumulated such high debts that he had to serve a sentence. Eventually, he was released thanks to the intervention of none other than his friend, Rubens.

What I call the innovative character of Brouwer’s work, is reflected in the scenes that take place almost exclusively in pubs, showing dancers, card players, smokers, and drinkers. These lively scenes show a sharp skill of observation. It is a pure pleasure to look at his works and to discover all the details. A remarkable feature of Brouwer’s painting is that he is one of the few painters who shows his characters expressing extreme emotions. For example, the men and women shout, yawn, or sing loudly. Emotions such as joy, pleasure, but also pain and fear, are recurrent in his oeuvre.

Adriaen Brouwer preferred to paint ordinary people: farmers, soldiers, and people from the lower class. These characters appear to have no sense of embarrassment at all.  In one of the paintings he portrays life as it really happened in the pubs in the 17th century, with himself as the protagonist. In The Smokers, below, he keeps his eyes wide open, has a cup of beer in his right hand and lets the smoke from his pipe come out of his mouth. Few contemporary artists depicted themselves like this. He is therefore considered a very modern artist. That is to say, he did not pay much attention to what was then the “distinguished” standard. Instead, his paintings contributed to the genre of “tronies”, i.e. paintings exploring different varieties of expressions.

At the end of his life, Brouwer painted also some landscapes. These paintings had a great influence on the next generation of Flemish and Dutch painters.

Only 60 works have been ascribed to him. Some of them he signed, but none at all have dates. Other painters have copied many of his works. This is a fact which regularly raises doubts about the originality of the works.