A Woman with A Knife: The Story of Lucretia 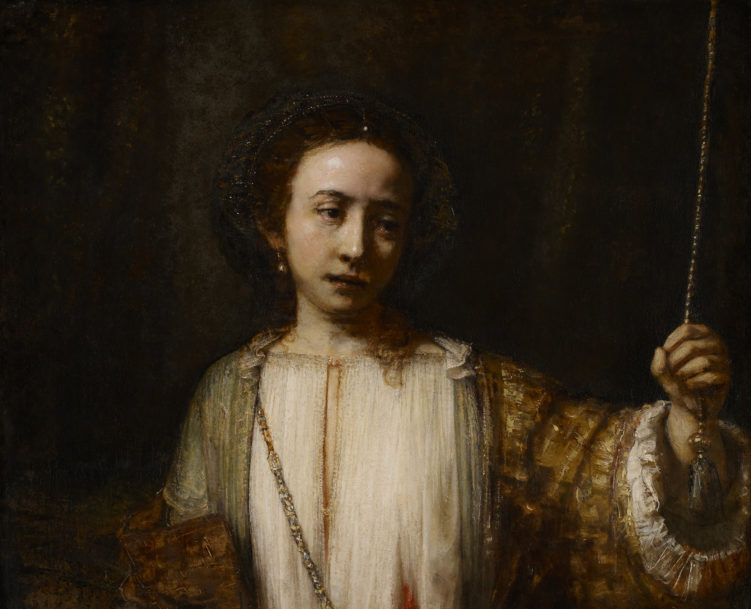 If you see a woman with a knife on a painting – think Lucretia. She was an ancient Roman heroine whose fate played a vital role in the transition from the Roman Kingdom to the Roman Republic. Her suicide after having been raped by an Etruscan king’s son was the immediate cause of the anti-monarchist rebellion that overthrew the monarchy.

The story goes like this: Lucius Tarquinius Superbus, last king of Rome, being engaged in the siege of Ardea, sent his son, Sextus Tarquinius, on a military errand to Collatia. Sextus was received with great hospitality at the governor’s mansion, home of Lucius Tarquinius Collatinus. Lucretia was Collatinus’ wife, who received him as an honored guest.

But, at night Sextus entered her bedroom by stealth, quietly going around the slaves who were sleeping at her door. She awakened. He introduced himself and offered her two choices: she would submit to his sexual advances and become his wife and future queen, or he would kill her and one of her slaves and place the bodies together, then claim he had caught her having adulterous sex.

The next day Lucretia dressed in black and went to her father’s house in Rome and cast herself down in the supplicant’s position, weeping. Being asked to explain herself, she insisted on summoning witnesses first and then she confessed what happened. She called on him for vengeance, a plea that could not be ignored. While the magistrate of Rome were debating how to react, she drew a concealed dagger and stabbed herself in the heart, determined to end her life in order to reclaim her honor.

She died in her father’s arms, with the women present keening and lamenting. This dreadful scene struck the Romans who were present with so much horror and compassion that they all cried out with one voice that they would rather die a thousand deaths in defense of their liberty than suffer such outrages to be committed by the tyrants.

Overwhelmed by grief and anger, Lucretia’s father, her husband, and two accompanying friends swore to avenge her death. Lucretia’s rape and death triggered a revolt that led to the overthrow of monarchical tyranny and the creation of the Roman Republic.

Since the Renaissance, the suicide of Lucretia has been an enduring subject for visual artists. Most commonly, either the moment of the rape is shown or Lucretia alone at the moment of her suicide. In either situation, her clothing is loosened or totally absent, while Tarquin is normally clothed.