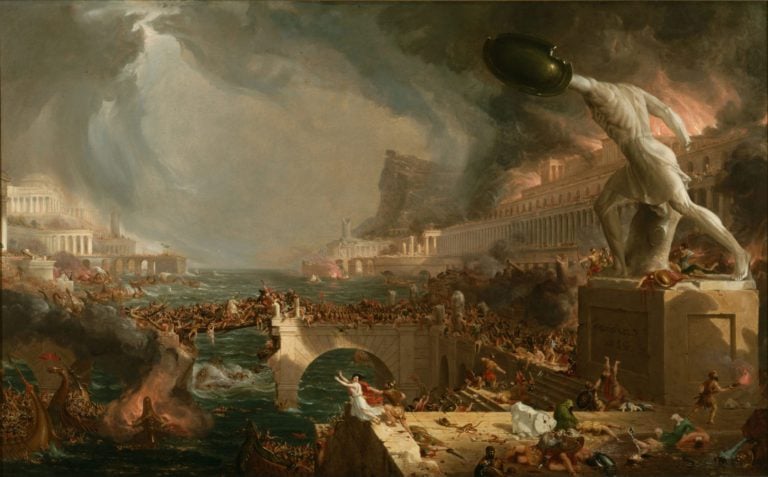 After many centuries, we are still wondering why the Roman Empire disappeared. There are many theories that try to explain it: wars, ideological problems, a chaotic political system caused by the enormous expansion of the empire, the climate, smallpox… However, I would like to put speculation aside and focus on how art has portrayed this epic moment in history.

The End of the Roman Republic

Let’s first have a quick recap of the events: in 387 BCE, Rome suffered its first sack by the Gauls. Between 134 BCE and 44 BCE, the Roman Republic found itself in crisis. It was a period of political and social instability that culminated in 44 BCE with the assassination of Julius Cesar, illustrated above, by Vincenzo Camuccini. In 27 BCE, the Roman Empire was established.

Between 235 CE and 285 CE, there were more than 19 different emperors; this led Rome to a true institutional crisis. This period is known as the Crisis of the Third Century. In 293 CE, The Roman Empire was so large that the imperial system developed into a tetrarchy, which lasted until 324 CE. The four co-rulers that governed the Roman Empire are depicted above, in this 4th century porphyry sculpture, embracing as a sign of harmony. After this point, the empire was split into two: the Western and the Eastern Roman Empire.

Artists have illustrated the various assaults on the city of Rome. Almost eight centuries after the first attack on the Eternal City, the second one occurred. The Visigoths had been trying to push back the Roman Empire frontiers for some time. They lay siege to the city on three occasions and after the third time they successfully defeated it. On August 24th 410 CE they entered and ransacked the city of Rome.

Here, Karl Bryullov portrays the attack that took place in 455 CE, which is the third sacking of Rome. In this case, the Vandals were at war with the western Roman Emperor Petronius Maximus. The artist creates a thrilling atmosphere, showing us the how the Vandals assaulted the city and took its women captive. In the background, the blue sky is being covered by a black and ominous cloud.

The Spanish artists Ulpiano Checa, painted the invasion of Rome by the Vandals in his eclectic style; the galloping horses captured in suspended motion. Here, he used a cold color palette and mixed elements taken from Impressionism and Academicism.

The Course of Empire

Probably the best known series of paintings that illustrate this episode is The Course of Empire by the English-born American painter Thomas Cole. The series portrays the rise and fall of an imaginary city. It reflects a popular American sentiment of the time; that considered the pastoral life as the ideal and believed Imperialism would inevitably lead to decline and decay.

The first two pictures, show the evolution of the city. The third in the series shows the glorious moment where the Empire reaches its apex. But the fourth one, reflects its fall into decadency.

Thomas Cole illustrated the destruction of the city amidst a terrible tempest. We can see the different scenes of the battle from the distance. The enemy is overthrowing the city’s defenses and attacking its inhabitants.

This is the final painting from the series. It shows the results after the destruction of the city. It is decades later but is representing the same point of view, only now of an abandoned place. The unoccupied architecture emerges from the invading wilderness. It’s an image that reflects desolation and pessimism, but one might still imagine what a glorious place this once was.

Cèlia is an Art Historian from Barcelona. She graduated specialized in contemporary art and finished her Research Master in Art and Design. She lived in Berlin for a year and came back to Barcelona where she worked as an Art Consultant. Her research focuses on the image, specially the post-photographic theory.